I now have formal confirmation of the five new character announcements as well as all of the rest of the new information from this week's magazine. Here we go, starting with the character profiles.

Mouri Motonari 毛利元就
Character image phrase: 詭計智将 Kikei Chishou ('Wily Strategist')
Seiyuu: Nakahara Shigeru
Weapon: Rintou ('ringblade')
Playable: Yes
Description: The supreme commander of the Mouri forces with his headquarters at Aki: Itsukushima. Motonari is also a detached schemer who employs ruthless tactics in order to guide his army to victory. On the surface he's working as one of Ashikaga's subordinates and mobilising his forces to unify the country, for the sake of making Aki the centre of the land of Hinomoto.

"The land of Hinomoto will become Aki; pave the way and become a pawn!"

Caption: Beginning with Meijite "Sha" where he calls archers to provide covering fire, Motonari's speciality is having many unique abilities which require placement.

(Note: I tried to save time by translating his profile from Sengoku Basara Magazine vol. 3 last night for this article. Except it turned out that it was a little different, so uh... here it is as a bonus!)

A ruthless tactician, Motonari perfects his selfish plans for one purpose: victory. With absolute confidence in his own schemes, he even views the lives of his subordinates as though they're his pawns. Motonari is distrustful of others and believes in his own abilities. He appears to be working for Ashikaga so that Aki Province can become the centre of the land of Hinomoto.

"Your paltry level of resourcefulness is no match for mine. My name is Mouri Motonari: a child of the sun!"

Shimazu Yoshihiro 島津義弘
Character image phrase: 一刀必殺 Ittou Hissatsu ('One Stroke, Certain Death')
Seiyuu: Ogata Kenichi
Weapon: Large sword
Playable: Yes
Description: The supreme commander of the Shimazu forces, Yoshihiro wields his huge sword as a master of the 'single deadly strike' Jigenryuu style. In this turbulent age full of battles between strong enemies, he spends every waking hour in combat to perfect his Jigenryuu. Many soldiers fear the way he relentlessly cuts down his opponents, and he's come to be known by the nickname 'Oni' ('Demon') Shimazu.

"Things like being respected as 'Oni Shimazu'...they're wasted on me now. I'm nothing more than a demon...a lone demon, without a name!"

Caption: Cancel with a unique ability when you have an opportunity!

"Appreciate it well! A most splendid gentleman is before you!"

Caption: Yoshiaki can use a variety of skills, such as stopping enemies from moving unpredictably or stabbing at them with his parade sword.

Caption: A 'two-shot' picture of the Demon King and the Splendid Gentleman together!?

Uesugi Kenshin 上杉謙信
Character image phrase: 神速聖将 Shinsoku Seishou ('Godlike Speed, Blessed Commander')
Seiyuu: Paku Romi
Weapon: Katana (Iai techniques)
Playable: No
Description: The supreme commander of the Uesugi army of Echigo, and a genius in combat feared as the 'God of War'. However, Kenshin shows no interest in seizing the country. Instead he postpones the confrontation with his rival Takeda Shingen and takes the position that Ashikaga Yoshiteru should rule the land of Hinomoto.

"I wield a sword guided by the heavens...come along and receive it."

Kasuga かすが
Character image phrase: 月下為君 Gekka Ikun ('Assisting Her Master In The Moonlight')
Seiyuu: Kuwatani Natsuko
Weapon: Kunai
Playable: No
Description: Kasuga appears as an enemy commander in this game; a 'kunoichi' who dedicates herself to serving her beloved Uesugi Kenshin. Her skill as a ninja is considerable yet she also loses sight of her surroundings when she becomes emotional. With Uesugi Kenshin not aiming to take control of the country, Kasuga is feeling frustrated about being aligned with Ashikaga Yoshiteru.

"That person's gaze makes me even more...intensely passionate..."

It seems that the link between these characters is that they have some kind of direct interest in Yoshiteru's activities (according to the magazine). So, what else was in the Weekly Famitsu article? 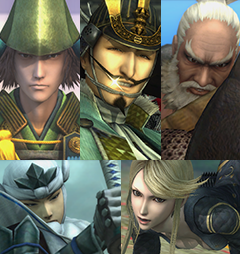 The game is now in 10th position in the magazine's ranking of upcoming games. Pictures from the Sengoku Basara 4 opening movie took up a quarter of the space, with individual shots of Masamune, Shikanosuke, Mitsunari, Maria, Sakon and Yoshiteru. Yukimura is shown clashing with Naotora and Nagamasa cradles Oichi in his arms. It looks as though it's going to be another great opening.

A brief summary of the play books confirms that Naoe Kanetsugu will have some role in the game, since the microscopic text in the picture I am looking at has an option to pick his dialogue boasting about his invincibility as an audio play book. It looks as though the other one is the 'flattery rod' item which has appeared in the series before, and there's a promise that there will be a mixture of old and new options for you to set. You can equip up to three different dialogue books at a time to affect the way that soldiers speak to you mid-game.

We also have confirmations of four new stages. The Mouri army's stronghold, Aki: Itsukushima, is back as usual. The giant mirror mechanic is back as well, though it looks more complicated as the enemy soldiers can change the direction of the mirror to scorch outsiders with light. Yoshihiro's base is confirmed to be Satsuma: Uchijou ('Inner Castle'), a castle hidden deep in the woods with a gimmick where the enemy can be lured into a big crowd. Yoshiaki has a different camp this time in Ushuu: Mogamigawa, where a large number of 'mustachioed gentlemen' can burst onto the scene to make it hard to find the real guy (hey, this sounds familiar...). The stage also contains a large statue of the man himself. Last but not least is Kawanakajima: Uesugi Battle Lines, a version of Kawanakajima bathed in fog where the Uesugi troops will encircle the player. The magazine teases Kenshin as the boss of that stage (of course) but doesn't technically confirm those details.

The description confirms that there will be more than 40 stages in Sengoku Basara 4. I have 31 named stages on my list so far so I'm looking forward to seeing more. The magazine also notes that the stage bosses will change according to the route you pick as you progress through the game - I have a feeling that this means I'm going to have to redo my list at some point to add all of the variant types of each stage so that the different bosses can be seen...

With last week's Sengoku Basara Magazine confirming that there would be 32 playable characters out of a total roster of 40 warriors, we should be expecting another four playable characters before the end of this month. Unfortunately, there are actually five characters still unaccounted for from the Sengoku Basara 3 Utage cast: Sourin, Muneshige, Kotarou, Hisahide and Ujimasa. Two of those have already been shown in official footage, one has been hinted at and the other two are still unknown, yet unlikely to be missing entirely.

I can't help but feel it's unlikely that of the six non-playable 'unfinished' characters, it would be Ujimasa that Capcom would spend the time completing first. If he's involved it's almost guaranteed he'll be unplayable, which effectively proves that the rest will be playable. The only question that remains, in my mind, is whether they'll announce all five next fortnight and have Ujimasa take Mitsuhide's place as a non-playable character (since Mitsuhide and Tenkai shouldn't really be taking up separate slots in the list in the first place). Or will they drag the confusion on into January and only reveal four of the five next time..?

I've updated my translation guide as well to include the new stages and other details.

The official Sengoku Basara 4 website should update overnight to add the five newcomers to the character roster, and then in the morning we should see some high resolution pictures courtesy of the gaming press.

After that, I'm planning to enjoy a few relatively peaceful days until Sunday, when the Tokyo in-store event will take place and flood Twitter with more rumours!

Update 05/12/2013: The official website has now updated and confirmed that we'll get the character pages for the five newcomers next week. Even more interestingly, there's going to be a series of five fortnightly Nico Nico broadcasts beginning at 22:00 (Japan time) on 12th December which will highlight the game with live demos and guest appearances. The show will be presented by comedian Kanada Satoshi of Hannya, and he'll be assisted by DJ/model Nakada Kurumi. One lucky viewer will have a chance to win a replica golden skull tea bowl created by artisan Maruoka Kazumichi especially for Sengoku Basara 4.

The first broadcast (12th December 2013 22:00-23:00) will have appearances from series director Yamamoto Makoto and seiyuu Seki Tomokazu (Ishida Mitsunari). The second broadcast (26th December 2013 22:00-23:00) will feature Kobayashi 'KobaP' Hiroyuki and seiyuu Okiayu Ryoutarou (Toyotomi Hideyoshi). Guests for the subsequent episodes have yet to be announced, but the broadcasts will take place at the same time on 9th January 2014, 23rd January 2014 and 6th February 2014.

If you are a Nico Nico premium user you can visit the broadcast page now and book a timeshift to ensure you don't miss the first episode. Regular users can watch too!