After being teased all day by reading tantalising reports from the people who managed to watch it live, I've now got home and had a chance to view the first Nico Nico Live broadcast for myself.

Unfortunately I can't help with a link to a recording of the full show as I don't know of any and have few connections who could help, but one person has been determinedly uploading the Takeda stage segment even though it was taken down earlier. This link may not last long.

Edit: Shirokitsune has since found a recording of the Ootomo Xavi Land outbreak scene.

I'll try to compensate for the lack of video recordings with a few low resolution pictures.

Disclaimer: I just got home from my workplace's annual Christmas party, so I'm exhausted. Even though there's a high risk of typos and strange grammar, I couldn't resist watching the show before bed.

I thought the show was planned to run for an hour, but the recording is actually more than an hour and a half in length! There were 36,584 viewers reported in the live stream's stats; a very respectful number for the first episode in the series. The two presenters did an excellent job even though both of them were unfamiliar with Sengoku Basara 4. Kanada Satoshi was convincingly interested in the historical subject matter while his co-host Nakada Kurumi had played the first two games in the series.

KobaP appeared briefly in a video message at the start of the show to greet the audience and show off the bizarre Sengoku Basara 4 golden skull tea bowl that Maruoka Kazumichi had created especially as a prize for viewers to try to win. 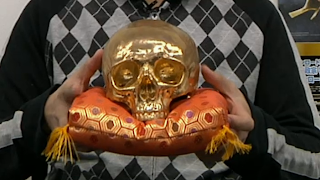 It was confirmed to be hollow so the winner can probably try to live out all of their fantasies of being Oda Nobunaga and drinking tea (or sake) from it in an intimidating way. 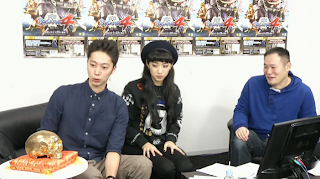 It was then time to introduce the first staff guest, series director Yamamoto Makoto. After a great deal of chat about the skull, the topic moved on to introducing the game series with a batch of familiar trailers. Both hosts seemed to get most excited whenever Shikanosuke appeared in the videos.

Seiyuu guest Seki Tomokazu (Ishida Mitsunari) soon joined the others in a fetching powder pink 'UMA' hoodie. He performed a few lines in character, effortlessly switching between his usual affable manner of speaking and Mitsunari's harsh dialogue in an instant.

It was then time for the live gameplay demonstrations. YamamotoD proudly loaded up the final version of the game, which seems to have the same gameplay modes listed on the menu screen as seen in the recent Sengoku Creation mode video. The characters on the selection screen were also the same: Ieyasu, Mitsunari, Sakon, Masamune, Katsuie, Naotora, Yukimura, Keiji and Hideyoshi. It looks as though these will be the starting characters and the rest will require unlocking.

After picking Mitsunari with Gyoubu as his battle comrade, there were some snippets of what other characters in the story were up to as well as short dialogues between Mitsunari's allies. The glimpses of the character interactions were one of the most interesting parts of the entire show for many viewers: Mitsunari hates Ieyasu for 'betraying' the Toyotomi this time, Sakon follows along and curses Ieyasu too, and Gyoubu tries to calm the two of them. Hanbee has a great deal of influence over Mitsunari, of course. And then, there's a shot of Ootomo Xavi Land... 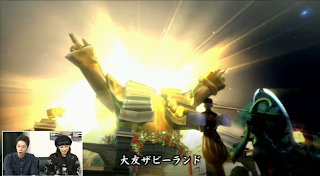 An enthralled Sunday Mouri dances and chants with Sourin as the two of them are bathed in a beautiful light. It's fan service at its best. Both Sunday and Sourin will be bosses on the 'outbreak' version of this stage. 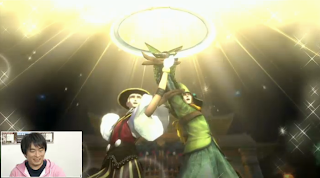 Another scene showed the Maeda family together at their festival. The jarring cuts between Mitsunari's frantic dashing and the ridiculous scenes showing the other characters launching their 'outbreak' stages kept causing the guests to burst out laughing. Even though it wasn't in the list of options in Sengoku Creation mode at the time, YamamotoD fiddled mysteriously off camera to get Mitsunari to appear on Ieyasu's Mikawa: Komaki-Nagakute level instead in order to have the two rivals clash properly. The stage had a really cool setup where you beat Ieyasu at the outset and Tadakatsu comes to rescue him - then overloads and crashes out of the sky. You have to stop the soldiers supporting Tadakatsu with the huge crates they wheel through the stage by capturing cannons and destroying them. None of these details are new to people who have been keenly following the news, but seeing them all play out in sequence suddenly makes a lot more sense.

Sadly, YamamotoD failed to survive for long enough to see much more than that and they had to try the stage a second time. The two guests then left the area and 'YamaD' appeared elsewhere with two people I don't know (a newbie seiyuu and a familiar-looking outgoing guy who kept proudly talking about Brazil). They played in Free Battle mode and tried out some challenges. By the way, the swirl icon we keep seeing for Sakon and Katsuie's elements must represent wind since Ieyasu was clearly shown on the character select screen with a completely different sun-like icon to represent his light element.

The first stage was Kaga Border: Shizugatake with the enemy boss being all three Maeda clan members. The stage includes a race against time to take the bases before Toshiie and Matsu get to them; it made me think of a blend of all of the earlier Maeda stage designs at once. The players didn't do very well.

Keiji showed more character depth in the handful of lines in the demo than in the majority of his story arcs in Sengoku Basara 3. Since the team played as Katsuie with Nobunaga as his battle comrade, it provided an opportunity to reveal Nobunaga's Basara-e artwork and two-character Giga Basara title: Six Demons. 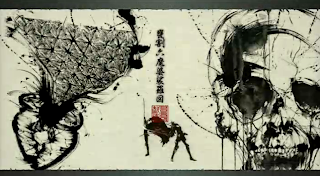 The skull looks creepy with all of that ink dripping from it...

Next, YamaD's team tried a run-through of the familiar Kai: Tsutsujigasaki Yakata stage from the TGS 2013 demo, this time with the difficulty set properly since it's the full version of the game (the early demo was deliberately tuned to be easy for beginners to play). They chose Sakon and showed the scene we've seen in a few screenshots where he stands on Yukimura's spears and swipes his six coins. The staffers read out which characters the live viewers on Nico Nico Douga were calling out for as the gameplay continued. The players did a much better job of achieving their goals the second time around.

There was a prize draw to win a signed Sengoku Basara 4 poster next, which required viewers to comment on the video with a special keyword: Yamamoto. The video comments were full of people screaming his name for several minutes. YamamotoD then returned to the seating area with Kanada and Nakada to run through the latest news about the game's release, and that was the end of the show.

The second episode in this series of live broadcasts will be broadcast in two weeks on Thursday 26th December 2013, again at 22:00 Japan time with Kobayashi 'KobaP' Hiroyuki and seiyuu Okiayu Ryoutarou (Toyotomi Hideyoshi) as the guests. Before then the series is getting more live coverage via the Hagi-Toko show on Saturday and Monday, and there's a a closed demonstration event this weekend. I'll have to update my translation guide on Saturday as there are a lot of details that have now been confirmed, like the in-game pause menu screen and a number of stage bosses.

There were also a few minor news stories today which I don't have the energy to report on properly:

Six lucky fans can win their very own free pair of Sengoku Basara 4 boxer shorts. You need to join My Capcom (instructions are in a previous post somewhere on this blog) and fill in a simple form. You do need a Japanese address for them to ship the pants to, so it might not be worthwhile for most people. Still, free Sasuke underwear is always worth mentioning! The pants will be available separately for purchase at the end of the year, as announced at Tokyo Game Show 2013.

Mobile game Sengoku Basara Card Heroes Matsuri hasn't been forgotten with all of the hype around the newer console title. A special in-game 'Demon King of the Fifth Heaven: Infinite Hell' event starts this week with the reward being a 'Demon King of the Fifth Heaven' Oichi card. The traditional Xavi-themed Christmas event will also be taking place in the game starting from 13th December.

Idol performer Furukawa Mirin of DEMPAGUMI.inc will be participating in the live Sengoku Basara 4 play demonstration in next week's special news broadcast as a guest. This broadcast will take place on 19th December 2014 on both Nico Nico Douga and YouTube; please keep an eye on my previous post and/or the calendar at the top of this site to find the latest direct links to the live shows. 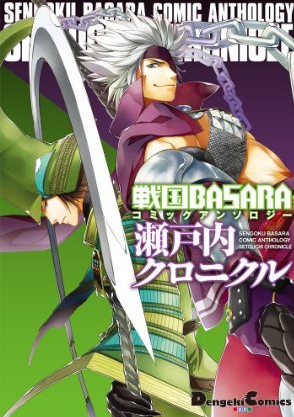 Lastly, a live viewing has been announced for the evening performance of the Sengoku Basara 4 Basara Matsuri 2014 ~Shinshun No Utage~ event on 19th January 2014. It's been very oversubscribed; the tickets all sold out as soon as they were available, leaving many fans quite bitter about being unable to attend. Hopefully this opportunity to get together with friends and watch the show in real time from the comfort of a local TOHO cinema will help ease their frustration. Furthermore, seiyuu Seki Tomokazu (Ishida Mitsunari) has been added to the official list of guests.
at 3:14:00 am