My second post of the day should be a little shorter than the first one as I quickly go through today's live broadcast (with some additional news which I didn't see in time for the earlier report).

Today's live show was a direct followup to the previous one a fortnight ago. If you have a Nico Nico Douga premium account I believe you can still book a viewing at this link; everyone else will have to wait for someone to upload a recording of the full show. Kanada Satoshi and Nakada Kurumi returned as the main presenters again.

The game series' producer KobaP was swiftly introduced to talk the viewers through Sengoku Creation mode accompanied by footage we've seen before. It was then time for today's special guest seiyuu Okiayu Ryoutarou (Toyotomi Hideyoshi) to make his appearance. 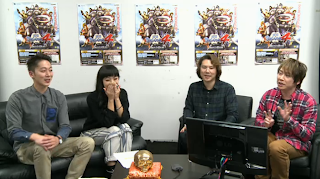 The four of them discussed how big the Toyotomi 'family' had grown and then showed a short new ad "for Okiayu's benefit" with the female characters making sexy noises in the game's onsen stage. I think I speak for everyone viewing the show in saying that the tone of the ad was quite surprising! 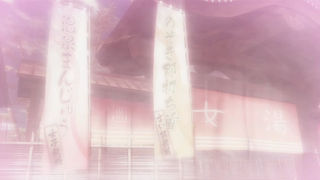 At no point were the characters actually shown. It was just their voices and scenes of steam and banners from around the onsen stage. 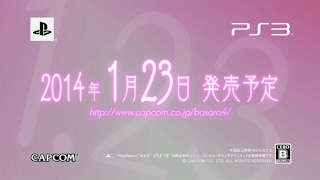 Well, it's good to have equal opportunity fanservice.

In a strange juxtaposition of sexy onsen scenes and ferocious conquerors, Okiayu then spoke some of Hideyoshi's lines live in the studio. 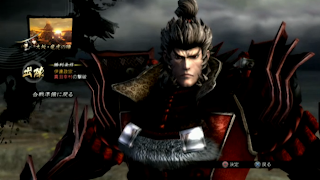 We were then treated to a live gameplay demonstration featuring Hideyoshi (and Hanbee) on the Osaka: Dragon-Tiger Formation stage against Masamune and Yukimura. 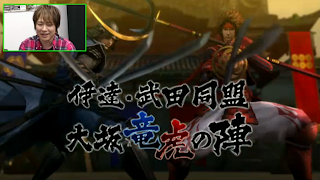 I personally felt that the simple level of gameplay combined with KobaP's instructions and narration made this demonstration exceptionally interesting compared to some other recent efforts. KobaP took great pains to point out various gameplay mechanics such as the three-tier enemy camps and tagging - I've been quite disappointed about the lack of tagging during the recent livestreams and this was addressed today. We also got a reasonably good look at the afterimages of a huge, rampaging Hideyoshi which appeared when Okiayu activated 'extreme style' mode.

KobaP pointed out the way that Hideyoshi's steed turns into his huge warhorse when mounted, which led into Kanada bringing up trivia about the way that the armies used horses during the Sengoku era. I never thought that a young comedian would make such an intelligent presenter; he really did a good job. 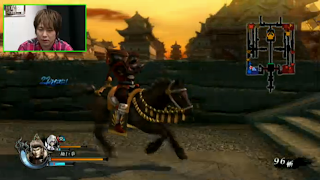 The main fight today was a sub-boss battle against Sasuke, who appeared by emerging from Kojuurou's shadow.

Hanbee's Basara technique seemed even better than it was back in the Sengoku Basara 2 era, with a wider range (I think?) and a great camera angles. Hideyoshi and Sasuke later became locked in a kengeki sword clash and provided one of the most devastatingly manly sights I'm likely to see today.

Once Sasuke had fallen, the demonstration ended and the focus switched back to the studio. Okiayu performed a few more of Hideyoshi's lines, then left as KobaP headed over to the challenge area to join Dogma Kazami and Aoki Shiki (Maou). 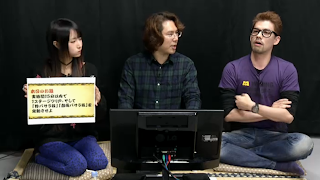 Before starting they discussed one of the two contests they were running. Okiayu had autographed one of the exclusive clear files from the recent Sengoku Basara 4 x Play.Community premium trial session ~Shinagawa Daigassen~ event as a prize for fans who listened out for a special keyword during the show.

It was then time to start the challenge! The team had to clear the Kai: Takeda Grudge Time stage within fifteen minutes using a Basara technique and a Giga Basara. The characters they used were Gotou Matabee and Kuroda Kanbee.

This would be the second time that poor Sasuke was beaten up live on camera today - this time rather brutally at Matabee's hands. They were running quite close to the time limit by the end but they managed to pull off the challenge without any problems. It was thrilling to watch another gameplay demonstration with Matabee even if it was a stage we've seen before. 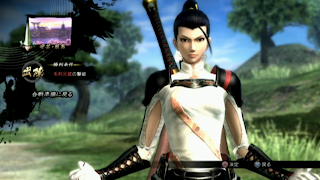 Next came the same trial with Ii Naotora and Saika Magoichi on the Aki: Itsukushima stage against Motonari. 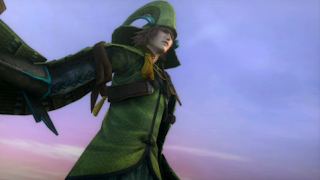 Tsuruhime popped up too and stole the show for many of the commenters, firing herself from her own bow and prancing around. 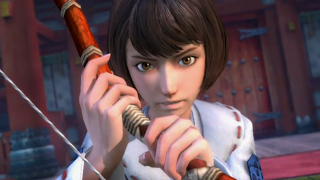 The battle comrade's gauge seems to fill very slowly so tag mode makes it much easier to use Giga Basara techniques - however, the players were struggling right at the end as they hadn't been using Magoichi very much. Right at the end, they managed to perform the move. 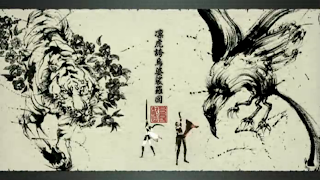 Magoichi's Basara-e illustration turned out to be her signature Yatagarasu three-legged crow with the title 誇烏 ('proud crow'). This was the end of the gameplay demonstration.

To bring the show to a close, KobaP ran through the latest news and showed off today's video (as shown in my previous post). The Lawson news drove all of the commenters wild, much as it has been all morning on other websites. They also showed off the actual nengajou greeting cards that will be sent to recipients to celebrate the New Year. If I lived in Japan, I'd be tempted to send a set to myself...

Update: Someone has uploaded a chunk of the footage to Nico Nico Douga in two parts.
Update 2: There's another part here. As well as the 'sexy' advertisement.

The next episode will be broadcast on Nico Nico Live on 9th January 2014, commencing at 22:00 Japan time as usual. The guests haven't yet been announced other than the two presenters and challenge player Dogma Hazami, so we'll have to wait to see who appears!

Finally, I completely forgot to include this in my enormous news roundup this morning but Sony's Play.Community blog has posted another Sengoku Basara 4 article, this time inviting fans to submit questions for KobaP to answer by 5th January. The questions can be about anything from characters to gameplay. There are also two tiny videos compiled from existing footage.
at 3:55:00 pm