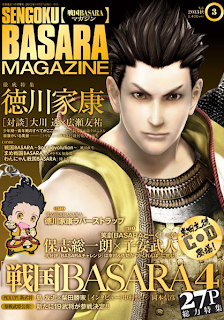 No matter how quickly the postal services work and how much information Japanese fans shared online, waiting for my copy of Sengoku Basara Magazine vol.3 was hard. Released on 27th November 2013 priced at ¥2,400, the magazine is still available through Amazon Japan, Yesasia, CD Japan and Manga Oh at the time I'm writing this post. The two earlier issues are now quite rare (and expensive) so fans who didn't preorder are advised to pick up their copy as soon as possible.

Tokugawa Ieyasu is the cover star this time, featuring on the Mame Sengoku Basara rubber strap freebie and also in a special profile and interview within the magazine. Yet Sengoku Basara 4 fans are perhaps more interested in the magazine's surprise announcement that Mouri Motonari will be appearing in the upcoming game. I've already summarised a large portion of the other gossip from the magazine in an earlier post.

Ieyasu has to share his cover issue with another distraction too since the bonus disc is a talk CD starring Hoshi Souichirou (Sanada Yukimura) and Koyasu Takehito (Sarutobi Sasuke). The pair of them are in fine form and their chatter was full of energy; it made me want the new game even more so I can hear their new frantic mid-battle conversations!

The very first page of Sengoku Basara Magazine vol. 3 includes the picture of Motonari and Sourin in a vast round-up of the latest Sengoku Basara 4 developments. There's a very clear statement next to a picture of the roster (with Mitsuhide and Tenkai shown separately) which confirms that there will be 40 characters in the new game with 32 among them being playable characters. A huge article highlights each character introduced since the previous issue (including Motonari) and incorporates snippets of background information from series director Yamamoto Makoto and producer Kobayashi Hiroyuki.

This section ends with four pages about Sakon and Katsuie (including the very first brief interviews with their voice actors), two pages of general game information, and a very short joint interview with Yamamoto and Kobayashi.
A much longer interview follows with Ookawa Tooru and Hirose Yuusuke, Ieyasu's seiyuu and stage play actor respectively. They both seem like sweet guys who work well together, and with the way they're posed in the photographs Ookawa looks as though he's protecting and guiding the younger actor somehow.

The Ieyasu theme continues across seven full pages of information and flashbacks about his past in the 'Ieyasu Chronicle'. There are pictures, quotes, relationship discussions and creator comments, and a surprising amount of space is devoted to his younger 'Takechiyo' form.
Two stunning tribute illustrations close the Ieyasu Chronicle article. Ayamura Kirihito has drawn Takechiyo and Tadakatsu springing into battle together, while Toh Azuma has chosen to depict the grown-up Ieyasu in front of Tadakatsu and an angry-looking Mitsunari.

There are also summaries of the recent stage events and the historical tour, postcards and drawings submitted by fans, and a few survey results from the previous issue's questionnaire. Please remember that at that time, only thirteen characters had been announced for Sengoku Basara 4 in total.

Funniest scene in the series:

The editor commented that four of the five highest-ranked scenes feature the Takeda army! The games listed were just the first time each scene occurred, so the second one applies to all of the beatings Yukimura and Shingen shared throughout the series.

Which of the currently-revealed new characters are you anticipating most?

I think this question was interpreted differently between the respondents. The editor commented that they could feel everyone's deep love for their favourite characters from the older games.

Aside from the 13 characters revealed already, which warrior do you want to see in Sengoku Basara 4?

A note adds that there were a number of suggestions made for characters who hadn't yet appeared in the series at all. In 12th place was Date Shigezane, and 18th place was a tie between Katou Kiyomasa and Sanada Nobuyuki. The editor wonders what KobaP thinks about these three choices...

The first of the manga this issue is a chapter of Satta Naoto's Sengoku Basara ~Soul Revolution~, introducing Mitsunari as a major threat. The next volume will apparently highlight the final battle, so we might be getting a new manga as a replacement in future. Next comes Sumeragi's adorable Mame Sengoku Basara (Shucchouban) manga with a story about Ieyasu heading to Kaga so that he can study bonds under the Maeda couple. At the same time, he's conflicted about how Keiji must feel now that Hideyoshi has been defeated.

The manga is split up by the two individual columns written by the series' creators. KobaP's Kobayashi HiroyukiP No Kyou Mo Basara Na Hi diary talks about how the decision to build a statue of Date Masamune on horseback for the Tokyo Game Show 2013 came about, and how he thought fans would enjoy getting to take pictures with it - he was right. KobaP also mentioned that when the statue was moved to Tokushima Awa-Odori airport ready for the Machi Asobi event, travellers who weren't familiar with the series would exclaim "Date Masamune? What the heck is he doing here?!" and question whether they'd arrived at the correct airport (the city of Sendai, quite some distance away, would be the natural assumption if you saw an ostentatious statue of Date Masamune right in the middle of the hall).

Series director Yamamoto Makoto was responsible for the second column about developing the characters. This time, he gave an interview about the design decisions which were made when they first came up with Sengoku Basara's version of Mouri Motonari. It's a very lighthearted discussion because the series' coldhearted Motonari is so different from most depictions of the actual historical figure that it's funny. A few interesting points:
The third manga is Tane Jugou's comical one-shot Wan-Nyan Sengoku Basara which reimagines the characters as cats and dogs. The main story stars Ieyasu (dog) and his magical kennel Tadakatsu. The other characters shown are Masamune (cat), Kojuurou (dog), Mitsunari (cat), Gyoubu (cat), Yukimura (dog), Sasuke (cat) and Shingen (dog). A selection of 4-panel joke strips follow the story to depict many more characters from the series in their cute feline/canine forms.

Then there are some sample 4-panel gag strips from the upcoming Sengoku Basara Comic Anthology 'Setouchi Chronicle' manga. The strips are drawn by Hakyu Shou and titled Setouchi Ni Sumu Oni To Nichirin No Ko ('The Demon And The Child Of The Sun Who Inhabit The Setouchi Region'). I'll review this separately when I have my copy of the final book since it's difficult to talk about 4-koma strips without ruining the jokes.

The manga section finishes with a full page advertisement for Yoshiharu Motoki's new Sengoku Basara 4 manga, and a note about the Sengoku Basara 4: Bontenmaru-hen story which will start in the winter issue of the magazine. The summary is simply "Back in a time when Date Masamune was known as 'Bontenmaru', an encounter with Katakura Kojuurou changes Masamune!?". A few more ads follow, and then the final page of the magazine contains the details for the next reader survey. As usual, you have to pick which features you liked most and provide feedback, as well as answering some miscellaneous questions about which pair of characters is your favourite, which scenes moved you the most, whether you like the stage plays and so on. It also asks whether you want the one-shot Wan-Nyan Sengoku Basara manga to continue - I hope a lot of people vote for this! There's a chance to win various trinkets if you submit your survey card before 10th January 2014.

That's all for this issue of Sengoku Basara Magazine. The next one will arrive after Sengoku Basara 4 has been released, so who knows what kind of information it will contain..?
at 1:39:00 am