News roundup: Catching up on the new Sanada Yukimura-den information (including preorder details)

Where do I start? I'll never forgive KobaP for releasing so much information during my business trip; he's had months to do this! Please forgive me for all of the comments I haven't responded to; I've been reading and enjoying them and can't wait to have some free time to write replies.

My previous post has been updated with the last few details from Thursday's big gameplay news reveal and it's probably best to read through that first if you haven't already, otherwise some of these gameplay details won't make much sense.

The preorder listings are now live and there are a few different versions, though thankfully not as many as there have been for previous games. All boxed editions of the game come with two bonuses so long as you place your order early enough. 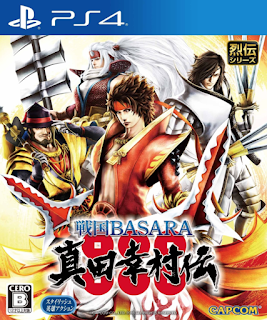 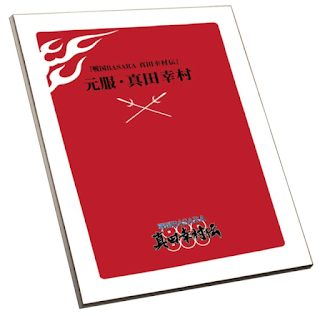 While the second is a DLC 'White Cross Ver.' costume code for Yukimura. 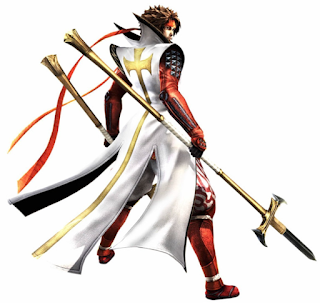 These bonuses are only available while stocks last.

If you purchase the digital edition of the game from PSN early enough, you'll receive the 'White Cross' outfit but not the book. Full details of the PlayStation store preorder schedule will be available at a later date.

The special edition of the game is exclusive to Capcom's Japan-only online store e-Capcom (PS3, PS4). It comes with all of the limited quantity bonuses as well as an additional limited quantity 'Yukimura-kun Ver.' mascot costume for Benmaru. 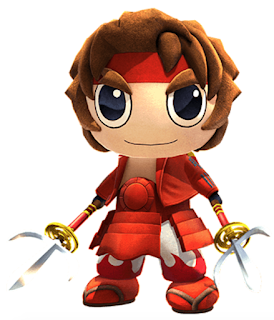 The main feature of the special edition is a pair of exclusive statues from Sentinel. Benmaru is 130mm tall while Bontenmaru is 135mm, and they were modelled by artist Nagashio Kyou. You can see an article about the creation of the figures here. Only a limited quantity of the figures will ever be produced. 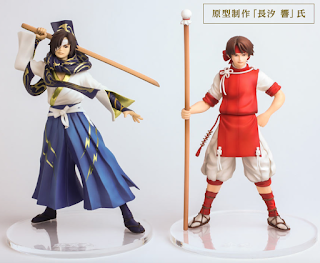 Play-Asia are making it easy for fans outside Japan who don't want to deal with ordering through a deputy service. If you want them to buy the special edition on your behalf, they have listings for the PS3 and PS4 special editions available. They also offer a prepaid import tax delivery service with Fedex, though it isn't cheap!

You can buy a standard edition from e-Capcom too which includes the Yukimura-kun costume without the statues. I wouldn't recommend this option unless you live in Japan; the DLC costume has been confirmed to be available later from PSN and some (as yet unannounced) other game stores anyway, so the cost of buying through e-Capcom makes it a bad deal unless you want something truly exclusive like the edition with the exclusive figures.

Amazon Japan (PS3, PS4) has a Masamune-kun costume for Bontenmaru, to match the Yukimura-kun version on offer elsewhere. Please be careful if you want to order from Amazon Japan. There are two sets of listings; one set includes the Masamune-kun costume and the other doesn't. This outfit will also be available separately as paid DLC later on. 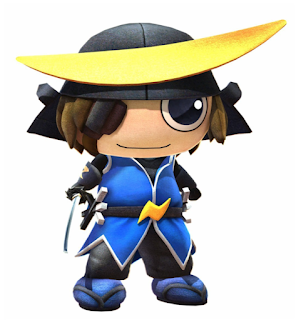 While rival GEO has a 'blue skies' book cover instead:

These store-exclusive bonuses will only be offered while stocks last.

Import-friendly stores listing the game for preorder without any exclusive bonuses include the following:

All of these stores should include the standard limited quantity bonus items (novel and 'White Cross' costume) so long as you order in time. Anyone who preorders before the game's release date should be confident that they'll receive the bonuses.

As for the bonus costumes, the Yukimura-kun and Masamune-kun costumes will be available later from PSN as paid DLC. The 'White Cross' outfit for Yukimura will not be available later, so no matter where you choose to buy the game it's a good idea to preorder if you want all of the costumes.

I'm not sure about the status of the Chinese edition, which is also scheduled for the summer. Will there still be a Japanese-language 'Asian edition'?

The new video went live on Thursday, giving us clips from some of the story scenes and footage of Ujimasa, Kotarou, Hideyoshi, Hanbee, Matabee, Ieyasu, Mitsunari, Nobunaga, Mitsuhide, Katsuie, Toshiie and Kojuurou.


An alternate version of the video with T.M.Revolution's theme song playing in the background can be watched on the official website. It takes ages to buffer.

A few observations:
I'm not entirely serious with my consternation over the character choices (though I am serious about missing Matsu). The series has been dropping in popularity precipitously over the last couple of years with fierce competition from Touken Ranbu and other titles which have been successful with the same demographic.

They need to appeal to the devotees who invest in the merchandise and simultaneously attract new fans with solid, intense gameplay, which seems to be exactly what they're trying to do with this game in order to keep interest in the series flowing while they work on the next numbered title. It's important that Yukimura-den does well for the sake of future titles in the Retsuden Series, of course, but I think it's also critical that it keeps the core fans interested for the sake of the series overall. They will also be courting local tourism boards to try to cross-promote with the real-life versions of some of these characters. I can forgive a little pandering if that's what it takes for the series to be a success.

(Sengoku Basara 5 had better be awesome, though.)

The broadcast took place on Thursday evening as scheduled, with Saaya joining KobaP, producer Nonaka and guest Shima. Nonaka didn't speak up much, but the main takeaway from this first broadcast is that the gameplay looks fantastic and I really want to pick it up and start playing. I placed my preorder while writing the first part of this post on Thursday night because watching the footage got me so pumped up! 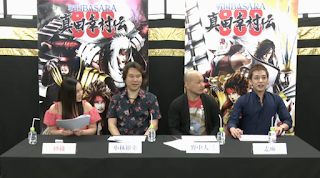 I mentioned in my previous post that the usual kill counter tracks monsen coins rather than K.O.s in this game, and it seems that wasn't quite right. The live stream clearly showed that the monsen counter is something different. The game still tracks K.O.s with pop-up notifications when you get to certain numbers, but the monsen coins are separate to this and seem to be a straightforward currency. You acquire the coins by killing enemies with blue health bars and also from in-game challenges. There doesn't appear to be a persistent on-screen counter for K.O.s alone.

The video was very helpful for showing how the new Bushin ('Braveheart') system from the previous magazine update worked in action. When you're able to activate Bushin Denshin mode ('Braveheart Telepathy') to turn all of the enemy HP gauges blue, you'll see this notification indicating that you can use it:

And the L1+R1 buttons will show up in the bottom left like this. The blue ring around the number kanji indicates the time remaining in Bushin Denshin mode and when it's active it's very obvious, with a blue aura around the screen and sparkling special effects.

I tried making a list of all of the Bushin system bonuses we have seen so far, including from screenshots published in Weekly Famitsu and other sources. It's not clear whether these bonuses are stage-specific, character-specific or randomly assigned, so this list shouldn't be treated as solid information just yet - I simply recorded everything that might be relevant.


Please also note that it's very hard to read the blurred text in some of the screenshots so while I've done my best to provide an accurate transcription, there might be errors.

The video offered an opportunity to see the tegata mission panel in the top right corner in action. Stages seem to have story missions like 'go for the dragon's lone cedar tree', 'head towards Takeda Katsuyori', 'beat Oda Nobunaga and Akechi Mitsuhide' or 'beat Tokugawa Ieyasu', but there are also more general objective-based missions like 'defeat 200 soldiers' which appear during gameplay.

At one point, the mission panel changed to display a 'rainbow chance' with a huge bonus reward. In this case it asked the player to pull off a 500-hit combo within the time limit shown below the box. If successful, they'd be awarded 5,000 monsen coins. 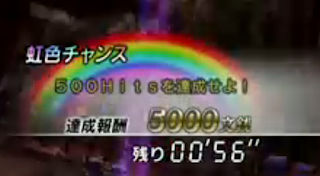 It seemed to enclose the player in a small zone while the challenge was active. The mission was a success and a pop-up message appeared advising that it was the first of three 'rainbow chance' opportunities so perhaps these come up at specific points in each stage?

Another pop-up which appears during the play is a 'six circle challenge'. There seem to be six of these representing the six coins on Yukimura's rokumonsen emblem, though it's very possible there are twelve (one for each side of the coins). The first one shown in the video was simply to defeat 500 enemies while another asked the player to defeat ten enemies using a single Basara move. 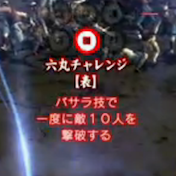 One more mystery came in the form of the boss characters' health gauges, which had extra bars above them (two for Nobunaga and Ieyasu, one for Mitsuhide). It's unclear what significance these marks have as the confrontation with Ieyasu ended when the main bar was empty.

Other miscellaneous things I recall from the broadcast:
Edit: And while it's not my observation, fan OneSanitarium noticed that the layouts of the stages shown so far have shared some very distinct similarities with stages from Sengoku Basara 3 and Sengoku Basara 3 Utage!

The next live broadcast is scheduled for 23rd June 2016 at 20:00 Japan time. I'll follow up with the stream link once that's been confirmed.

The Sweets Paradise collaboration moves into its second phase

The first phase of the Sengoku Basara: Sanada Yukimura-den x Sweets Paradise Sanada Cafe tie-in came to a close on Thursday, and consequently the stickers and coasters on offer to visitors have changed to a new selection. 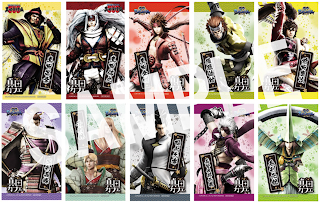 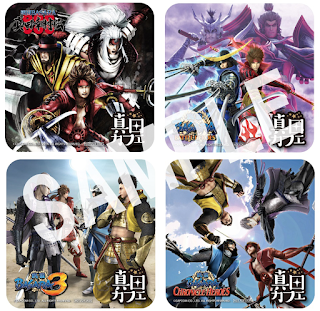 I think we can safely expect the next major update about the game in mid-June given the date of the next broadcast and the fact that the third (and final) update to the cafe's rewards is scheduled for 9th June 2016, with the event closing its doors on 26th June 2016. The second phase of the Sweets Paradise came on the same day the new video was released, and the cafe immediately started playing the new video to its customers when its doors opened that morning.

Is it unreasonable for me to hope for a Sasuke announcement and new video on 9th June, followed by further information during the live stream a couple of weeks later?

A new illustration of Benmaru and Bontenmaru is available through LINE

Fans who follow the official Sengoku Basara LINE account will have received a notification this week with a commemorative picture of the two youngsters playing together with traditional Tango No Sekku accessories. I'm only including a small screenshot; please follow the LINE account if you'd like the full quality version. 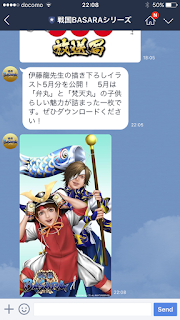 The service will also respond with a new picture of the game's box art for fans who send the words for 'release date' (発売日) to the official account.

Results from the fourth Basa-ranking survey

The fourth set of Basa-ranking results have now been published to list the games with the best background music according to the fans who voted.

Some stores are listing a cheaper 'best price' version of Sumeragi for release on 7th July 2016, so fans who haven't picked it up yet can save quite a lot of money if they wait just a little bit longer. Since Yukimura-den focuses on the Yukimura storyline, people who like what they see might be encouraged to try a more fully-featured game with the full set of characters. I hope it does well.
at 8:24:00 pm