There's a lot of news this time, so this is a rather long post.

Today was the first performance of the new Butai Sengoku Basara 3: Togakuruwashi Kizuna stage play! With a massive 22-member cast which brings back popular characters like the Maeda family and Kingo, the focus is on the tragic relationship between Ieyasu and Mitsunari, taking the Butai Sengoku Basara 3 series right back to its roots.

The press were invited to the dress rehearsal and there are already photo reports online on the Dengeki, Famitsu and 4Gamer websites. KobaP is reported to have said that he wants to give Tokugawa Ieyasu a 'push' in 2014 with this and the new anime project on the horizon.

There were also a number of the cheerful tweets from celebrities who attended the first day's performance. My favourites were the 'two shot' pictures of seiyuu next to their stage play counterparts: here's Ishino Ryuuzou and Nakahara Shigeru having some fun with the actors. Nakamura Seijirou (Mitsunari) broke the trend by posting a picture with Okiayu Ryoutarou (Hideyoshi) instead of Seki Tomokazu (Mitsunari).

I hope that the play is a big success, and that we can look forward to a possible Butai Sengoku Basara 4 before too much longer.

Edit: Gamer and Inside Games have added their picture reports as well.

More details about the new stage play goods are revealed

Sample pictures of the new merchandise available at the play's venues are now available. A few items were already shown in a previous update; here's the rest. 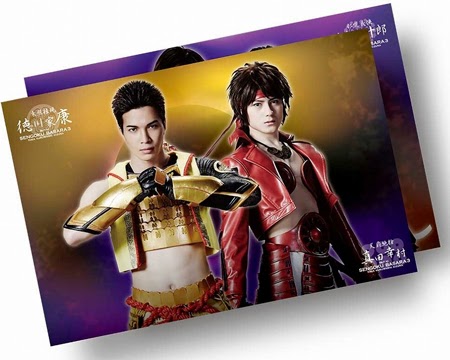 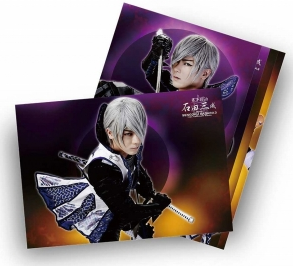 Four clear files available in Ieyasu/Mitsunari, Masamune/Yukimura, Keiji/Kojuurou/Sasuke and Motochika/Motonari designs (¥600 each). Yoshioka Yuu will be the actor dressed as Yukimura for the clear file. 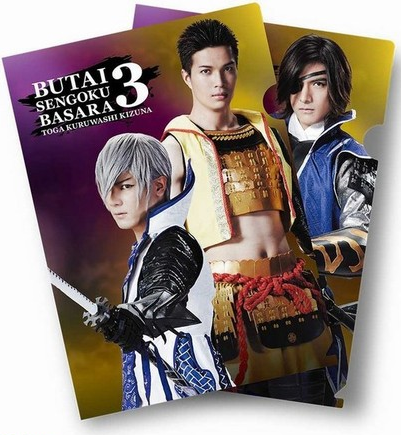 A 32-page A4 pamphlet (¥2,100). It's been reported that there was a printing problem with the pamphlet which has led to a delay; it won't be available until 28th April 2014. Fans who attend the earlier performances are able to preorder the pamphlet at the venue and have a copy posted to them once it's ready. 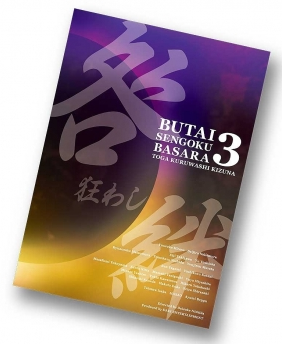 A quiet announcement on the official website has confirmed that the mobile game Sengoku Basara Card Heroes Matsuri will soon be joining its cousin Browser Sengoku Basara as a distant memory; it's to close down at 14:00 on 23rd June 2014. To soften the blow, a special in-game event will be held from 30th April with Echizen: Kitanoshou Castle as the theme to allow players to get their hands on some rare Sengoku Basara 4 cards. I hope they release all of the exclusive artwork used in the mobile game one day for those of us who didn't have the time to play it properly...

Sengoku Basara Magazine Vol.5 is dated for May

Eagle-eyed fans have spotted a placeholder listing on Amazon which gives the release date for the next volume of Sengoku Basara Magazine as 27th May 2014. Assuming that nothing changes, we should see more preorder listings appearing over the next few days.

Even more Mame Sengoku Basara merchandise is on the way

CafeReo is continuing its relentless attack on the wallets of fans across the world with yet another wave of Mame Sengoku Basara goods due in June and July. This is starting to become much too expensive, but at least these items are available through regular import shops such as Otaku Republic, Ami Ami and Amazon Japan. More international-friendly stores should be adding their preorder listings very soon. 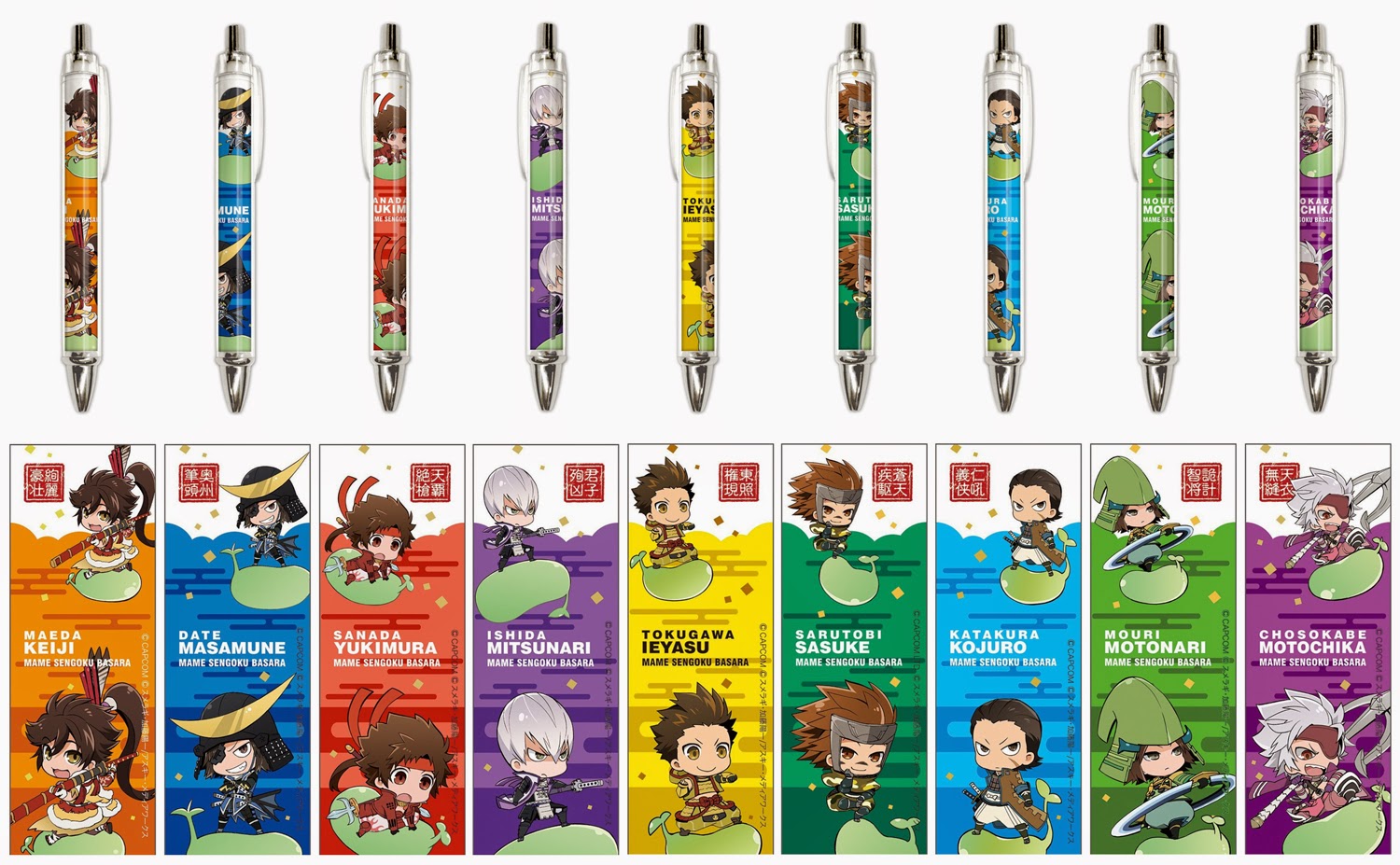 A pair of Mame Sengoku Basara 'decoration jackets' for IC cards (¥500 each). 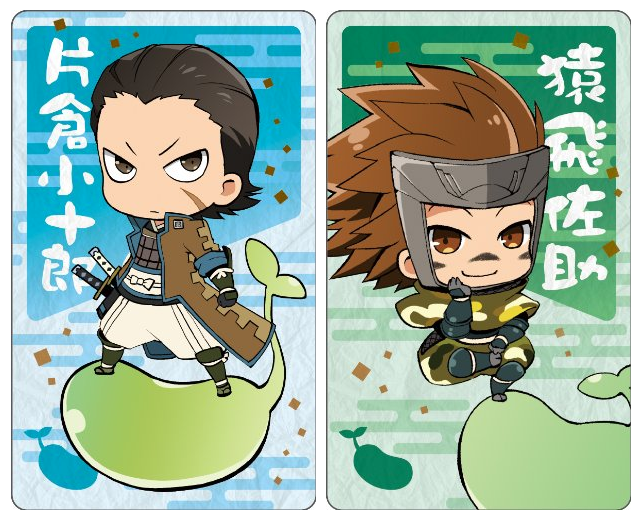 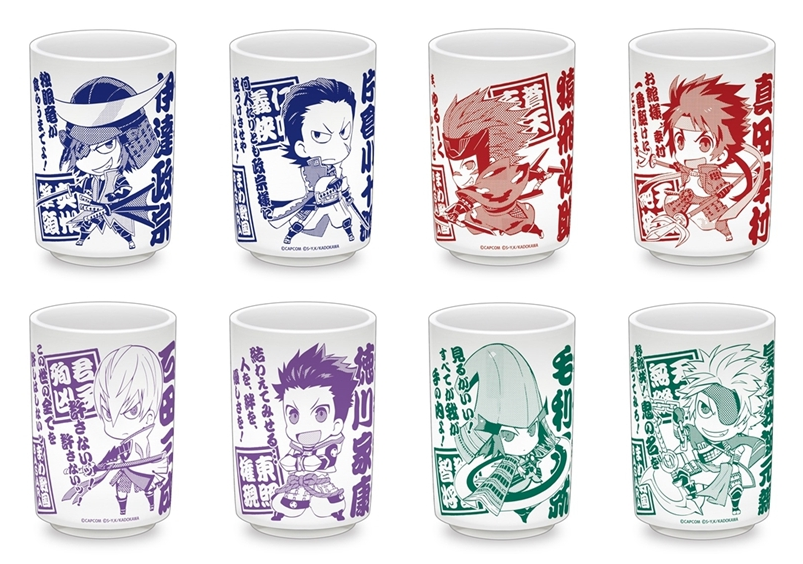 The real-life Sanada Yukimura is famous for his strong ties to the Osaka area (which is not coincidentally also the site of Capcom's headquarters) and a historical exhibition about the real warrior is to be held over the Golden Week holiday period in Japan. The Tennouji Sanada Yukimura Fair is running a 'pre-event' celebration on 4th May 2014 in Tennouji Park, Osaka, and Sengoku Basara fans will have a few extra incentives to visit this time.

It's been confirmed that Sanada Yukimura's seiyuu Hoshi Souichirou will be making two sold-out appearances on stage with KobaP, and eccentric brand Otokomae Tofu will be running another tasty tie-in for fans of the series! The collaboration will be similar to the one at last year's Kyomaf fair, with a ¥300 set of chilled tofu, tsuyu sauce, an egg and seaweed. An exclusive 'manly' sumi-e illustration has been commissioned for the packaging. 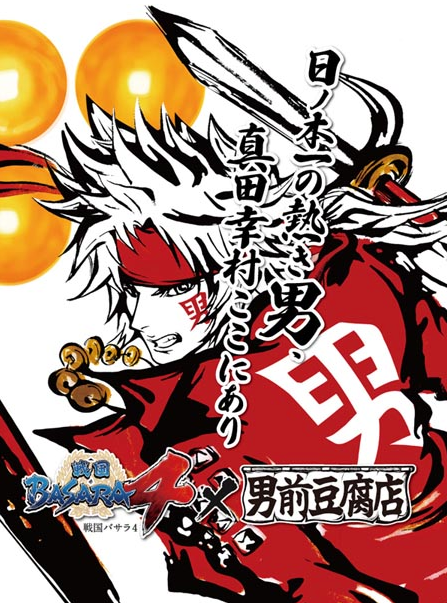 It wasn't so long ago that we were all getting excited about the Sengoku Basara 4 news from a previous Machi Asobi! There's no sign of any exclusive information this time, but fans who are in the Tokushima area might want to visit on 5th May 2014 for a special digital creator seminar starring Tales Of Xillia producer Baba Hideo, Gunslinger Stratos producer Kadoi Nobuki and Sengoku Basara 4 producer Kobayashi Hiroyuki (KobaP). It should be a very interesting discussion for those lucky enough to attend.
at 10:36:00 pm