In the end I dropped Buddy Complex after a few technical issues watching it on Daisuki and a desire for more free time, leaving me with a fairly lean schedule this season - concentrated heavily around Thursdays when almost everything seemed to come out at once.

Crunchyroll and Wakanim were my go-to streaming services with both Daisuki and Animax being too annoying to keep up with. The announcements for the impending Spring 2014 season are still ongoing, so I'm hoping that Crunchyroll manages to get UK rights for the majority of titles I'd like to see. Watching there is a much better experience than on the rival simulcast sites.

Here's my final ranking for the winter titles before I start the wrap-up:

1. Nagi No Asukara
2. Kuroko No Basuke season 2
3. Nobunaga The Fool

Wow, for once my guess at the start of the season was right! 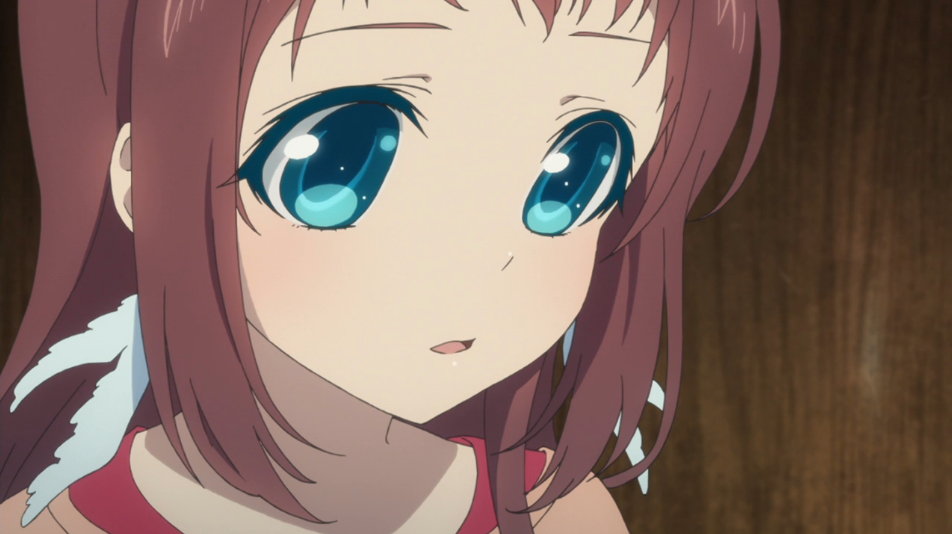 Hoozuki No Reitetsu
One of the rare anime comedies with a setting that I can actually relate to! While the Hell setting is obviously fantasy, this sarcastic comedy show portrays everyday working life in a completely unique way. I don't think it's possible to dislike the spiteful Hoozuki, and the rest of the colourful cast members are also appealing in their ridiculousness. Perhaps I shouldn't be admitting this so affectionately, but Enma Daiou reminds me of my boss in real life.

The real charm of this kind of show is the rich melting pot of cultural references it can incorporate, and Hoozuki No Reitetsu definitely satisfied me there. Demonic lore from all over the world finds its way into the plot, and there will undoubtedly be even more anecdotes for the characters to recount if it continues one day. This is the kind of quirky title I keep watching anime for. 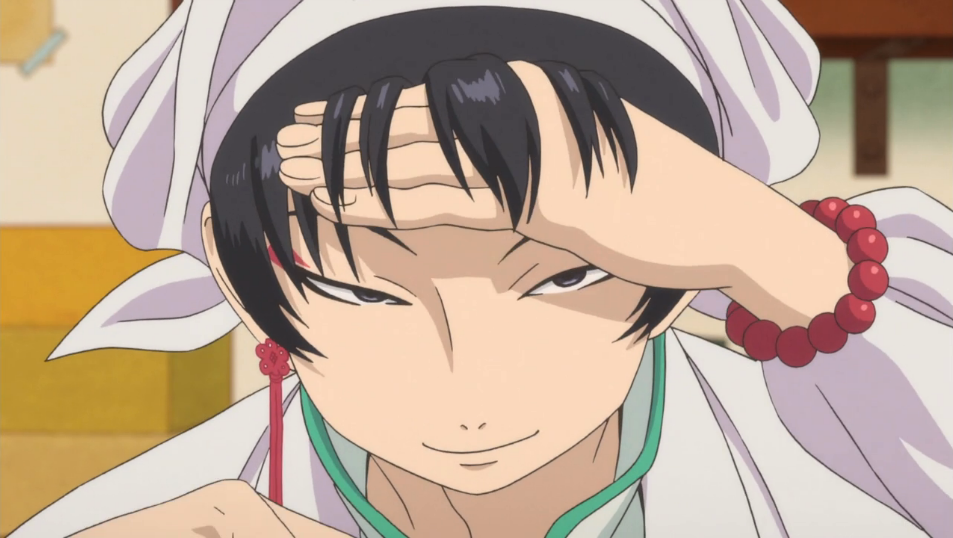 Kill la Kill
I think Kill la Kill suffered from the extreme amount of hype that it was given amongst anime fans. It was a fun watch yet it never quite lived up to my hopes. A large part of that was that the main characters actively annoyed me; how many times did Ryuuko need reminding of what was truly important to her before powering up and winning the fight? She didn't ever feel like an actual character; merely a walking plot device. It's a shame because she had seemed quite cool back at the start of the show with her spunky attitude and appealing design.

I sometimes feel like the only person in the world who openly wants to strangle Mako, too, but at least Satsuki and her gang were fantastic. There were several laugh-out-loud moments - mostly involving Nudist Beach - and the fan service was expertly timed. All in all, I feel that Kill la Kill was a good show, just not a great one; let's see how Studio Trigger will go from here now that they've proven themselves so memorably. 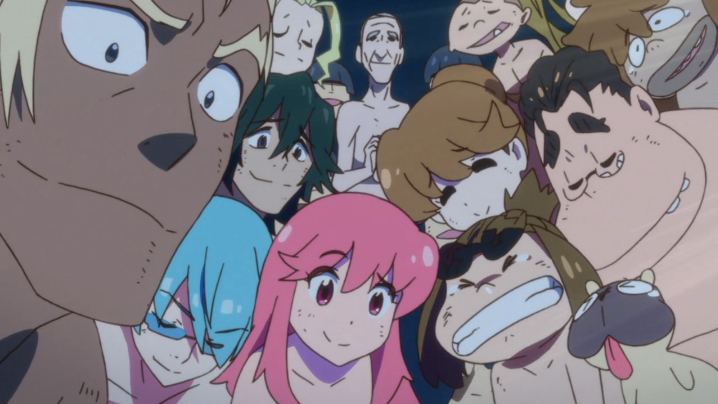 Kuroko's Basketball season 2 (Kuroko No Basuke season 2)
This show is tremendously good. It became better and better over the course of the second season and every match ended in a nerve-racking showdown. I can't decide who I love more; there are way too many amazing characters to count. It's hard to believe that it's over (again) and that my Saturdays will be basketball-free for a while. The inevitable third season will be fantastic with matches against Kise and Akashi looking likely in the near future. Didn't I say that I wanted to find out more about Akashi back when season 1 wrapped up? I'm still waiting!

It would be wonderful if a US company would take a chance on a Blu-ray for Kuroko No Basuke. As long as they managed a reasonably timely release, I don't see why it would do any worse than any of the otome game adaptations which have found an audience over there, and it's so good. I want to add it to my collection! 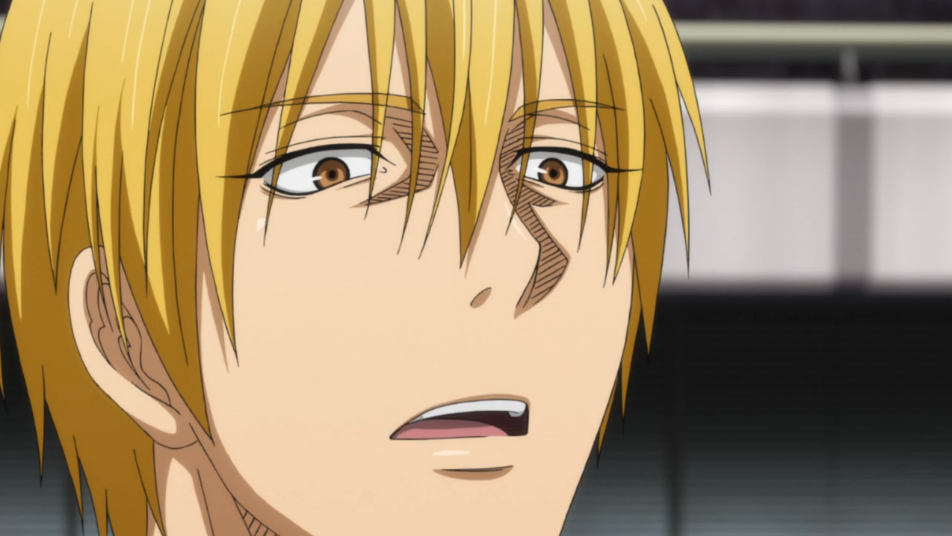 Nagi No Asukara (Nagi-Asu: A Lull in the Sea)
Even though I can't really say why I liked Nagi-Asu so much, I thought it was wonderful. It tells the story of a bunch of indecisive kids stumbling into their first romantic relationships - with elements of religion, multiculturalism, fantasy, tradition and social upheaval to keep the dramatic tension high. The setting is deliberately unrealistic, and doesn't try to explain itself scientifically, but the people are so earnest that I had tears welling up in my eyes on more than one occasion. There's so much humanity in the show; it became a hopeless addiction and I couldn't watch each week's new episode quickly enough. NIS America have licensed the series for a home video release in the US and I'm definitely going to preorder my sets as soon as they're available. 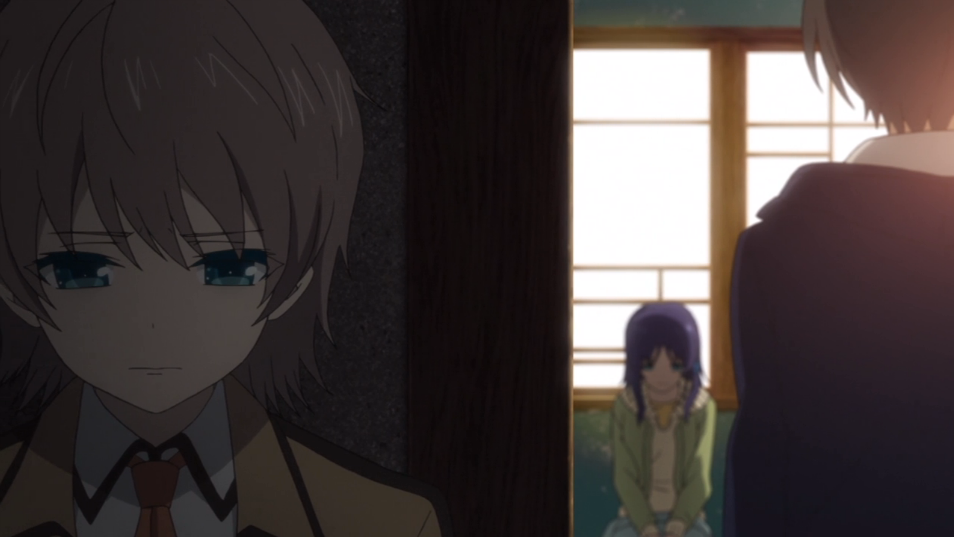 Nobunaga The Fool
I was going to like Nobunaga The Fool even if it was terrible because it was full of attractive, passionate historical figures making bold declarations of war with absurd references to real-life history liberally thrown in. Thankfully, the show turned out to be pretty good too! It tells a serious plot of death and betrayal without letting any of it ruin the mood for too long. Nobunaga The Fool is one of the very few series on my list which will be continuing into the spring, so I'm going to keep watching to see where Nobunaga's wild journey takes him next. 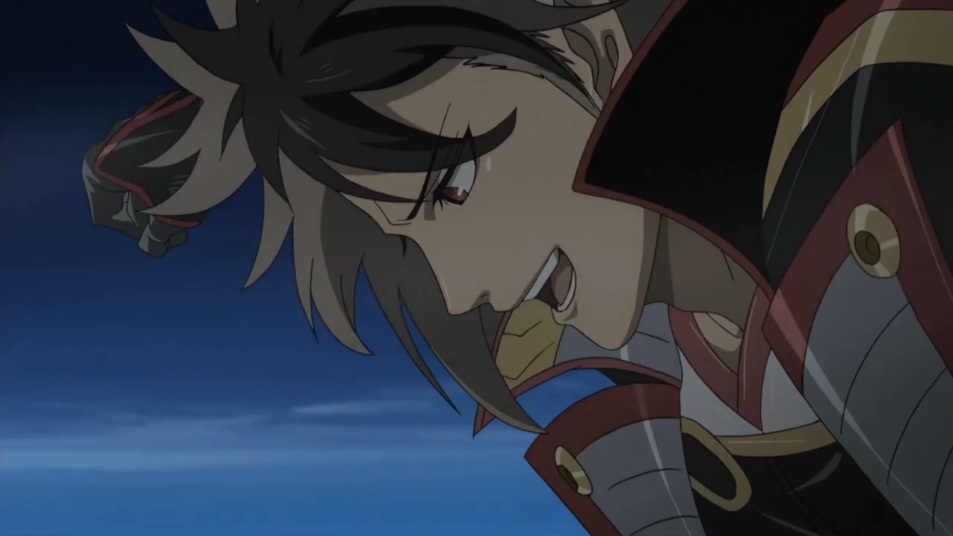 Samurai Flamenco
What a weird ride Samurai Flamenco has been. The tokusatsu influences are certainly interesting, yet I feel the staff could have achieved much more than they did in converting that style of show to an anime format. The classic(?) 90s series Tokumu Sentai Shinesman portrayed the tokusatsu universe much better. Ultimately, though, the real problem with Samurai Flamenco was its characters - I didn't like any of them at all. Even the relentless fujoshi-pandering approach that the series often resorted to couldn't make up for the fact that the huge cast was beset by so many bizarre flaws that it was difficult to become emotionally invested in anyone.

It was certainly interesting; I can honestly say that I didn't see any of the show's twists coming in advance each week. I'll probably pick up a cheap US BD release one day so I can relive the bizarre plot again when I've forgotten what happened. Other than that I'm done with SamuMenco world. 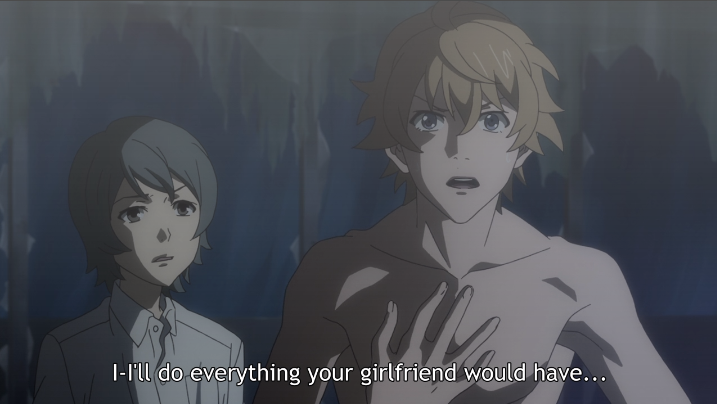 Silver Spoon season 2 (Gin No Saji)
It's sad to see the end of the thoroughly charming Silver Spoon. The plot remained mundane with no superpowers or ridiculous twists to be found, yet the wonderfully human cast made it one of the shows I most looked forward to every single week. It's amazing how likeable all of the teachers, students and animals could be. The second season was a satisfying follow-up to the first, introducing new drama while answering a few of the questions anime-only viewers (like me) had about Hachiken's family background. At the same time, the romantic side of the story gradually developed in a realistic way. The scene in the final episode where Hachiken's former schoolmates are shocked by how much he's changed summed the series' message up perfectly. 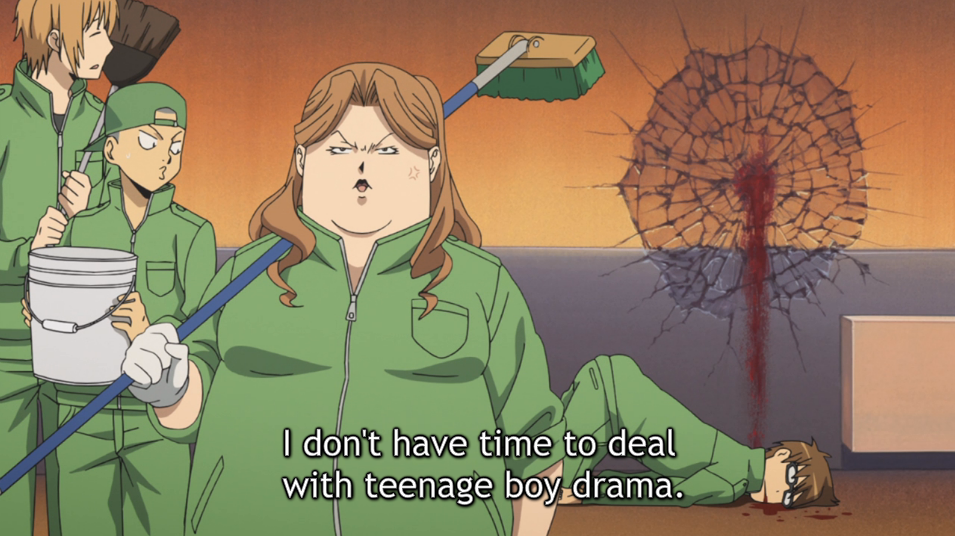 Space Dandy
My feelings about Space Dandy are very jumbled, much like the show itself. It was the most uneven viewing experience that I've had in a long time. The seiyuu cast, artwork, designs and setting are all great, but the decision to give each episode a unique 'feel' by switching between a variety of distinctive creative staff really hurt my enjoyment of the series. There were two episodes in particular which I found thoroughly boring to watch; a cardinal sin in the world of entertainment.

Though I'll watch the second part when it starts airing later this year, I get the feeling that Space Dandy is never going to be a favourite - it's just too inconsistent. A shame since when it's good, it's superb. The race episode was one of the highlights of the entire anime season for me. 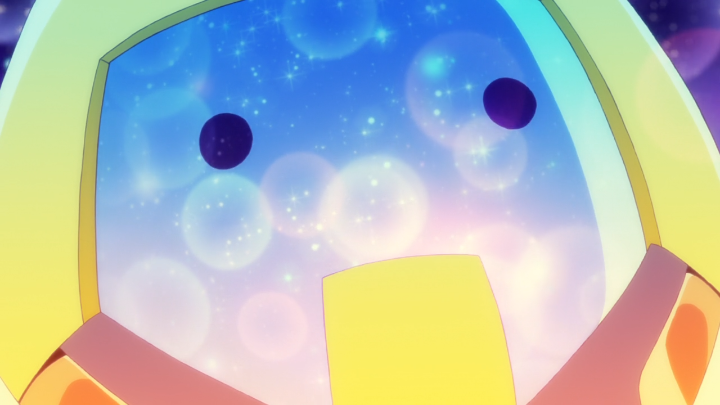 Strange+
I found it impossible to dislike the horrifyingly stupid Strange+. It's right at the opposite end of the comedy spectrum to Hoozuki No Reitetsu - lewd, shallow and incoherent - yet it's just as funny in its own right. I believe that the show is continuing at some point; I'll keep watching the nonsense as long as Crunchyroll keeps streaming it! 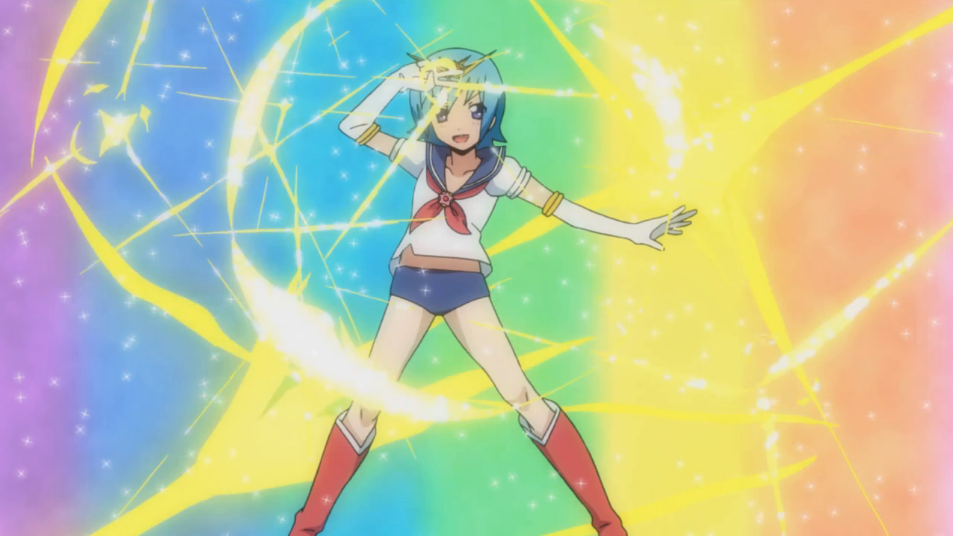 Didn't watch due to corporate politics

Now that the season is over, the list of shows I never got to watch is complete. Thanks to Funimation I was blocked from seeing D-Frag!, Noragami, Maken-Ki! Two and Inari, Konkon, Koi Iroha. From the Crunchyroll lineup I was blocked from Mikakunin de Shinkoukei (Engaged to the Unidentified), Pupa, Sakura Trick, NO-RIN! and Robot Girls Z.

There was also the strange case of Sekai Seifuku: Bouryaku No Zvezda (World Conquest Zvezda Plot) - while this was technically available, I didn't find out until too late because Animax's website sucks. 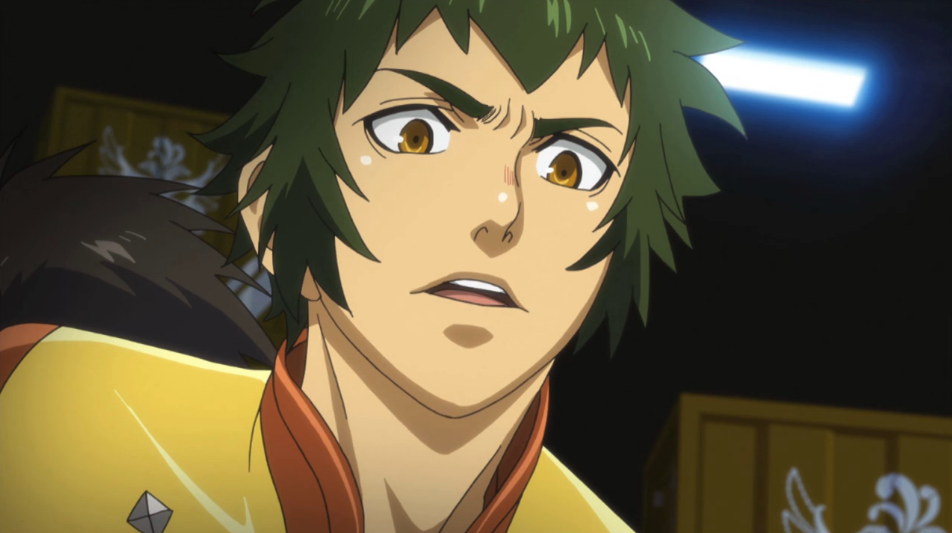 Winter 2014 was an odd season for anime. There weren't many big hits even though several of the shows I managed to watch turned out to be hidden gems. The only continuing show I'm following is Nobunaga The Fool, so next season will mostly be a clean slate with a lot of promise in the form of more JoJo's Bizarre Adventure and Mushi-shi. I'm going to keep dreaming of a day when anime fans the world over are allowed to watch legal simulcasts without arbitrary regional lockouts.
at 10:48:00 am