Members of the press were invited to try out Sengoku Basara: Sanada Yukimura-den

The special in-store demonstration/talk event in the Shibuya LABI branch of Yamada Denki took place yesterday but the media were given a sneak peak a week early, which means we already have some official reports about the content Capcom were subsequently showing to customers at the event. Here's what I noticed from the summaries of KobaP's presentation at the press event.
The demo gameplay all took place on the Tenmokuzan stage (chapter two) which we've seen before. This gave the attendees the opportunity to try Yukimura, Masayuki and Nobuyuki. The 4Gamer report included some helpful screenshots such as the result screen once you clear a chapter which I've gone ahead and translated: 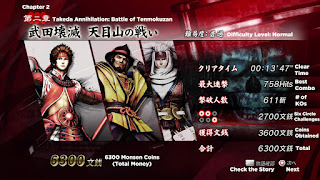 It's possible to view the main story dialogue through this log screen, so even if you get caught up in the combat you can still catch up on what the characters were saying later on. Unfortunately it doesn't look as though there's an option to replay the lines; a feature which is increasingly common in visual novels: 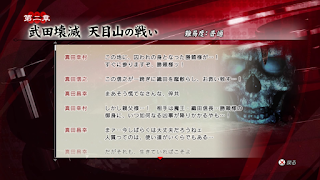 The graphics for the Sword Clash mechanic have been updated to match the rest of the interface changes: 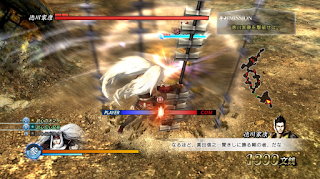 Finally, after the public event the official Sengoku Basara Twitter account posted a picture of one of Benmaru's special weapons from the game called 信州うさぎ ('Shinshuu Rabbit'). Shinshuu is a part of Japan closely tied to the Sanada clan and famous for its delicious apples, and in Japan it's common to see slices of applies carved to resemble cute bunnies to make them appealing to children. Naturally, the spear is shaped like a carved apple slice with its handle a wooden toothpick. While there's no information about how the weapon is obtained, it seems likely that it's either a joke weapon or some kind of bonus item. 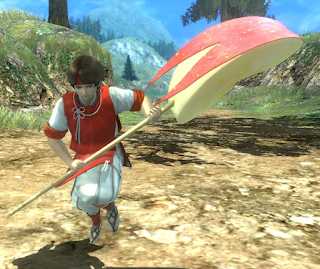 There's also an Ashigaru-kun report from the Famitsu Presents Sengoku Basara: Sanada Yukimura-den Summer Early Access Gathering event a couple of weeks ago. No new information, but there are a few pictures which show the venue and given a good experience of the atmosphere.

A new section has appeared on the official Sengoku Basara: Sanada Yukimura-den website to list the game's planned DLC. The first (and so far, only) DLC reveal was announced this week, and it's the costume the Sengoku Basara team originally designed for wrestler Gotou Hirooki, the 'Daredevil Of Chaos'. Date Masamune will be wearing the 'NJPW Gotou Hirooki Ver.' outfit in Yukimura-den as an optional paid extra available through PSN. 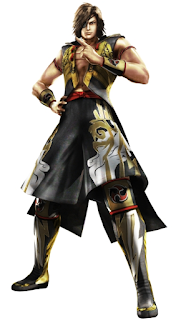 The 'Thunder God' costume originally debuted in the real world a year ago during the first New Japan Pro-Wrestling (NJPW) collaboration for Sengoku Basara 4 Sumeragi, and I was half expecting it to appear as paid DLC for that game back at the time. It's good to see it making it back to the game series since the costume looks pretty cool.

An official Gotou Hirooki x Sengoku Basara t-shirt is also available for ¥3,000 to celebrate the collaboration.

And of course, it wouldn't be a Capcom announcement without a little teasing. Gotou has a new crimson 'Red Thunder God' costume designed by the Sengoku Basara team - how long will it be before this one makes it into one of the games? And who will wear it?

A roundup of the latest promotional videos for the new game

A new Sengoku Basara: Sanada Yukimura-den video was released last week showing Benmaru and Bontenmaru in action. It's officially known as the third gameplay clip for those keeping track, since the Sanada Trials clip has a different title.


In addition, fans who follow the official Twitter account and share the recent gameplay clips highlighting the leads' moves and Basara techniques using the #幸村伝アクション動画 hashtag before 25th July will be entered into a prize draw to win Sengoku Basara merchandise.

Next week offers two chances for live clips from the game, with Capcom TV promising a feature about the game on Wednesday 20th July 2016 and the third hour-long official Sengoku Basara: Sanada Yukimura-den broadcast scheduled for Thursday 21st July 2016. Both shows start at 20:00 Japan time on their respective dates.

Capcom TV is going to highlight the Sanada Trials gameplay demonstration it failed to deliver in the previous episode, while the guests for the Thursday broadcast will be Saaya (host), KobaP (series producer), Yamamoto Makoto (series director) and veteran seiyuu Hoshi Souichirou (Sanada Yukimura). It sounds as though it will be a great episode; we haven't heard from YamamotoD in ages so it will be good to see him standing in for NonakaP!

Capcom promotes historical tourism, in the Wakayama region this time

Another regional tie-in event has been announced, this time in Wakayama to tie in with the flurry of interest in the real Sanada Yukimura this year. The Sengoku Basara x Sengoku Wakayama Stamp Rally will run from 1st August until 2nd October 2016 and offers visitors a few fun activities to keep them occupied. 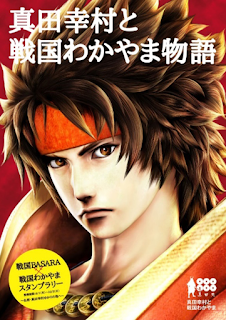 First and foremost is the titular stamp rally, which instruct participants to collect (or print) a pamphlet first so that they can display their progress. They must then travel around various sites in Wakayama to mark their pamphlet with unique stamps which can be found nearby.

When you have collected enough stamps, you can bring your completed stamp sheet to Wakayama Marina City Porto Europe to exchange it for unique Sengoku Basara prizes. The first 1,000 visitors to find all five of the stamps will receive a set of two badges plus a set of three postcards. The first 5,000 participants to find between two and four of the five stamp locations will just receive the postcards. 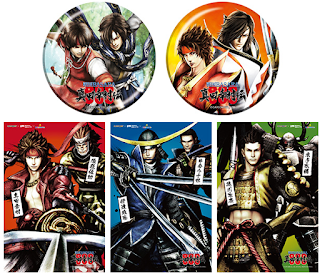 JR West is offering a special Sengoku Basara Wakayama Free Pass ticket for ¥2,400 (concession price ¥1,200) to give people two consecutive days to explore the region on the JR Wakayama and JR Kishigawa lines, and on Wakayama buses. This offer will run for the full duration of the event. 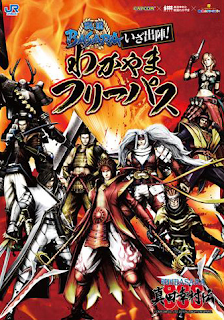 Yutaka Transport is also getting in on the act by having some of its taxicabs decorated with Sengoku Basara livery from 11th July 2016, to accompany the existing Nankai Electric Railway tie-in which is still running until the end of August. Sanada fans will be spoilt for choice! 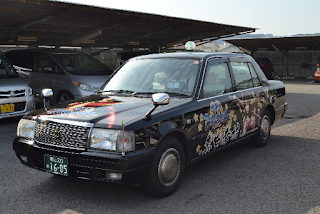 More details will be posted on the official Wakayama tourism website here. After translating the page I realised it was also posted on the Capcom Investor Relations page in English already so there's more information there too.

Meanwhile, Kofu City's successful Sengoku Basara-themed stamp rally is returning between 23rd July and 30th September 2016 and a few more details have been added to the event page. Participants have to scan the QR codes posted at 15 locations around Kofu City in order to collect digital stamps and wallpapers. Three stamps will earn you a KOFU x Sengoku Basara memo pad, eight will award a clear file and twelve stamps is enough to obtain the prize of a lunch tote bag. 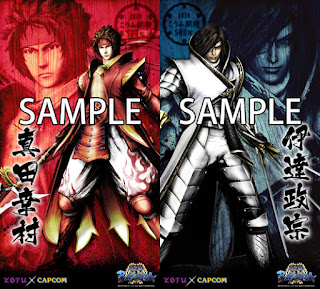 The official brochure can be downloaded from the city's tourism website here, or you can find a physical copy at various local government buildings. Visitors will also be able to use their collected stamps to earn special discounts at various local shops and restaurants.

Remember this mysterious merchandise? Sasuke fans can celebrate as the mysterious final design for the acrylic keychains has been confirmed to include him. Even though I was wrong with my guess from the silhouette in that previous post, it's good to see that he wasn't overlooked! 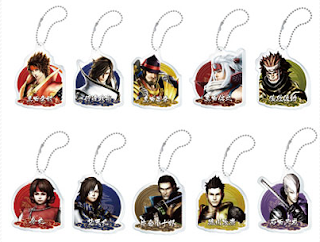 The same is true for the illustration boards; Sasuke has joined the character list. 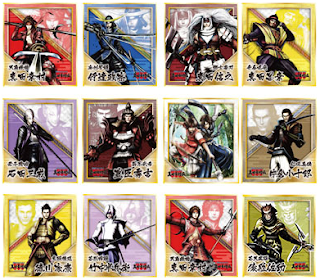 These items are also joined by two new sets of merchandise. The Sengoku Basara: Sanada Yukimura-den Metal Strap Collection costs ¥5,500 before tax and includes ten different strap designs. The Yukimura and Masamune straps have their 'Phoenix' and 'White Cross' costumes on the larger part with Benmaru and Bontenmaru on the small tags respectively. Everyone else has their clan crest on the smaller tag.

And a new batch of Capcom x B-Side Label stickers will be released on 29th September 2016. The Phoenix, White Cross, Masayuki, Nobuyuki and Childhood designs are ¥400 each before tax, or you can purchase a set of all five for ¥2,000.

In addition, the shops will host lucky dips which cost ¥450 to enter. If you're lucky you'll win the top prize of a canvas pouch:

Next come a range of magnetic clips:

And nobody will go away empty handed, because everyone else wins a collectible Sengoku Basara: Sanada Yukimura-den card.

The next two-in-one novel rerelease is confirmed 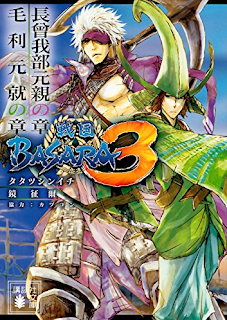 There are also a couple of preview illustrations to enjoy. 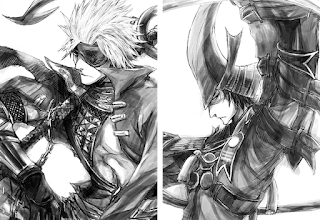 As expected, the fourth and final omnibus rerelease will be Sengoku Basara 3: Ishida Mitsunari No Shou/Tokugawa Ieyasu No Shou ('Ishida Mitsunari Chapter/Tokugawa Ieyasu Chapter') which will finish the series off on 10th August 2016. I hope we get some new novels soon! I imagine that there will be an announcement for the first collected volume of the Sengoku Basara: DOKUGAN manga in the next few weeks since it's already up to chapter six.
at 12:19:00 am