The Capcom TV team got together with producer NonakaP to demonstrate some Date Masamune gameplay and also show off the new game's Sanada Trials mode. The Sengoku Basara segment didn't start until the show had been going for a couple of hours, but finally NonakaP showed up and charmed the presenters with his strange impersonations of the series' mascot character, Ashigaru-kun. 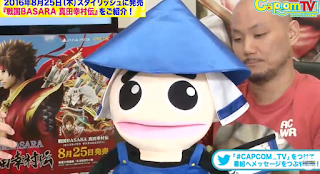 NonakaP then picked up his controller and started off with a Date Masamune gameplay demonstration on the Odawara stage we saw in the last official live broadcast. The other hosts were getting really fired up just watching; the Mad Drive/Rampaging Dragon mechanic got everyone excited as Masamune charged around with a glittering aura tearing through everything in his path. 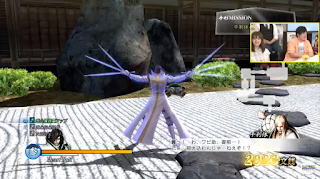 I noticed at one point that a red tsuzura chest gave a small amount of both HP and Basara when it was broken. I should pay more attention to the chests since they've obviously been rebalanced to accommodate the new Bushin system. 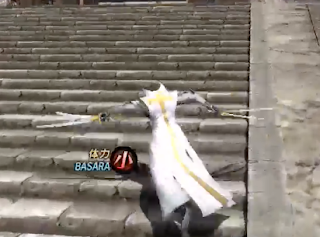 The LINE keyword for this week's episode was つながる ('connected') and the reward was a picture of Yukimura and Masamune with their younger counterparts. 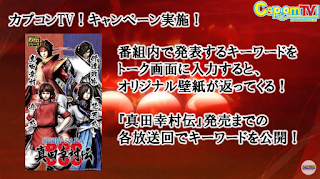 I was quite disappointed as I was expecting some footage from the Sanada Trials mode (not that it really needs it) but the show ended right after the Odawara stage demonstration and news bulletins. NonakaP was cheated! 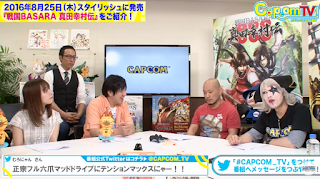 If you missed the show, the highlights should appear in the Capcom Channel YouTube archive in a few days.

Another recent event was the Famitsu Presents Sengoku Basara: Sanada Yukimura-den Summer Early Access Gathering in Tokyo, where a handful of lucky fans were able to play the game and listen to a presentation from KobaP. Capcom TV included a very brief video clip from the event during its news coverage this week, but Famitsu already published a much more detailed report from the event floor. It seems that the players were still protected from learning too much about the plot by having the demonstrations end before pivotal moments but they got a good chance to try out the characters' move sets, and the reporter said they flowed really well. The stage presentation yielded a few tiny scraps of information.
Another demo event will take place in Osaka this weekend with NonakaP, so perhaps there will be more reports after that.

Furthermore, on 16th July 2016 there will be a special in-store event in the Shibuya LABI branch of Yamada Denki, which promises to feature both Sengoku Basara: Sanada Yukimura-den and Monster Hunter Stories with live gameplay and other content. Additional details will be announced soon. I wouldn't be surprised to see KobaP or NonakaP showing up there for another presentation.

About to read Chinese? The official website has now been fully translated

The official Chinese-language website for Sanada Yukimura-den launched last week courtesy of Capcom Asia. There are also subtitled Chinese versions of the first two promotional videos so fans can check out the translation.

A sale is currently running on the Japanese PlayStation Store to promote the new game's release in August and highlight the release of the original Sengoku Basara in the PS2 Archives collection. From now until 24th August 2016, you can purchase special bundles of the old game plus a custom theme and avatar for all forty individual characters from Sengoku Basara 4 Sumeragi for ¥500 per character instead of the standard price of ¥1,029, or grab the bundle with all forty custom themes and avatars for just ¥1,059 instead of ¥3,069 with the Sengoku Basara 1059 Set (1059 can be pronounced 'Sengoku' in Japanese).

Animate offers a small bonus to its email newsletter subscribers

Every month, fans who opt in to receive Animate's email newsletter receive a smart phone lock screen image as a gift. July's bonus image is Sengoku Basara: Sanada Yukimura-den, so if you want to apply you can send a blank email to the email address posted at the top of this page and click the confirmation link in the reply they send. Your membership should be processed within 3-4 days. 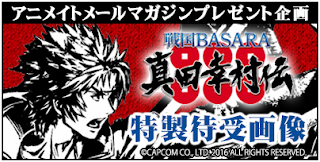 The new, more combat-heavy Zangeki Sengoku Basara 4 Sumeragi: Honnouji No Hen stage play started its limited run last Friday and so far reviews have been positive. To celebrate the opening of the show the official website changed its front page to incorporate this image of the entire cast flying through the air together. 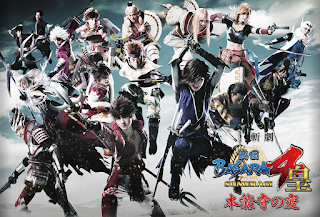 Early reports from the dress rehearsal (with pictures) can be found at 4Gamer, Dengeki, Famitsu, Gamer and Spice, as well as all over Twitter. One surprise which wasn't revealed until right before the play began its run is that the cast had a secret guest showing up on 3rd July: Miyashita Yuuya (Kobayakawa Hideaki).

The reason for Miyashita's appearance was that Taniguchi Masashi, who has been playing Akechi Mitsuhide (and Tenkai) in the stage play series even since it began back in 2009, will be graduating from the series when Honnouji No Hen finishes its run. This is the very last chance to see him in the role. The stage play's versions of Kingo and Tenkai had excellent chemistry and quite a few fans are sad that they'll never be appearing on the same billing again in future.

It wouldn't be a Sengoku Basara stage play without at least a little exclusive merchandise, and Honnouji No Hen has the following on offer to lighten the wallets of its attendees. 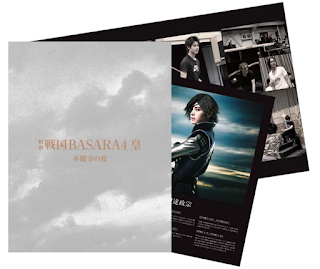 A commemorative t-shirt available in a choice of black, red or navy colours, for ¥2,500: 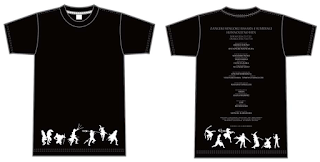 Thirteen different three-piece sets of photographs of the characters for ¥500 per set:

And thirteen different blind-packaged tin badges for ¥300 each: 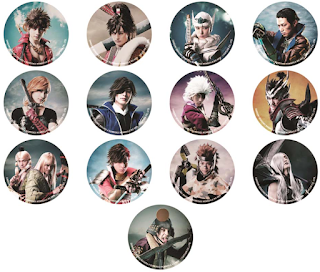 The listing for the official DVD recording has also gone live. Unfortunately it's another Japan-only Ace Shop exclusive. The cover artwork is cool (though I can't help but think a slightly more flattering image of Nobunaga could have been chosen). 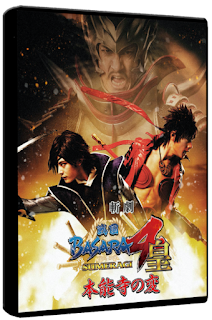 The double DVD set costs ¥7,000 plus ¥600 for domestic shipping, including tax. It include the full stage play (approximately 160 minutes) plus around two hours of extras, including content such as cast interviews, footage from the 'after talk' shows. As usual, no English subtitles are listed. The release date is tentatively planned for late October 2016. A booklet is included with the first press edition, and those who make their reservation at the stage play venue will also receive a bonus photograph along with their DVD.

To finish off the stage play news, like before the Roppongi branch of the Pasela Resorts karaoke and entertainment chain is running a special Sengoku Basara menu until 10th July 2016 to give stage play visitors the chance to dine (or sing) in style a short walk from the theatre. 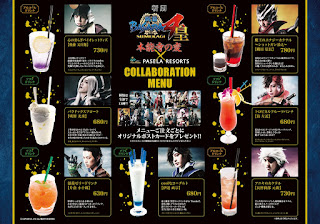 Some of the dishes are recycled from previous events but I'm very curious about Uesugi Kenshin's Chilled Salt Lemon Pasta and Akechi Mitsuhide's 'paradox float' drink. 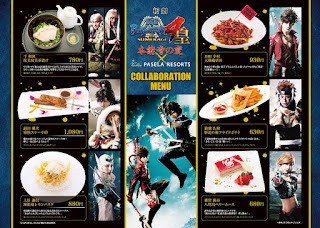