As promised, today KobaP held a stage presentation at the Jump Festa event and gave the assembled crowd a sneak peek at the first video footage for Sengoku Basara: Sanada Yukimura-den. Sadly, Capcom wasn't streaming any of its stage presentations at all so I've had to make do with various fan accounts from social media. The new video seemed universally well-received with people commenting that they were glad they came to watch the presentation for it.

A few notes (I hope to be able to add to this later since there's so little information):
There's another presentation tomorrow morning at 10:40am Japan time, but I'll only make a new post about it if I hear any new details since the content is likely to be the same. I hope that the video will appear on the game's official website very soon. Previous event videos have appeared as early as the following Monday, but since the announcement is still so new it's difficult to be sure when the clip will become available.

Edit (20/12/2015): Gamer has posted some stills from the presentation as part of its Jump Festa coverage. The article describes the video as a scene from a confrontation between Yukimura and Masamune, and there was a loud cheer from the audience when Masamune appeared on screen. KobaP went over the information from last week's Weekly Famitsu magazine afterwards and mentioned that there were new game mechanics but didn't go into any further detail. He also outright said that it was possible for Masamune to use all six blades throughout the game this time; there was a lot of surprise from the crowd at those comments. Apparently, the new Osaka Summer Siege stage will be quite different to what we have come to expect from Sengoku Basara.

Edit (21/12/2015): 4Gamer has now posted its coverage too and it sounds as though we can expect the new video very soon. Since the gaming sites are taking a while to publish their reports I'm guessing it won't be today, but instead when the official site updates (on Thursday, if they're consistent). Let's see. OneSanitarium also noticed that the website is specifically calling it a one-player game; this might mean there's no co-op mode at all. The game's genre was quietly changed back to the usual 'Stylish Hero Action' too.

Speaking of events, one of the big announcements back at TGS 2015 was that Capcom were collaborating with Sharp to create a Premium Cocorobo - a talking roomba vacuum cleaner based on Date Masamune. Today's event had a demonstration of the vacuum cleaner and it seems to have caused a lot of excitement.

The listing is now up on the e-Capcom store and the first thing most people will notice is the price: ¥162,000 including sales tax. That's a huge amount of money for a novelty vacuum cleaner! It comes with its own voice recordings from seiyuu Nakai Kazuya, special packaging and an instruction manual on CD, and the device itself has all kinds of advanced features such as connecting to wireless Internet to download news, weather reports and interacting with smartphones.

Preorders will be accepted until 18th January 2016 or until all of the units are sold; it's a strictly limited item. The roomba is expected to ship in March 2016. 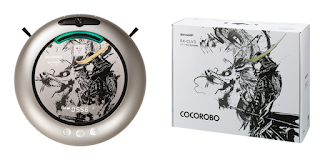 Ashigaru-kun has been very busy this week, not just appearing at the event above but also writing up the third of his reports about the new Sengoku Basara menu items at Shinjuku's Capcom Bar. This week is the last article in this series so he talks about the various drinks which fans can buy, with help from the bar's manager who describes everything in more detail. It's not that great unless you like pictures of Ashigaru-kun's goofy face, since the official pictures of the drinks are already good enough to give a good idea of what they're supposed to look like.

Today marks the release date for both Tane Jugou's comical Wan-Nyan Sengoku Basara manga and Sumeragi's Mame Sengoku Basara 4 volume 3 (the final book). To draw attention to the releases, the Dengeki Online website has posted a preview article showcasing some of the artwork.

For a limited time, customers who purchase either book through Animate will receive a mini shikishi paper with illustrations drawn by the original manga artists. Previews of both papers are also included in the Dengeki Online article.
at 6:40:00 am