The Sengoku Basara Magazine website has now updated along with a preview article on the Dengeki site. The correct reading of the name of the new scenario novel is apparently Sengoku Basara 4 Sumeragi Riten Daisakai ('The Grand Tea Ceremony Cast Out From Heaven').

My copy won't arrive in the UK for a few days so I'll summarise the information I've found about the new issue so far.

The website update formally confirms that Sengoku Basara 4 Bontenmaru-hen will be released in compiled book form on 26th September 2015, priced at ¥616. They also included the cover artwork, which is rather understated for a Sengoku Basara manga. 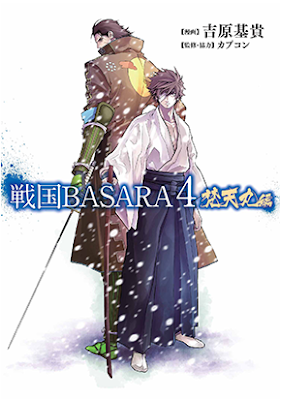 The previously-announced Showgeki Basara Talk! Vol. 5: Sakon & Katsuie No Maki Special-ban talk CD scheduled for 26th September 2015 now has its own cover artwork as well, drawn by Sumeragi. As a reminder, Sen No Rikyuu's seiyuu Sakurai Takahiro will appear as a guest and the BASARA CHALLENGE skits will be the family restaurant one from the last issue of the magazine, an episode about working as lifeguards at a pool and an exclusive bonus skit about a promise at an athletics meet. 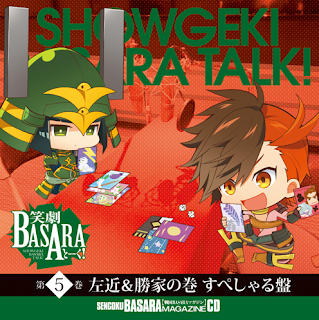 Next, remember these cute designs which are being used for the upcoming Mame Sengoku Basara 4 Trading Rubber Strap Collection?

There will also be a set of Mame Sengoku Basara 4 Trading Can Badges available for the same characters priced at ¥324 each or ¥4,536 for a box. Preorders will open in late September ahead of their Autumn 2015 release date.

Finally, there's one sad piece of news, especially for those who had been eagerly waiting for their favourite characters to appear on the cover of the magazine. Twitter user @tobitaka626 posted a snapshot showing that the final page has a message for the fans instead of the usual preview of the next issue: "Thank you very much for reading up until volume 10! Sengoku Basara Magazine is certain to return, so until that time..."

I hope it really does come back someday. I was never expecting them to keep it going for this long, but it's been such a treat to get all of this Sengoku Basara content in a single place every few months that it will be sad to lose it. There's still a regular Sengoku Basara section in each month's issue of Dengeki Maoh, of course, but does this also mean that the Wan-Nyan Sengoku Basara manga and the scenario novel series have finished for now?

I'll try to work on translating the character background columns from Dengeki Maoh periodically to make the wait for more news about the magazine a little better.
at 1:16:00 am