A software update is released for Sengoku Basara 4 Sumeragi

Today (11th September 2015), a software update was made available for Sengoku Basara 4 Sumeragi with a few small enhancements. The official patch notes list the changes as follows.

For PlayStation 4:
For PlayStation 3:
I wonder which other bugs were fixed? It's possible that the sound issue on PS3 might have been addressed, or that the glitch fan OneSanitarium found to travel to inaccessible parts of stages could have been removed. In any case, I'm happy to see that Capcom has taken fan feedback on board and made these small, yet significant adjustments.

The next wave of Sengoku Basara merchandise is confirmed

It's rare that I post some gaming information without there also being new merchandise to reveal at the same time, and today is no different. The following items will be available across Japan from 24th September 2015.

First there's a selection of twelve Sengoku Basara stamps priced at ¥500 each. There will be designs for Masamune, Kojuurou, Yukimura, Shingen, Sasuke, Ieyasu, Mitsunari, Sakon, Katsuie, Keiji, Motochika and Motonari:

A choice of four different Sengoku Basara chrome cases intended for storing inkan seals. These are priced at ¥1,000 each and the available designs are Masamune/Yukimura, Ieyasu/Mitsunari, Sakon/Katsuie and Motochika/Motonari: 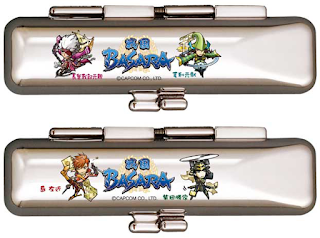 A seelction of five pouches priced at ¥1,200 available in Masamune, Yukimura, Shingen, Ieyasu and Mitsunari designs:

Finally, there are five different inkan seal sets priced at ¥4,500 and available in Masamune, Yukimura, Shingen, Ieyasu and Mitsunari designs: 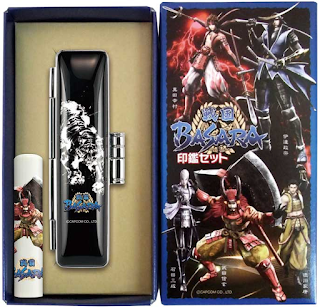 I'm pleasantly surprised to see Shingen is featuring prominently in this range of merchandise.
at 9:53:00 am