I was getting a little concerned that the series was going to be completely overlooked this year! Fortunately, Capcom have now confirmed that series producer KobaP will be giving a 45-minute stage presentation at 16:00 on 19th September 2015. The Sengoku Basara Series Special Stage will take place on the main stage at the Capcom booth and promises to include a look back at the ten year anniversary, a Sengoku Basara 4 Sumeragi challenge for members of the audience and the latest merchandise/event announcements.

I hope that there will be some events scheduled over the winter to complement the new stage play and keep the series in the news.

The latest Sengoku Basara merchandise has been revealed to be a set of embroidered polyester patches. The six designs will be available from late November 2015 for ¥2,000 each.

I rather like these designs, they're tasteful but immediately recognisable at the same time. 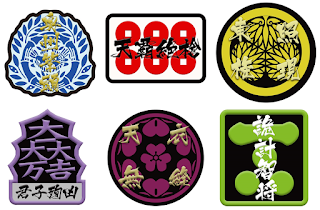 The delayed Sengoku Basara: Shijitsu De Wakaru Sengoku Basara No Sekai ('Discovering The World Of Sengoku Basara Through Actual History') reference book definitely looks as though it will meet its September release date this time, as Amazon have updated their listing to add the cover artwork. I'm looking forward to finally getting my hands on this after preordering back in March! 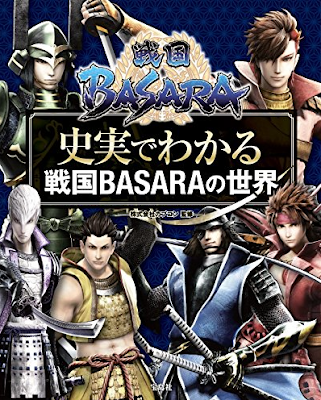 Photo reports from the Taka No Tsume crossover event in Shibuya

As previously mentioned, Frogman's Himitsu Kessha Taka No Tsume (Secret Society Eagle Talon) series is joining up with Sengoku Basara for an exhibition in Shibuya this month. A few news outlets have visited the venue of the Sengoku Basara x Himitsu Kessha Taka No Tsume: ~Sengoku Heroes And Castle Invasion~ exhibition and posted their impressions. The reports from 4Gamer and Famitsu give a good view of the crossover merchandise and props on display.
at 5:00:00 pm