The Butai Sengoku Basara vs Devil May Cry stage play successfully completed its run today, and as it drew to a close a new announcement was made: Butai Sengoku Basara 4 Sumeragi is coming a few months from now! I was so excited when the fan club email arrived by email.

A new website is already up and running so a few details have been confirmed. Ujigawa Masanari will be handling the composition and direction, while KobaP and YamamotoD are credited with planning and supervising. The game series' scenario writer Matsuno Izuru will be assisting with the story. The cast will be announced on Monday 7th September 2015. 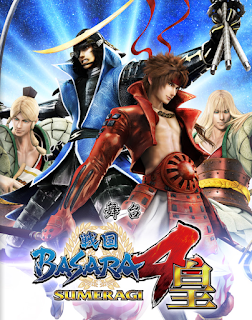 It makes sense that Masamune and Yukimura are back in the spotlight as their current actors have quite a few shows under their belts now, presuming that they haven't been changed, whereas Mitsunari and Ieyasu will probably be played by newcomers - if they're going to be in this play at all. They might choose to base this play on a small number of characters and expand the story in future instalments like the old Butai Sengoku Basara 3 series. Even then, the Toyotomi characters are quite important to Rikyuu...

I wonder whether there will be two different actors for Rikyuu or whether one person will cover both of his personalities? It's tough to be patient and wait for more information!

The official website has also confirmed that the Butai Sengoku Basara vs Devil May Cry DVD which attendees have been able to preorder at the live shows will be available in 'autumn', so I think we can expect preorder listings for its general release to appear in the next few weeks.

Preview of the cover artwork for Sengoku Basara Magazine vol. 10

I stumbled upon this preview last night but only mentioned it on social media. Manga Oh recently updated their listing for Sengoku Basara Magazine vol. 10 in anticipation of its release tomorrow, and the small preview image shows that Kojuurou has been given a brand new CG illustration for the cover artwork. Larger versions should be available very soon as fans in Japan receive their copies. 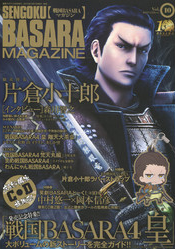 I'm so happy; his official Sengoku Basara 4 illustration has never appealed much to me but this one is much better, highlighting his sword and looking pretty cool. I wonder who is going to be honoured on the cover of the eleventh volume? News from the magazine should start leaking out over the next few days.
at 5:10:00 pm