Promotion for the Butai Sengoku Basara vs Devil May Cry stage play is in full swing now that it has begun its short run and the gaming press websites have obligingly posted details for attendees.

Fifteen luck fans who see the play between the 24th and 28th August 2015 will be given commemorative tote bags. Each bag will have the date of the performance and the picture printed on it will vary depending on the day, making it a truly rare collectible for hardcore fans. 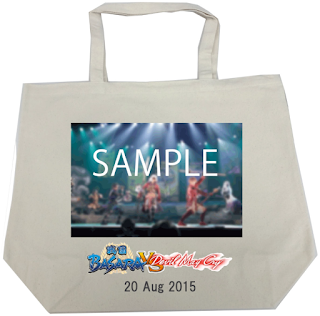 There will be special themed food and drink at the theatre's adjoining cafe like 'half-human, half-demon pizza' and various cocktails, and attendees can preorder the DVD version of the play. The DVD will go on sale in the autumn; thank goodness they're planning one this time!

The stage play will also feature the debut of a 10th anniversary theme song for the Sengoku Basara series. Titled Toki Wo Koete ('Beyond Time'), the song is performed by SOLIDEMO with lyrics and music by Miyakoda Kazushi. KobaP is credited with co-writing the lyrics.

The dress rehearsal for the play took place this week and this has led to a flurry of official reports. You can see the pictures at 4Gamer, Anime Anime, Dengeki, Famitsu and Gamer and a short video at Theaterclip. There are also the usual goofy pictures on Twitter for those following any of the actors.

To tie in with the launch of the stage play, the two Devil May Cry DLC costumes from Sengoku Basara 4 Sumeragi will be available at a special discount. The Date Masamune/Ishida Mitsunari Special Costume Set (DMC Dante & Virgil) is a bundle which includes both outfits for just ¥300. It will be available until 31st August 2015. This offer is exclusive to users with the PS3 version of the game.

Lacters has been working hard on a Spanish translation guide for Sengoku Basara 4 Sumeragi and the first parts are now ready for viewing! You can view the guide here; further updates will be added over time.

They're also running a special giveaway for Spanish speaking fans which you can check out at this link.

This was originally announced during the tenth anniversary live stream but now we have more details of the Taka No Tsumedan No SHIROZEME ('Eagle Talon Squad's Castle Invasion') event planned for 14th November 2015. This event simulates an attack on Shimane Prefecture's Matsue Castle and sounds like a brilliant way to increase interest in historical warfare strategies.

It's also the inspiration behind a collaboration between Frogman's Himitsu Kessha Taka No Tsume (Secret Society Eagle Talon) series and Sengoku Basara. This will take the form of a free exhibition in the Shibuya Parco Part 1 basement between 3rd September and 28th September 2015. The official name is Sengoku Basara x Himitsu Kessha Taka No Tsume: ~Sengoku Heroes And Castle Invasion~ and it will involve displays featuring crossover artwork, photo spots for visitors to take pictures with their favourite characters, displays showing the plans for the main Castle Invasion later in the year, displays of armour, weapons and a diorama of Matsue Castle, and an opportunity to dress up in traditional armour and have your picture taken for a fee. 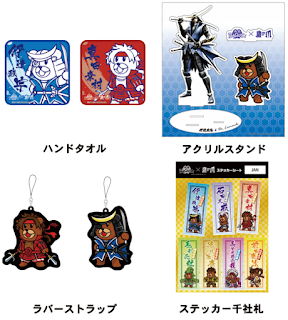 Visitors who spend more than ¥2,000 on merchandise in a single transaction will be given one of ten randomly-packed commemorative coasters as a gift.

A summary of the attractions at the Capcom Shop in Oedo Onsen Monogatari: Minoo Onsen Spa Garden event is showing off the event-exclusive goods which can be purchased. 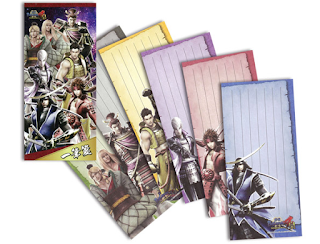 And a Sengoku Basara 4 Sumeragi tenugui towel for ¥400: 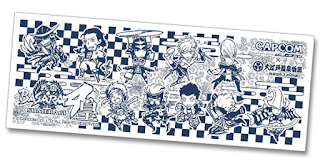 Fans, which are obtained through a roulette game which costs ¥500 to enter: 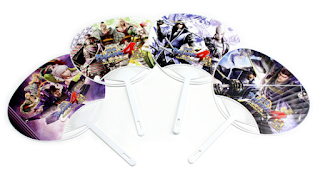 And tote bags, which come from a stamp rally game at the venue: 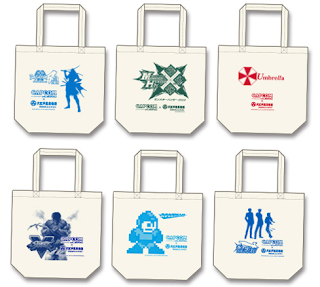 Different (yet equally exclusive) new merchandise will be available for fan club members who attend the Fan Meeting events this September. Nine new 'favourite warrior' badges will be released to help fill in some of the gaps for people whose favourite character wasn't represented before - Yoshihiro gets to appear on some merchandise for once! 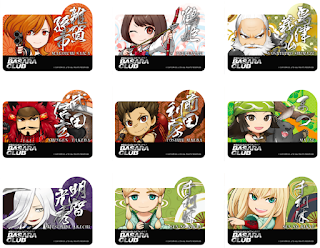 It's the first time that uchiwa fans have been available for the fan club, even though they're popular merchandise items at most gatherings. Eight designs will debut at the events. 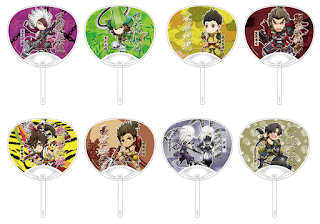 Pricing and availability details - as well as a few more items - will be posted at a later date.

The ongoing saga continues as the preorder listing for Takarajimasha's upcoming book Sengoku Basara Seishi ("The Official History of Sengoku Basara") has returned to some online stores such as Manga Oh. Strangely, in between me drafting this post and finishing it off the title changed once again, so it's now being listed as Sengoku Basara: Shijitsu De Wakaru Sengoku Basara No Sekai ('Discovering The World Of Sengoku Basara Through Actual History'). The release date is listed as 18th September 2015 so perhaps it's actually coming out this time - it's been a long wait since the first solicitations back in January!

The MyCapcom website runs a Capcom Legends blog series and the most recent entry is all about how they created Keiji and some of the series' classic antagonists. The early design pictures have featured in art books before but for some fans this might be the first chance to see them.

The last of the (Approximately) 10-second Theatre video updates

The final video in the scheduled series of Sengoku Basara 4 Sumeragi promotional clips was posted on Wednesday as promised. (Approximately) 10-second Theatre: The Quickest was one we had glimpsed in photographs from a live event early on in the game's advertising campaigns.


With all of the Sengoku Basara 4 Sumeragi campaigning gradually coming to an end, I guess that it won't be long now before we start hearing information of the next Sengoku Basara projects on the horizon. I doubt they'll have anything about a new game for a while since most fans are still getting to grips with the current one (the series isn't mentioned on their Tokyo Game Show schedule at all aside from in a note about the merchandise stand). Perhaps there are some other treats planned?
at 3:12:00 pm