News roundup: Books, videos and an update about that pesky PS3 audio problem

Listings have appeared on Manga Oh and Amazon Japan for a new book from Futabasha tentatively titled Sengoku Basara 4 & 4 Sumeragi Script Collection, scheduled for release in mid-September 2015 priced at ¥3,024 including taxes. It's been a while since the last script collection was released and this should make answering questions about the game's dialogue easier whenever it's necessary to check details without playing through the whole thing again. Hurrah.

The book is going to include illustrations, CG artwork and setting materials relating to fifty characters from the series, as well as comments from KobaP and YamamotoD. Cast messages, interviews and commemorative autographs from the seiyuu will ensure there's plenty of content for fans to enjoy.

The survey is quite quick, so even though it specifically mentions that it's supposed to be for Japanese fans I thought some overseas fans might also be interested in sharing their opinions. The questions are as follows.

Respondents who live in Japan are entered into a draw to win one of ten ¥1,000 QUO cards, but as foreigners all we will have is the satisfaction of sharing our thoughts. Simple Japanese is best if possible since the best comments are going to be printed in the finished book!

The deadline for participating in the survey is 4th September 2015.

The summer Sengoku Basara collaboration event at Nikko Edomura (Edo Wonderland) is still running and Capcom's social media team have been highlighting four exclusive ¥300 stickers you can obtain when you visit the venue. The staff are hoping that the designs will make fans of the series grin knowingly. 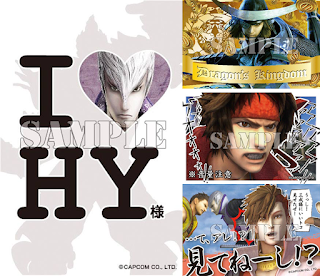 Reports from the weekend's live event at a Saitama museum

Several news sites have been covering a recent appearance by Nishimoto Yu-ki, the artist who created the stunning ink illustrations used for Giga Basara attacks in Sengoku Basara 4 and Sumeragi. Nishimoto's paintings are currently on display as part of the Sengoku Zukan -Cool Basara Style- ('Sengoku Reference Book -Cool Basara Style-) tie-in event at the Saitama Prefectural Museum of History and Folklore, and on 16th August he visited the museum in person to demonstrate live ink painting and talk about his work. The photographs in the Famitsu and 4Gamer reports give a good idea of what it must have been like to watch Nishimoto's dramatic performance.

From what the reports describe, it sounds as though Nishimoto works quite quickly once he has decided how the finished artwork should look but some of the Sengoku Basara illustrations took quite a long time to visualise when he was working from scratch. It sounds as though it would have been a very interesting presentation to attend.

The latest Sengoku Basara 4 Sumeragi videos from the Capcom Channel


Wednesday's upcoming video should be the last one in this series, so once that's available it's up to Capcom to inform us about any further promotion. I'm still hoping for some more DLC!

Waiting for Heavenly Blue? Try listening to the album preview for now

I'm seeing that a lot of fans are anxious about the continuing wait for Ishikawa Chiaki's upcoming CD with the hauntingly beautiful Sengoku Basara 4 Sumeragi ending theme, Heavenly Blue. The preview trailer for the album might help in the meantime as you can also hear what the new versions of her older Sengoku Basara songs sound like towards the end.

Thank you very much to everyone who shared their experiences about the reported sound problems with Sengoku Basara 4 Sumeragi. The reports were all extremely detailed so it was easy to see the similarities between what everyone was describing. So far, it seems that:
All of the feedback has convinced me that it's a widespread problem given that there are relatively few importers yet many have noticed the issue. It affects all of the PS3 copies but the individual speaker setup probably affects how noticeable it is. The good news is that the PS4 version seems fine, so presumably there are no problems with the original game assets.

One of the people who contacted me said that someone has asked Capcom for assistance already, so I checked and they have posted a FAQ on their support site which acknowledges the problem and states that they had to reduce the audio quality for PS3 due to memory limitations. That seems a bit weak so I might send them a list of these complaints too so they realise that they need to do something about it.

If you want to complain, please use this link then press the red button to access the form. Pick the top option in the list ('glitch') then the fourth checkbox ('other'), then 'PlayStation 3', then the top option if you bought the game new on disc (if you bought it from PSN, it's the third option).

Next comes the game title (it makes no difference so you can just write 戦国BASARA4 皇 通常版 BLJM-61248) and date of purchase. Pick the first three options to confirm that it happens every time then skip the small text box as there is no error code.

The huge text box is for describing the problem, so go ahead and do that. They will only respond in Japanese but they will probably read English complaints as well (or you can just post the link to the Amazon review and say something simple like "bad audio like this!"). Pick the second option at the bottom of the text box, as the top one is for people with a damaged disc.

Finally, add your personal details. The first four boxes are for your name in kanji then kana, then it asks for your age. You can skip everything else other than the boxes for your email address at the bottom.

Capcom will probably just apologise and say there is nothing they can do, but they're advertising the game as having good quality sound so I think it's fine to complain if you're not happy with the muffled audio. Even if they really did have to compress the sound more for the PS3, it's clearly being compressed too much if it's disrupting the game for a number of users. Good luck!
at 1:04:00 am