It's been a relatively quiet week as far as Sengoku Basara news goes, though that doesn't mean nothing's been happening.

It's Friday, which means the usual teaser screenshot gallery from tomorrow's new anime episode courtesy of Animate TV. The international streams seem to have been gradually catching up with the Japanese broadcast as promised; in the US and Canada, FUNimation subscribers will be able to watch episode 5 on time with English subtitles!

From 1st August 2014, Capcom will be running a special 'mystery-solving' event at More's City, a shopping mall in Yokosuka, Kanagawa. The catchily-named Capcom Nazotoki Challenge pits visitors against a choice of four challenges, and Sengoku Basara 4 is one of them (along with Biohazard, Hakase No Jikkenshitsu and Yume No Sekai Kara No Toubou ~escape from dream~). According to the description, you play a member of the Ishida army's Sakon squad on a mission to reclaim Osaka Castle from Masamune and Yukimura by solving puzzles. It sounds pretty fun.

It's customary for the recent stage play performances to offer an 'official tour' package and the one for the next show has now been confirmed. I'm going to assume that anyone who is likely to want to go on it will be able to read the details on that page already, but it's worth noting that attendees will receive three exclusive bonuses this time: a bromide of the stars, an original poster and a pencil case. Each item will be themed around Butai Sengoku Basara 4.

Is it that time of year again already? The 51st Masamune-kou Matsuri will take place on the 13th and 14th September 2014 in Iwadeyama-machi (Oosaki). The traditional local festival is once again using Sengoku Basara's Date Masamune on its posters to help promote the event in honour of the real-life Masamune, according to Twitter user @teruteru0293 who managed to spot one on display.

I've been hoping for more solid information about these but it seems that it's not forthcoming at the moment. The Wonder Festival event took place last weekend and visitors were able to take some snapshots of a few new prototypes.

Firstly, it seems that Mitsunari will soon be joining Masamune in Kaiyodo's 'Micro Yamaguchi' Revolmini figure line. The unpainted prototype has been shown off but there's no date yet. I wonder whether they're going to remake all of the original full-sized Sengoku Basara Revoltechs for the Revolmini collection before introducing some of the new characters? Some characters will obviously be much easier to turn into poseable figures than others...

The other prototypes on display were the newest additions to the Gift x Algernon plushie range: Sakon, Mitsunari, Motonari and Motochika. Famitsu has a good picture in this image gallery while user Nanahashi on Tumblr and @BASARA_GD posted some more shots. Since they seem to be selling so well, perhaps we'll get Ieyasu, Katsuie, Keiji and Hanbee next? In case anyone at Algernon is reading this, I'd definitely buy a Tadakatsu plushie.

Even more Judge End merchandise is on the way

AmiAmi have published listings for seven collectible ema plaque straps based on the characters of the new anime series. You can choose from Masamune, Yukimura, Keiji, Mitsunari, Motochika, Motonari or Ieyasu, and each will retail for ¥410 when they come out in late September 2014.

Special senjafuda stickers using the Judge End designs will also be available from late August priced at ¥300. The website doesn't say where to buy them at this time but the stickers are printed by special machines, which are usually strategically situated at tourist locations and hobby stores such as Animate and the official Capcom shop. You pay the fee and then get to personalise them with your name, sticker design, font and other details until you've created something to your liking. 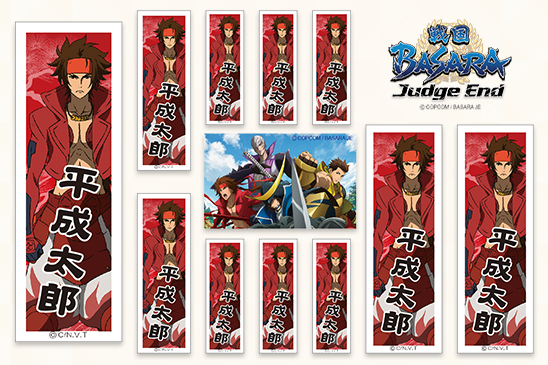