The last few days have been very quiet in the aftermath of the Obon period, and perhaps also because next week is when Sengoku Basara Magazine will be released. It's likely that the most interesting news is being saved up to draw attention to the magazine. With that said, here are the latest developments in the world of Sengoku Basara this week.

A Sengoku Basara: Judge End calendar will be released for 2015

The official anime merchandise page updated today to add the new Sengoku Basara: Judge End 2015 Calendar, scheduled for release on 18th October 2014 from Try-X Ltd. The B3-sized calendar is priced at ¥1,600. It will contain six full illustrations as well as the cover artwork. 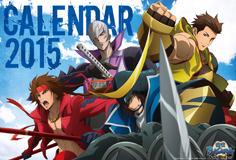 CD Japan has been listing the calendar for a few days already so other hobby stores should be accepting preorders any day now.

Another new addition to the official anime website is news of an upcoming Ichiban Kuji lottery event. Fans in Japan will be able to visit Animate stores, amusement arcades and book shops from Saturday 15th November 2014 to participate in Ichiban Kuji V: Sengoku Basara Judge End ~The Battle of Sekigahara~.

The Ichiban Kuji V series of lotteries is for 'visual' goods and the prizes will apparently include postcard-sized 'charamides', collectible pictures printed on photographic paper. There's also some kind of mobile lottery feature where you can vote and obtain battle flag-style posters. More details should appear closer to the launch date.

It's the second anniversary of the Capcom Bar and to celebrate they're launching some new dishes on 29th August 2014 to tempt people into visiting again. The full update can be viewed here; I'll focus on the three new Sengoku Basara specialities.

An alcoholic cocktail with vodka and ramune syrup. And six straws. 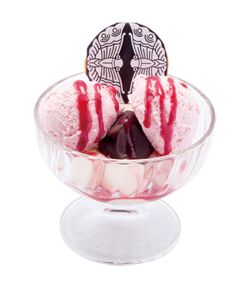 A traditional dessert made from red beans and other goodies. The shiratama dumplings are supposed to represent the prayer beads (they're at the bottom of the glass - it's a little hard to see at this angle).

According to the description, the indigo colour of the grape juice represents Mitsunari's cruelty while the white cream symbolises his earnest side.

I'd quite like to try the Mitsunari drink (especially if you get to keep the sword).

Sengoku Basara series producer Kobayashi 'KobaP' Hiroyuki recently tweeted a link to a short Sankei Shimbun interview he gave on the subject of the 'Reki-jo Boom' - the sharp rise in female fans who are genuinely fascinated by history. While female history buffs are nothing new, the 'reki-jo' phenomenon has been well documented in Japan and Sengoku Basara is regarded as a major contributor to the trend.

Most of the content of the interview reiterated content fans will already know so I'll avoid translating the whole thing word by word. In talking about the series' beginnings back in 2005, KobaP said that the media was drawing a lot of attention to the Sengoku period at that time. Since Capcom was known for its action titles, they decided to try making a Sengoku-themed action game.

The title of the series describes its unconventional approach to the setting; the word 'Basara' is supposed to refer to the flashy, individualistic behaviour of the characters. Capcom is known for its unique characters in series such as Street Fighter and most other titles at that time tried to keep their portrayals of historical figures realistic; in response, the team decided to make the cast as distinctive as possible. KobaP remarked that even relatively unknown warriors could be turned into 'cool characters'.

One of their original goals was to make the story accessible even to gamers who didn't have much background knowledge about the Sengoku period. They didn't particularly plan for the series to become so popular with women, they just wanted to change the image that Capcom games had of being difficult to play. There were some objections but in the end KobaP was glad they managed to appeal to a different set of gamers.

At the end of the interview KobaP noted that he'd like to arrange some kind of campaign to celebrate the series' tenth anniversary next year, and added that he also wants to keep promoting regional tie-ins for the series.

Lastly, here's the link to this week's spoiler-filled preview gallery with shots from tomorrow's new episode of Judge End on page two. For some reason the line of pictures of characters with ominous shadows over their faces amused me.
at 8:19:00 pm