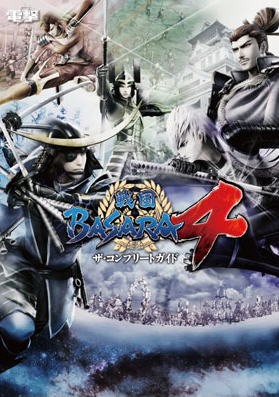 The 'review' part of this post will be brief as there's not a great deal to say about an official strategy guide. Sengoku Basara 4: The Complete Guide was published back on 22nd February 2014 by ASCII Media Works under the Dengeki label. It was priced at ¥1,800 and is still readily available from most online stores, including CD Japan, Amazon Japan, Yesasia Global and HMV Japan.

The book is thick at 400 pages and contains exhaustive lists of just about every possible piece of information a person could want to know about Sengoku Basara 4; it's much more detailed than V Jump's earlier Sengoku Basara 4 PS3 Edition: Sengoku Sousei Eiyuutan Dramatic Heroes Guide. If you can only buy one of the two and want a detailed resource to go with the game, I'd recommend this one. My first edition copy also included a Shibata Katsuie bookmark, which was a pleasant surprise! It seems that there are at least three bookmark designs available since commenter VegaManX4 received Sakon instead and I've seen talk of a Masamune design elsewhere. There's probably a Mitsunari bookmark available as well.

Another bonus comes in the form of six Mame Sengoku Basara 4-panel comics strips right at the end of the book. They're very simple gags which parody certain moves and scenes from the game; even though they're drawn more simply than the regular series, they're a welcome addition.

I can't even begin to fully summarise the new information contained in this book - and I wouldn't particularly want to annoy the publishers by trying - but there are some important details which I think that other fans would like to know. I'm going to make a few translated notes which might make it a little easier for people trying to track down all of the game's secrets through the language barrier.

First of all, some general facts.

The bulk of the new information is about the game's stages. The stage selection system in Sengoku Basara 4's Sengoku Creation mode has confused a number of people, so I think I'll try to explain how it works using my experience and the data in the book. I'll start with the basics.
With that out of the way, I'm going to present the next set of information in a huge list. We now have confirmation of how to achieve some of the more obscure special challenges on each stage - as well as the conditions for triggering the stages in the first place. It's more obvious in-game if you can understand Japanese since the battle reports announce the developments before each stage appears with a cutscene.

Abrasion: The Beauty of Insufficiency