There's going to be a batch of Sengoku Basara: Sanada Yukimura-den information in tomorrow's Weekly Famitsu as well so I'll be updating a little later with a translation of that. The preview promises that it will include details about the story from Chapter 6 onwards (Sasuke will appear), new gameplay elements will be explained (the 'Six Circle Challenge' and 'Rainbow Bonus' mechanics, plus details of the new highest 'Sanzu River' difficulty level) and there will also be a few tie-in costumes to reveal.

Episode 47 of Capcom TV aired today and it included the coverage of Sanada Trials mode as expected. Like before, they filled the entire show with content about other games so it was a long time before the Sengoku Basara content appeared.

It would seem that NonakaP is busy promoting the game elsewhere in Asia at the moment, so Ashigaru-kun appeared instead and joined the Capcom TV presenters. 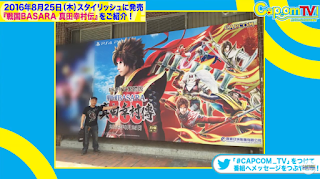 I had my reservations about how well 'Ashigaru-kun' was going to be able to play when the mysterious shadowy figure controlling him was handed the controller. 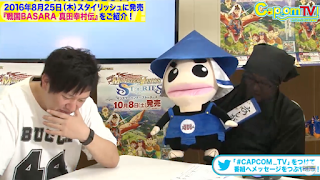 In any case, the demonstration started out with a powered-up Yukimura in his 'Phoenix' outfit, which looked pretty great in action. They ran through the first few stages we've already seen, giving everyone an introduction to the Sanada Trials 'survival' mode. 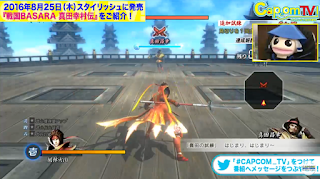 It was then time to make things more interesting and they switched to Fuuma Kotarou so the various hosts could try out some challenges. They only got up to the sixth stage before dropping out so it was all content we'd seen before, then they repeated with Ashigaru-kun controlling Sanada Nobuyuki. He did a lot better. 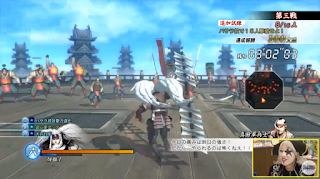 Here's the results screen in Sanada Trials mode. It's laid out very similarly to the story mode results screen I translated the other day. The only difference is that the Six Circle Challenges (these don't exist in Sanada Trials mode) have been replaced with bonuses for optional objectives completed on each stage, and a bonus for the total number of consecutive trials you beat in that run. 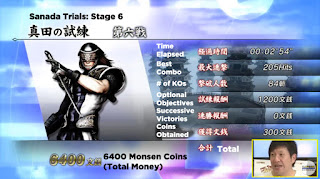 This week's special keyword for LINE is 2周年 and it unlocks a wallpaper of Masamune with Kojuurou. 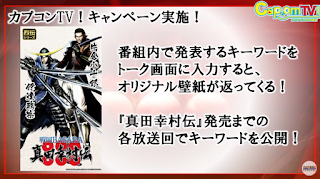 I'm expecting that tomorrow's dedicated Sengoku Basara broadcast will be a lot better. I'll be at work so I'll post a catch-up in the evening once I've had a chance to watch the timeshifted version.

As a bonus (and because it doesn't really need its own news article), the official Sengoku Basara Twitter account posted a behind-the-scenes design sketch earlier showing the concepts for his new Hinokaku costume from the game. They were trying to convey the image of a young Yukimura growing up.

The official Twitter and LINE accounts have been quite active recently; it's good to see the information flowing!

Zangeki Sengoku Basara: The Battle Of Sekigahara is announced

Zangeki Sengoku Basara 4 Sumeragi: Honnouji No Hen finished its run at the start of this week and the next play in the series was immediately revealed. The new stage play will run in Tokyo (Tennouzu's The Galaxy Theatre) and Osaka (Umeda Arts Theater: Theater DramaCity) in February 2017, and tickets will cost ¥7,900 each. Further details and cast information will be announced in August.

The announcement was accompanied by a video featuring scenes from the latest play.


The stage play series has already covered Sekigahara from a number of angles but this is the first time that it will receive the more action-packed 'Zangeki' treatment. The actors for Masamune, Mitsunari and Ieyasu have all graduated, so this might offer an interesting new spin on the familiar story. Furthermore, it seems likely that Kingo will return but will he get a new Tenkai? If so, Tenkai will need to be recast as Taniguchi Masashi graduated along with Date Masamune's Shiono Akihisa at the end of Zangeki Sengoku Basara 4 Sumeragi: Honnouji No Hen.

Yorikojun is being credited with composition and production again, with the games’ scenario writer Matsuno Izuru assisting with the story. Sengoku Basara creators KobaP and YamamotoD are credited with planning and supervision as usual.

Those of us locked out by the region restriction on the web radio broadcast of Sengoku Basara -Nekketsu! Yose Raji!- ('Sengoku Basara: Hot-blooded! Variety Theatre Radio!') can rejoice as listings (CD Japan) have started appearing for a ¥2,500 DJCD: Sengoku Basara -Nekketsu! Yose Raji- disc release from Frontier Works. The release date will be 24th August 2016 to coincide with the new game. Seiyuu Hoshi Souichirou (Sanada Yukimura) hosts the show, and the featured guests will be Nakai Kazuya (Date Masamune) and Morikawa Toshiyuki (Katakura Kojuurou). Unfortunately, the episodes which were broadcast online don't seem to be receiving a CD release at this time. 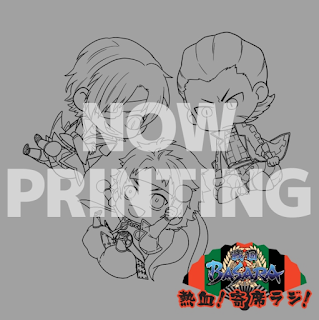 Customers who reserve the CD at Animate will be able to enter a draw to buy ¥3,800 tickets to one of two special events at Tokyo's Yamano Hall on 14th August 2016. Hoshi Souichirou will be accompanied by Seki Tomokazu (Ishida Mitsunari) and Okiayu Ryoutarou (Toyotomi Hideyoshi) for the afternoon event, and by Nakahara Shigeru (Mouri Motonari) and Ishino Ryuuzou (Chousokabe Motochika) in the evening.

The special events will even have their own exclusive merchandise: three acrylic key holders for ¥700 each, and a set of badges for ¥1,500.

It's been announced that there will be a promotional tie-in between Sengoku Basara: Sanada Yukimura-den and the upcoming movie Sanada Juuyuushi ('Sanada Ten Braves'), Tsutsumi Yukihiko's retelling of the story of the ninja team which supposedly worked for Yukimura as the Sanada Ten Braves. The movie isn't out until September so there will be a Twitter campaign over the summer and a collaboration with the huge Pasela Resorts entertainment chain offering themed food and drink. More details will be confirmed at a later date. 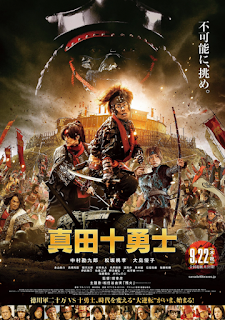 We've had replicas of swords based on those wielded by Masamune and Mitsunari, and now it's Yukimura's turn to have his distinctive spears show up as a prize in game centres across Japan. The replica 'Sanada Yukimura Juumonji Spears' will start appearing in participating amusement arcades from mid-August 2016. They're based on Yukimura's main weapon Shura ('Scarlet Carnage') and they're approximately 140cm long! 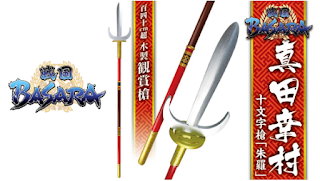 In addition, Capcom has announced that fourteen winners will be selected from a photo contest which asks participants to find a Sengoku Basara standee panel in one of seven locations, follow the Capcom Amusement, Chara Cap Official and Capcom Cafe accounts on Twitter, then Tweet a picture using the ＃幸村伝等身大パネル hashtag. The contest runs between 22nd July and 28th August 2016, and participants will be notified by DM if they've won one of the 'Sanada Yukimura Juumonji Spear' prizes.

A second competition is offering scratchcards for customers who visit one of 33 participating arcades across Japan. Spending more than ¥1,000 on tokens earns two scratchcards, while spending ¥500 on prize machines earns one. The scratchcards award prizes such as Twispa drink carbonation machines and umaibou snacks.

Yet another in-store preview event is announced, this time in Sendai

Fans in the Touhoku region aren't being left out in the recent batches of demonstration events as KobaP will be giving a presentation right in the heart of Sendai this coming Saturday (23rd July 2016). Attendees will have the chance to try the game out, and those who preorder while they're in the store will qualify for a special promotional poster.

Fans who try Sengoku Basara: Sanada Yukimura-den will be given some stickers to commemorate the occasion; the rewards are different for those who choose to try Monster Hunter Stories or BIOHAZARD 7 resident evil instead (hey, I have that notepad and pen set...)

The game's opening movie will be played in Japanese game stores from early August, and fans who visit the preview event may get a sneak peek.
at 2:45:00 pm