News roundup: Prepare for plenty of updates next week!

Given that KobaP suggested that the next batch of Sanada Yukimura-den news was due mid-month and we had nothing this week, I have a strong suspicion that there'll be a massive update in Thursday's Weekly Famitsu release. To give advance warning, I will just have finished a work all-nighter coupled with a long, long journey when the magazine comes out - but I very much intend to translate it as usual. Please forgive any lateness or errors.

Another big hint that next week is going to be important is that an hour-long broadcast has been scheduled for Thursday 19th May at 20:00 (Japan time). Described as the first of what will become monthly Sengoku Basara: Sanada Yukimura-den broadcasts, the stream will feature series producer Kobayashi 'KobaP' Hiroyuki and the game's producer Nonaka Daizou. Internet personality Shima will be present as a guest - he participated in last year's Nico Nico Relay event to promote Sengoku Basara 4 Sumeragi. Additional guests have yet to be announced, and the descriptions promise that the show will include the very latest, brand new information along with anecdotes from the development team.

The link to the Nico Nico Live stream is here, and timeshifts can be reserved already. 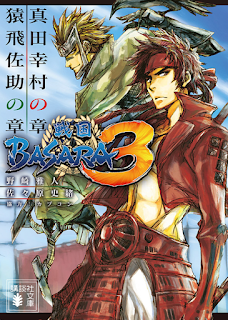 They've given it a different cover to tempt people like me into buying the same stories again... 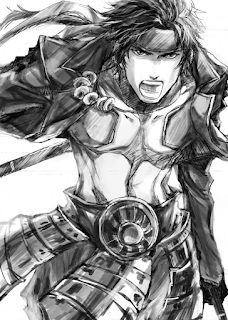 And either these are new illustrations, or they're from the Sasuke book which is the one volume I still haven't managed to pick up. Pretty sure they're new though. The artist is Tsutsumi Yoshisada as before. 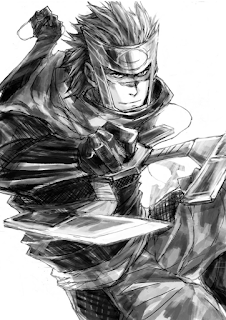 It looks as though Sengoku Basara 3: Date Masamune & Katakura Kojuurou No Shou will be following in June at ¥1,260 before tax.

Power up your smartphone with Sengoku Basara mobile batteries

Capcom have teamed up with Maxell to create a range of Sengoku Basara branded battery packs for smart phones, emblazoned with various characters from the series and scheduled for release this summer. Each battery pack costs ¥5,000 before tax and there are fifteen different designs - even if Masamune somehow gets to appear on four of them. 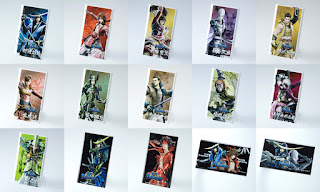 Sadly, the batteries are exclusive to the official e-Capcom store which means they can only be shipped to Japanese addresses, so if you do decide to purchase one make sure that your deputy service checks they can handle batteries. Some postal services refuse to carry them.

Heroic mascot Ashigaru-kun stars in an irreverent report about the Sengoku Basara: Sanada Yukimura-den x Sweets Paradise Sanada Cafe collaboration which is currently running in Shibuya. There will be another report soon with pictures of the desserts!

The Famitsu website posted a report from the Machi☆Asobi event a few days ago which summarised one of the key points which arose during KobaP's talk show about Sengoku Basara: Sanada Yukimura-den. For those who didn't see the flurry of tweets at the time, it's been stated that there will be no female characters in the game. This point apparently came up in response to fans asking about particular characters during a Q&A session rather than as part of the main presentation. KobaP blurted out that female characters wouldn't be appearing in accordance with documented history, then went on to apologetically suggest that fans should look forward to the masculine cast and their impassioned battles.

The news is obviously disappointing, especially as the girls of Sengoku Basara have often drawn the short straw when it comes to marketing and appearances throughout the history of the series despite being well-liked, beautiful and cool. KobaP has gone on record several times in the past to acknowledge the fans of the female characters, so this feels like a gigantic step backwards after seeing the efforts the team made to include the ladies in the stage plays, not to mention finally getting characters like Kasuga and Matsu polished up properly for Sengoku Basara 4 Sumeragi.

My personal view is that it's hard to judge the tone of what KobaP said from a handful of tweets and a write-up by a journalist, subsequently interpreted by a native English speaker across languages. I've read a huge number of KobaP interviews and heard him talk over the years, and I don't think he meant it anywhere close to as harshly as it can sound with a brusque translation. He's a fan of the female cast himself!

What seems most likely is that they've trimmed the cast list quite aggressively to keep this experimental spin-off relatively cheap and simple, and that's unfortunately meant that many of the established female fighters have been cut to make space for their more-famous male counterparts in order to maximise the series' ability to cross-promote with major regions and events. That doesn't make it suck any less, but it would have been a lot less shocking if the news had been broken gently instead of coming as a bolt from the blue.

I hope we get a more detailed interview soon so that KobaP (or the game's actual producer Nonaka) can explain the character selection process properly. Speculating about possible female characters for Yukimura to run into was fun, while it lasted, and having the chance swept away so abruptly has dampened my excitement a little. Of course, I'll still be buying Sanada Yukimura-den and enjoying it either way.

(Although the article doesn't mention much else - the Gyakuten Saiban 6 coverage rather dominates the discussion - I did like the note that Sanada Nobuyuki's outlandish hairdo evokes the image of a kabuki-style lion. I had missed that idea entirely before now; it's certainly appropriate for the 'Lion of Shinano'!)
at 11:18:00 pm