Speak your mind in the first Sengoku Basa-ranking!

Capcom want to hear our opinions about Sengoku Basara, and what better way to do so than by launching a new voting system as part of the anniversary celebrations? The first ranking asks fans to pick which of the series' box art illustrations they liked the most. A special lock screen picture will be created from the winning image as a reward.

To vote, visit the Basa-ranking page here before noon on 5th November 2015, click on the option you like best then select 'OK' in the confirmation box. That's all you need to do!

There will be a variety of new rankings coming up in the future, so it will be a good idea to keep an eye on the anniversary website.

Release information for the next of the Sengoku Basara anniversary books

The special anniversary book I mentioned previously is now available for order ahead of its release later this month. Sengoku Basara 10th Anniversary Eiyuu Taizen: Kiwami ('Hero Encyclopaedia: Extreme') will be released on 28th October 2015 priced at a slightly awkward ¥4,104. The price is likely to reflect its size; if it's as large as the 5th Anniversary version this is going to be one hefty book. 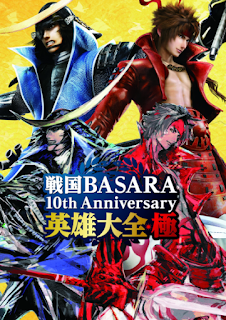 According to the shop listings, the book is slated to include artwork, CGs and design illustrations for all 49 of the series' main characters. There will also be an 'Azure-Crimson interview' with actors Nakai Kazuya (Date Masamune) and Hoshi Souichirou (Sanada Yukimura), comments on all of the characters written by KobaP and YamamotoD, congratulatory messages written by the cast, and of course the feedback from fans that Dengeki were asking about with the survey when the book was first announced.

We now have pictures of the unique merchandise that test-takers can obtain at the venue for the upcoming Sengoku Basara Qualification exam. As announced before there will be a choice of four acrylic key holders (¥1,000 each) and a set of two original clear files (¥1,000).

To keep it special, the merchandise uses the new illustration which was created exclusively for the event. Whether they buy the merchandise or not, all candidates will receive quirky Sengoku Basara blotting paper to commemorate the occasion.

It wouldn't be a Sengoku Basara news post without revealing some kind of new merchandise, and today's is a set of ten 44mm badges forming the Sengoku Basara Embroidered Badge Collection α for ¥8,000 before tax. The set is scheduled for release on 17th December 2015 with reservations opening two weeks from now. The actual box will include twenty badges in total. 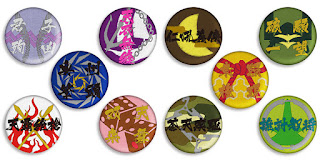 A sample shows how the badges will actually look with the embroidery stitching in place. Please note that this sample has a slightly different design to the Mitsunari badge shown above; they've simplified the design to make the writing more legible. 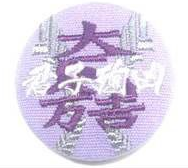 The official Sengoku Basara 4 Sumeragi website updated recently to add details of the big Densetsu No Sutadonya tie-in which is currently running in Japan. It was first revealed back during the anniversary broadcast but the prizes you could win for collecting stamps at the restaurant chain hadn't been shown, so here we go.

The annual Oni Kojuurou festival took place in Shiroishi last weekend, and this time we're lucky enough to be able to read an English-language photo report courtesy of tumblr user yamanoshiro! If you are interested in Japanese events (or Kojuurou) I recommend checking it out. One day, I'll be in Japan at the right time to attend... 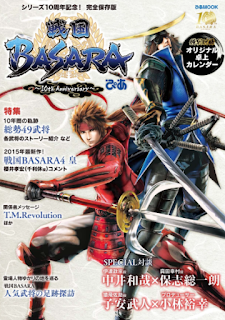 I received my copy of this mook today and gave it a quick read through before work. It's the size of a thick, full colour magazine - not bad for ¥1,296. The bonus calendar is constructed by popping out the individual pages and assembling them inside a flimsy cardboard frame.

The bulk of the book is dedicated to character profiles for all 49 of the major characters who have appeared over the history of the series. If you're one of the fans of the older, still-missing characters like Yoshimoto or Itsuki, you'll be pleased to know that they are given just as much attention as the main heroes. Each profile contains a picture (no new artwork), some simple statistics, historical information about the real people or theme that character is based upon and a random piece of trivia, which might be a gameplay tip, a fact about their design or a joke.

The main reason to buy Sengoku Basara Pia ~10th Anniversary~ is probably for the two special joint interviews with seiyuu Nakai Kazuya (Date Masamune), Hoshi Souichirou (Sanada Yukimura) and Koyasu Takehito (Sarutobi Sasuke), as well as series producer KobaP. The first of these (a joint interview with Nakai and Hoshi) is especially fun since it talks about their experiences as actors, and the two stars tease one another relentlessly every time they're together. The interviews are followed by very short messages from a variety of people who have worked on Sengoku Basara in its various forms, such as stage play actors Kubota Yuuki and Hosogai Kei and the staff who worked on the first anime adaptation.

There are also a bunch of rough sketches of Rikyuu dating back to the character design process which may be of interest to his fans if they passed on the Sengoku Basara 4 Sumeragi Official Complete Works book earlier in the year. Those who already own the Complete Works will notice a lot of material is duplicated throughout this volume.

In fact, the Complete Works books are what this release most resembles. This mook is almost like a low price 'best of' version of the existing Complete Works with its light summaries of releases, merchandise and events and a smattering of artwork from all of the previous games. It's not an essential addition to anyone's Sengoku Basara book collection, but if you want a reasonably priced, sturdy magazine to leaf through then it's a decent buy and it certainly does a good job of fitting with the anniversary theme. If you want something more comprehensive it might be a good idea to wait for the Sengoku Basara 10th Anniversary Eiyuu Taizen: Kiwami instead.

Sengoku Basara Pia ~10th Anniversary~ can be purchased from all good import stores such as Amazon Japan, CD Japan and Yesasia.

(I promise I will post a review of the last Sengoku Basara Magazine soon - I've been too busy lately to do much more than work on a few pages at a time but it's almost finished!)
at 8:10:00 am