I was holding out for the third round of guests for Sengoku Basara 10th Anniversary Matsuri ~Feast of Ten Years, Ten Shades~, which KobaP has been teasing will be announced soon. I bet they reveal them in the morning now I've finally gone ahead and written up this post, especially since the fan club website is due for an update later too.

Visiting Japan? Check out these historically-themed events with Yukimura and Motochika

The first of the two most recently-announced events is themed around Sanada Yukimura and based around Ueda in the Nagano area, where there are famous historical sites relating to the Sanada clan almost everywhere you go. It's a sightseeing stamp rally event which will take place between 31st October and 29th November 2015. Last year's campaign was called Shinshuu Ueda x Sengoku Basara Stamp Rally ~Part 1 - Battle of Ueda: The Tokugawa Army Repelled~ and this year's has a suitably splendid name as well.

Shinshuu Ueda x Sengoku Basara: Sanada Pilgrimage Stamp Rally ~Conquer The Famous Sanada Locations~ requires participants to pick up (or download) a stamp rally map which has blank spaces for six stamps, conveniently marked by Yukimura, Mitsunari, Sasuke, Tadakatsu, Ieyasu and Masamune from Sengoku Basara. Each stamp is located at an important local landmark in the Ueda area and there are helpful tips for navigating to each location on the sheet itself. Once the sheet is complete, it can be exchanged for an exclusive A2 poster between 10:00 and 16:30 on the second floor of the Ueda City Tourism Centre. Participation is completely free. 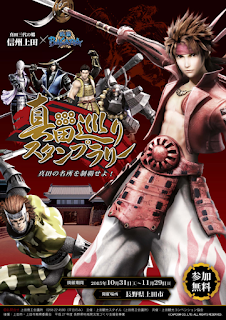 Furthermore, if you take the time to complete an incredibly short survey when you submit your map, you'll also receive an exclusive commemorative card as shown below. 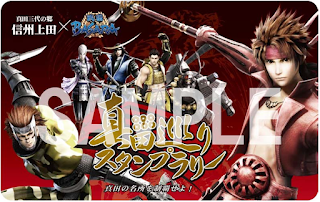 If you're more of an Aniki fan, the Chousokabe Motochika RALLY event is now in its fifth year and it will be running between 31st October 2015 and 31st January 2016. Visitors to Nankoku City (Kochi Prefecture) can pay ¥200 to participate in a 'quiz rally game' where they solve puzzles to uncover hidden checkpoints on a map, and it's all set against the backdrop of the real-life Chousokabe's birthplace. Participants will receive illustrated stickers and chances to win additional prizes as rewards for their hard work. 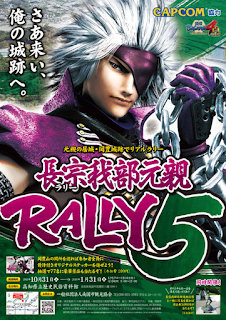 The Capcom Bar in Shinjuku has recently announced a major update to its menu, with a few items being discontinued and replaced by new versions starting from 2nd November 2015. They're also making it easier to drop in and try the bar out by relaxing the usual reservation system between 14:00 and 18:00 on weekdays. At the moment, you have to make a timed reservation which can be daunting if you're a foreign visitor without much knowledge of Japanese.

I thought it would be fun to take a look at the new Sengoku Basara goodies that they have on offer to commemorate this update. 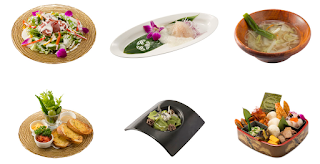 Then for drinks, there's Date Masamune -TESTAMENT- (¥680), Sanada Yukimura -Senryou Hanabi- (¥780), Ishida Mitsunari -Battougiri- (¥680), Sen No Rikyuu -Nodate- (¥450), Chousokabe Motochika -Sabaki- (¥780) and Tokugawa Ieyasu -Aoi No Kiwami- (¥680). I know that it's completely in character, but the Rikyuu drink really doesn't look all that interesting for a novelty item. It supposedly comes with a fan-shaped coaster to make things more fun. 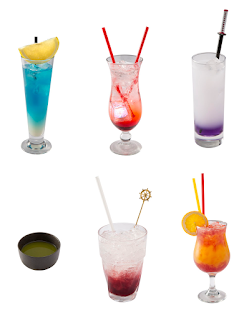 The popular Date Masamune akashiyaki and the recent Sakon/Katsuie dishes will remain on the menu after the update takes place.

Listings appear for the next batch of Sengoku Basara manga releases

These were revealed in the last volume of Sengoku Basara Magazine (which er, I still have to finish reviewing, don't I?) and now Manga Oh has provided a few additional details.

Tane Jugou's comical Wan-Nyan Sengoku Basara manga from Sengoku Basara Magazine will be collected into a single volume under ASCII Media Works' Dengeki Comic EX label. It will be available on 19th December 2015, which happens to be the same day that Sumeragi's Mame Sengoku Basara 4 volume 3 is scheduled for release.

In addition, the third (and final) volume of Yoshihara Motoki's Sengoku Basara 4 manga is coming out very soon too as previously announced, so there are quite a few books to collect this winter!
at 12:31:00 am