With the Golden Week holiday in Japan, official announcements have been scarce for the last few days. However, today was the first of the five big in-store demo events where Sengoku Basara 4 Sumeragi will be tested by members of the public across Japan. This one was in a TSUTAYA store in Sapporo; here's what people have been reporting so far.
KobaP has been posting snapshots on Twitter, too.

There's another demo event tomorrow in Nagoya, which is more centrally located meaning that there should be more reports with the possibility of official coverage from the various gaming news sites. It's likely the new videos will start appearing on the official Sengoku Basara 4 Sumeragi website at any time - possibly as early as Monday.

There doesn't seem to have been anything new revealed at last week's event so here are the summaries from Dengeki Online and Famitsu, for those who want to see pictures from the stage presentations and booths on offer. The only actual information reported seems to be:
Once again, KobaP has shared a bunch of photographs on his Twitter account.

AmiAmi are now accepting orders for the June Sengoku Basara 4 plushies: Tokugawa Ieyasu and Maeda Keiji. Those who have already been collecting the plushies know that they often sell out well ahead of their release (and sometimes within a matter of hours) so please don't delay if you want one of these two, just in case! 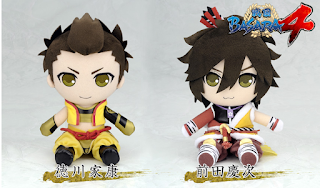 Both have already sold out at the official Gift online shop so distributors are the best chance of securing the plushies now.

The next issue of Sengoku Basara Magazine can now be preordered

Amazon Japan is listing the ninth issue of the official Sengoku Basara Magazine for 29th June 2015.

Sasuke will be featured on the cover, rubber strap and lead article this time and it will be Sakon and Katsuie on the bonus CD. There's also going to be a lot of Sengoku Basara 4 Sumeragi coverage so I can't wait to receive my copy!

Another set of listings which have recently appeared on AmiAmi is four acrylic mobile phone stands for Masamune, Yukimura, Ieyasu and Mitsunari. They're priced at ¥2,052 each and scheduled for release in mid-July 2015. This kind of stand is usually made from two flat slabs of acrylic plastic which can be slotted together and used to hold your phone; they're useful for watching videos when you don't want to hold the phone up and you can disassemble them for travel. But mostly, they just look cute. 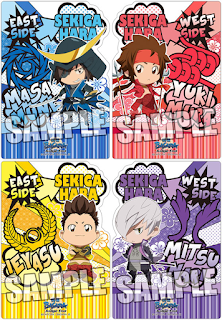 FUNimation start streaming Sengoku Basara Judge End outside the US

It's only the first two episodes so far, but I was pleased to see that FUNimation have opened up their YouTube stream of Sengoku Basara Judge End (Sengoku Basara - End of Judgement) for fans outside the US. The regions are limited to a scattering of illogically-selected countries so not everyone will be able to watch without using third party tools to avoid the region lock, but this is a great way to support the official release. FUNimation use streaming figures to decide which titles receive dubs, Blu-ray editions and special bonuses and the foreign distributors reuse FUNimation's materials; therefore the more people who can support the official streams the better the chance of a decent home video release later on.

A few of those regions were already able to watch the region-locked Viewster stream, but this is my first chance to see the official English subtitles!

More cast members are announced for the next stage play

Capcom have finally revealed the last two main cast members for the Butai Sengoku Basara VS Devil May Cry stage play, which was announced at the recent Nico Nico Choukaigi 2015 event. Lady will be played by Shiba Konona, while the role of Trish has gone to Shinato Ruri.

On the subject of the stage play series, Japanese fans were dismayed to learn that the Butai Sengoku Basara 4 DVD release is still uncertain. Amado sent Capcom a message to ask when it would be released only to receive a rather alarming response indicating that Capcom were also waiting to hear the same thing from their partners. It's been a long time since the official Dais shop went offline; I hope the Butai Sengoku Basara 4 play isn't lost forever.

Update on the Sumeragi ID situation

Capcom keep emphasising that the four special Sengoku Basara 4 Sumeragi early reservation exclusive weapons are not going to be made available for purchase at a later date, so I think it's a good idea to keep talking about them until the early reservation deadline passes.

Customers who placed their preorder through e-Capcom (or a deputy service which is buying from e-Capcom, or import specialists which are offering the towel bundles like Nippon Yasan and NCSX) should be able to claim their Sumeragi ID codes and register for the exclusive weapons the Tuesday after the order is placed with e-Capcom.

Customers who live in Japan or asked a relative to place the order in a shop there will receive the Sumeragi ID with their preorder receipt.

Everyone else has to wait until the shop they used sends out their batches of codes. Amazon Japan has been telling customers that they are sending all of the codes out together on 29th May 2015. HMV haven't given a date yet, but I can personally confirm they haven't sent out any codes so far. They're probably going to use the same schedule as Amazon Japan.

The most important thing is to ensure your deputy service or online store understands that you need the code before the registration deadline, so don't be afraid to ask them if it seems to be taking longer than expected. Good luck, everyone!
at 1:25:00 pm