I thought there would only be a couple of new details in the website update, but actually there's enough for another mini news post.

The biggest news is the full move list for Kyougoku Maria. I still don't know why Weekly Famitsu only printed a partial list; here are the missing details.

There's a little more information about Maria's Furukuru♪ ('Swinging Spin♪'), the short ranged move where she makes enemies twirl like spinning tops. It's capable of hitting many enemies at the same time.

Maria can also bind enemies with the cloth, putting them in a 'bound' state. Bound enemies cannot move from their position, and after a while they'll explode and hit nearby soldiers.

There are several moves which take advantage of this. Midarauchi♪ ('Indecent Strike♪') is where three pieces of cloth fly out simultaneously and put anyone they hit into this 'bound' state. It's ideal for attacking enemies at long range since it has more reach than Maria's regular attacks.

Then there's Amai Wana♪ ('Sweet Trap♪'), where four pieces of cloth appear in the ground in front of Maria and the enemies within that area become 'bound', unable to move for a short time and visibly distressed. This move can be used to set 'bound' enemies up in specific locations.

Maria freely plays around on the battlefield, toying with her opponents as much as she likes. Iro Nawatobi♪ ('Sexy Skipping Rope♪') is a move where she dashes forwards using her cloth as a skipping rope, defeating any enemies who get caught up in her path.

Main Story: While Maria cavorts around as she pleases, making enemies across the land, she pulls her brother Nagamasa and his wife Oichi into the struggle for Hinomoto. What could her most capricious plan be...?

Drama Route Story: Maria leaves Nagamasa and Oichi to go in search of a worthy marriage partner for herself. The self-indulgent hunt for a bridegroom begins. But in the end, the bridegroom Maria finds is really...?

The Sengoku Basara 4 Sumeragi soundtrack is on the way

The other big announcement today was that the Sengoku Basara 4 Sumeragi Original Soundtracks (sic) will be released on 29th July 2015, priced at ¥3,200 before tax. It will contain one CD with 26 tracks including Sen No Rikyuu's theme. First press copies will include a sticker of Rikyuu. 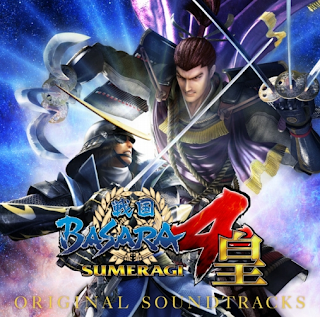 Incidentally, fans of Ishikawa Chiaki's ending theme Heavenly Blue can pick it up on her next album, Monogatari No Saisho To Saigo Ha Iranai. It's scheduled for release on 16th September 2015 and will include a DVD with videos of two live song performances.

T.M.Revolution's opening theme DOUBLE-DEAL is already available on his album TEN ('HEAVEN') which can be purchased worldwide on CD or through digital media outlets such as iTunes.
at 11:42:00 am