It's still a month away, but could this be the first sign that the promotion for the game is beginning outside of dedicated Sengoku Basara events?

April will also feature six fan club events spread across three consecutive Saturdays. I posted the details back when they were first announced but the fan club website updated this week to confirm that exclusive merchandise will be available for attendees, too. 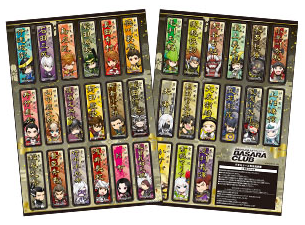 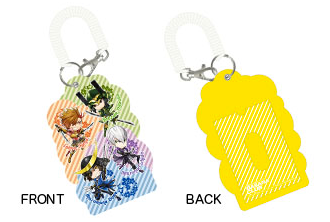 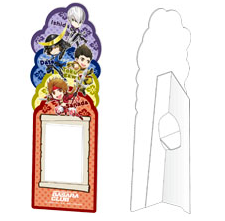 A tenth anniversary shopping bag for ¥700: 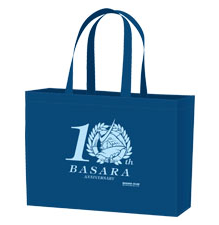 Sixteen different 'favourite warrior' badges for ¥900 each. The selection of designs has been changed:

Ten event-exclusive 'Basaragacha' pins for ¥400 each:

A selection of six different mini cushions for ¥2,200 each. These will be available in extremely limited quantities:

A stationery set comprising two mini-notelets, two sheets of stickers and a pair of clear files for ¥1,400:

The stationery set and towels are already available from the official fan club shop online. For the rest, leftover stock will probably appear in the shop shortly after the event except where they've specifically indicated that an item is event-exclusive.

Celebrate the life of Sanada Yukimura with a Sengoku Basara collaboration

Yukimura is the star of yet another Osaka-based historical exhibition next month as the Sengoku Warrior Chronicle Fair Chapter 1 "The Mystery of Sanada Yukimura" exhibition runs in Namba Marui between the 3rd and 26th of April 2015. Capcom are supporting the event with a Sengoku Basara 4 Sumeragi booth which will play the game's promotional video for the crowds and offer merchandise and photo spots. I wonder whether the series' cute Yukimura-kun mascot character will also make an appearance? He's shown up in Osaka a few times now.

The previous tie-in last summer must have been a success since the folks at Sumzap have partnered up with Capcom once again for a second Sengoku Enbu -Kizna- x Sengoku Basara 4 collaboration event! It was titled Sengoku Basara 4 Kensen Ranbu and it ran from 9th March until 18th March 2015. Those who don't play the game can get an idea of what's involved in this event report from Inside Games. Samples of the previous in-game collaboration cards can be viewed here.

The listings for the mysterious upcoming book Sengoku Basara Art Works were recently updated to give it a fascinating new title: Sengoku Basara Seishi ("The Official History of Sengoku Basara"). Still scheduled for release on 15th April 2015, the description has now completely changed to explain that it's a book which delves into the actual history behind the game. Topics it will cover include comparing the real historical figures with the in-game versions, events such as the Battle of Sekigahara and actual military tactics. An art book would have been nice but this sounds quite interesting too!

Fans of T.M.Revolution can get an early start on the Sengoku Basara 4 Sumeragi content when his latest album, Ten ("Heaven") goes on sale on 13th May 2015. It will mark the anniversary of his debut nineteen years ago. The game's theme song, DOUBLE-DEAL, is planned for inclusion on the album as one of the brand new tracks, and two special CD+DVD editions of the album will each include different live footage from T.M.Revolution concerts last year.

The CD is available for preorder at all good import stores and it's very likely that the song will be put up on iTunes internationally, since Nishikawa is well aware of his non-Japanese fans.

While researching this post, I also discovered that there's a remix called Count ZERO (Re:boot) on last year's Phantom Pain EP. You can hear samples of it via iTunes or Amazon Japan. It's probably old news to big T.M.Revolution fans but I thought it was neat!
at 11:03:00 am