As many people will already have seen, the official Sengoku Basara 4 Sumeragi website is now live and there are a few new pictures to be found!

I've made a few notes since it's fun to chronicle the flow of information.

A new Gakuen Basara manga anthology is on the way

I was checking Manga-Oh earlier and stumbled upon some great news: there's a brand new listing for a Sengoku Basara Series Official Anthology Comic: Gakuen Basara: Gakusai Rantou-hen ('School Festival Brawl') - in other words, Gakuen Basara 8! It's scheduled for release on 27th March 2015 under the Dengeki Comics EX label. No further details are available yet.

The next Basara Magazine CD will be released soon

Seiyuu Okiayu Ryoutarou (Toyotomi Hideyoshi) will join Ishino Ryuuzou (Chousokabe Motochika) and Nakahara Shigeru (Mouri Motonari) on one of the bonus tracks to make things even crazier. The 'Basara Challenge' skits are about looking after children, an interrogation and a brand new episode: television shopping. What on earth would an infomercial hosted by Motochika and Motonari be like...?

Listings are already available on Amazon Japan and AmiAmi. 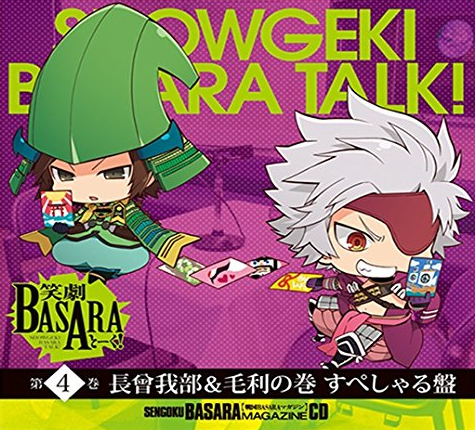 The description warns that the jacket artwork is a placeholder but I think it's likely to stay since it matches the others in the series.
at 11:30:00 pm