Yesterday was another day of deliveries. At the top of the picture are the second and third volumes of Dot Kareshi -We're 8bit Lovers!- and an overpriced copy of Black Wolves Saga -Bloody Nightmare-. I'm making up for lost time and playing all of the PC games I've missed over the last few years. The sole audio CD is Tadaima by Kurahashi Yoeko. A small pile of doujinshi from the recent Super Comic City event arrived too and was omitted from the picture. 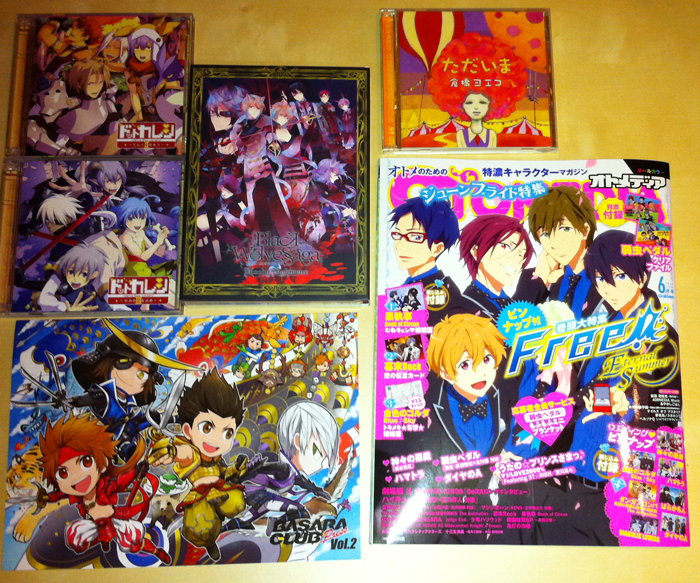 I couldn't afford to buy all five mainstream anime magazines which contain Sengoku Basara: Judge End content this month so I settled for the June issue of Otomedia. Sengoku Basara: Judge End received a two-page spread to highlight last week's news. I'm not going to make a habit of publishing content from inside magazines but here's a terrible phone snapshot as a sample. 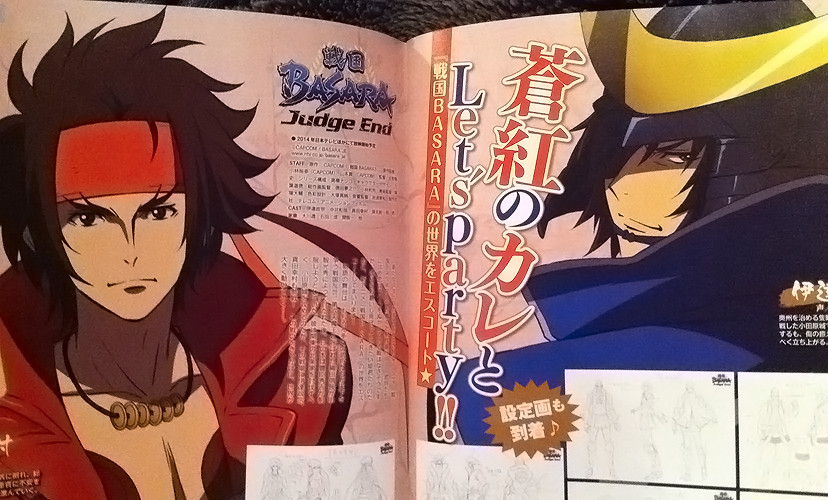 Most of the information was the same as on the official website aside from a very short Q&A with Itou Kouhei, one of Telecom Animation Film's producers and the same person who left a comment in last month's PASH! magazine.

Q. What's the appeal of this anime project?
A. I think that this is an anime which interprets the Sengoku Basara 3 source material from a new perspective. The story incorporates a large number of original elements.

Q. Other than the four characters that have already been revealed, please tell us whether the 'key characters' who featured in the original game will remain.
A. Date Masamune, Sanada Yukimura, Tokugawa Ieyasu, Ishida Mitsunari; while it was inevitable that these four would appear, the unique individuals who stand firmly by their sides all have roles to play too. I think of all of them as having become 'key characters'. One of the attractions is seeing how they'll feature, and in which scenes.

Q. What will you do about fans who already have their own impressions of Date Masamune and Sanada Yukimura?
A. That's a tough question... But I think that even these guys (Masamune and Yukimura) must have sides to them we don't know about. There could be some completely unexpected, unbelievable surprises. While it's unfortunate that I can't say any more about this, I think that we've taken care to look after the mental image that everyone has of each character.

Apologies for my shabby late night translation. Hmm, Itou-san always makes a point of listing Mitsunari last and the key artwork seems to set him aside from the other three as well. I'm really feeling as though he'll be positioned as the main 'villain' this time for most of the show. It's interesting that the female-orientated Otomedia coverage really isn't hiding its bias towards Masamune and Yukimura.

Finally, the second volume of the Basara Club newsletter arrived this morning too for a double-dose of Sengoku Basara excitement! It revealed that there's going to be more club-exclusive merchandise very soon to hurt my wallet. Since everyone loves rankings, here are some of the fan club's favourite things...

1. Ishida Mitsunari
2. Date Masamune
3. Mouri Motonari (all of the reasons people gave were full of mirth)