This post refers back to my previous mini-review of the first title in the 'bee game' series, Jooubachi No Oubou: Menou-hen. There will be spoilers for both games as well as remarks about the games' adult content. Please don't read any further if you're uncomfortable with that. 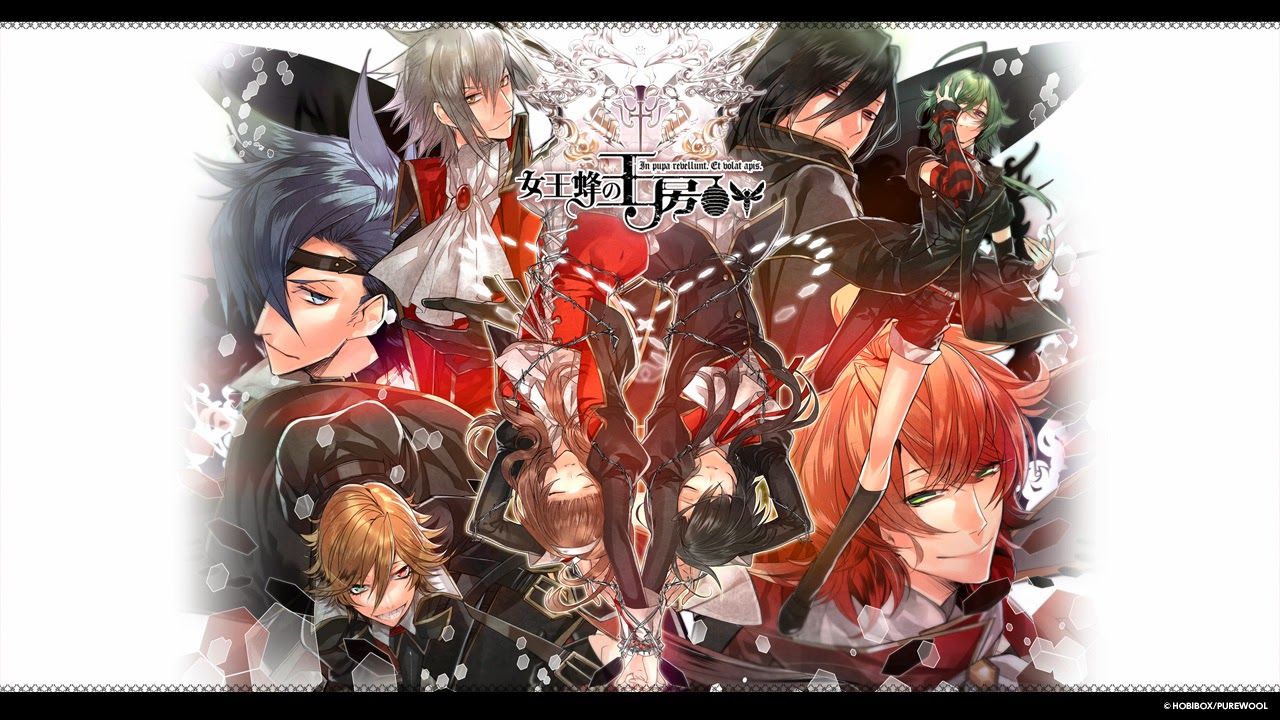 Jooubachi No Oubou: Kaguya-hen is the second half of the Jooubachi No Oubou story. While Menou was raised in her hive as a princess, her sister Kaguya was cast out and left for dead by those she trusted most. This is the story of Kaguya's struggle to reclaim her birthright no matter how many setbacks she has to face along the way.

First and foremost, I should warn that the game is full of adult content and a considerable number of distressing situations. Sensitive gamers are advised to avoid the series entirely; Kaguya's game is noticeably worse than Menou's and there's a great deal of gore on top of the usual abusive undertones. I can't even begin to list the unpleasant themes which crop up this time around. The official website has demos and sample artwork to give gamers an idea of what to expect.

In spite of this I am pleased to say that I enjoyed Kaguya-hen much more than its predecessor and I'm really glad I picked it up. It's a far better game than Menou-hen was - though as it builds on the established plot and character relationships it probably doesn't work as well unless you play both of them in order. The plot twists this time seemed less ridiculous after having experienced the first half of the story. 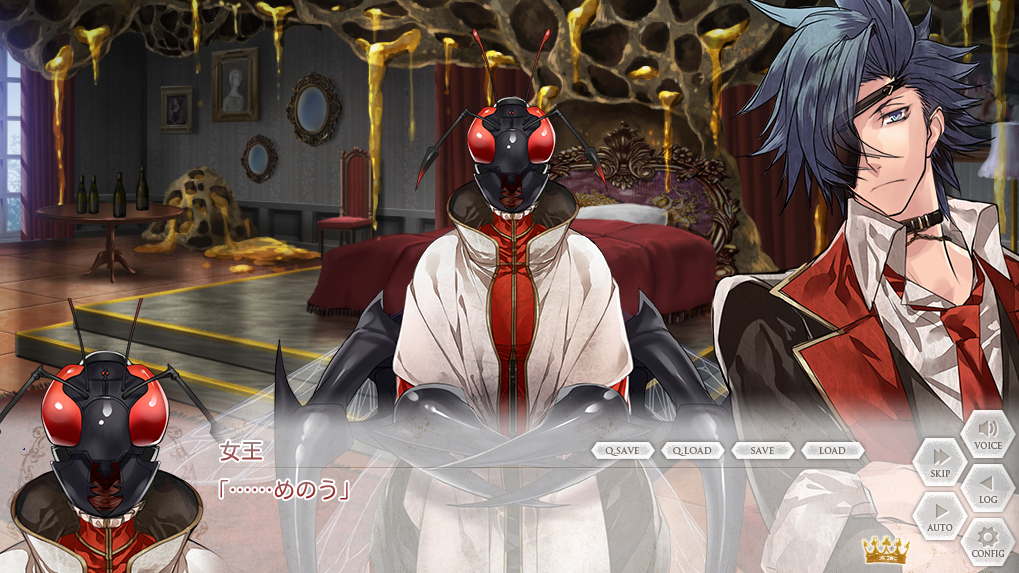 Still, the main reason that Kaguya-hen is better than the earlier game is Kaguya herself. She's an amazing, courageous heroine; a rarity in the otome game world where submissive main characters tend to be popular. Kaguya is beautiful, intelligent, brave and unafraid to get her hands dirty; while Menou forced her suitors to be pacifists, Kaguya kills and orders others to kill whenever necessary. The bee world is a terrible place, so being able to control a protagonist who recognises this and does what is required is very satisfying. Menou's gentle personality could be frustrating at times.

The plot is also more pressing as we learn that Kaguya is actually working under a time limit to take control of the hive - she doesn't have the luxury of wasting time worrying about whether humans and bees can come to a mutual understanding one day. From her internal monologues, we learn that she's still bearing deep emotional scars from her mistreatment after being thrown out of her home. This trauma continues to eat away at her self-esteem and makes the harsh decisions that she has to make even crueller.

Because Kaguya is such a strong lead it's inevitable that she has to be paired with an even stronger villain to make her struggle more difficult and the staff really outdid themselves. Menou had to face different opponents depending on her decisions; here, the main antagonist for most of this game is one of Kaguya's three drones. Even though he's ostensibly working at her side to help her become queen, Sumeragi is a horrible, manipulative guy with a beautiful face and a heart as black as night. Kaguya is fully aware that he's using her and the pair of them trade insults every time they speak, yet they both need one another to reach their goals. The strange bond they share is fascinating.

Sumeragi himself is incredible. I can't remember the last time that a game character actually scared me but Sumeragi's gloriously sadistic voice and omnipresent smirk made me feel very uncomfortable. At the same time, I actually like Sumeragi much more than Hakuou and Takanemaru from Menou-hen. They were both attractive guys who hid horrible secrets and abusive tendencies beneath a kind veneer; in contrast, Sumeragi is openly cruel and he doesn't care who knows it. It's obvious he has his share of nasty secrets right from the beginning - and it's fun to let myself be frightened of him from a safe distance. 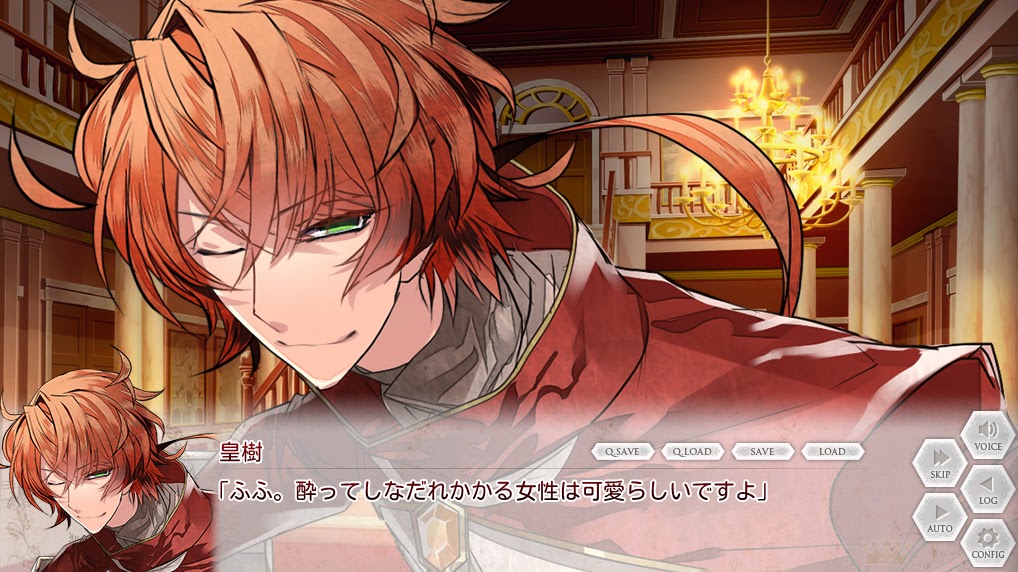 It could be argued that Sumeragi's awfulness is necessary to give Kaguya someone to hate and prevent her from sinking into despair (as she very nearly does on several occasions). In a twisted way she needs him to be the way that he is, even though he turns her life into a living hell. Since the other two drones are kinder the storyline requires that Sumeragi keeps showing up to manipulate people; if you don't like him you'll find Kaguya-hen very frustrating as his insincere smile is rarely far away.

I absolutely loved Sumeragi from start to finish. He relishes his own nastiness to such an extent that my initial fear gradually transformed into a weird kind of admiration. I hate him, and I adore him at the same time. One of the most satisfying moments in the game was a bad ending where Kaguya battered him to a well-deserved bloody death. It's unusual to have a game with a love interest that the player also wants to see die.

Sumeragi's route takes a strange turn at the end (even more so in the alternate version, unlocked after collecting the other nineteen endings in the game). He suddenly declares his love for the heroine after she endures the worst of his abuse and starts to reveal his strangest secrets - the game's writers seemed unwilling to let Kaguya's journey end sensibly without throwing in some bizarre backstory as an afterthought. The silliness slightly dampened my enthusiasm but it wasn't as bad as I'd been dreading after what happened in the first game, so I was actually relieved that Sumeragi wasn't Menou's long-lost secret clone brother as I'd been dreading (after my imagination had been running wild, finding out that he was actually a monstrous human-bee chimera was a relief in comparison).

Sumeragi isn't the only drone in Kaguya's story, of course. The other two are very different, though that doesn't mean that liking them is any less complicated. 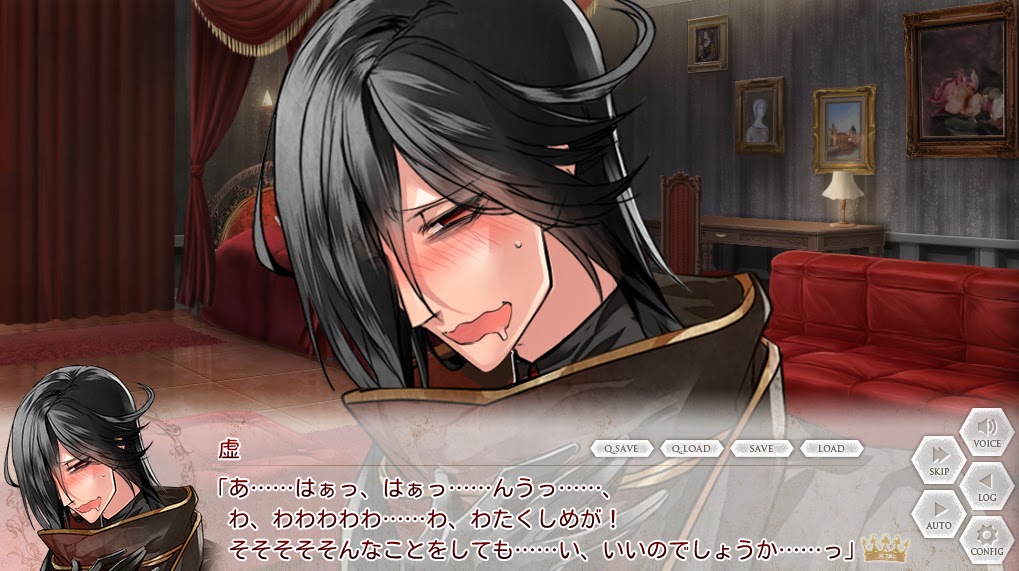 The second of Kaguya's potential love interests is Utsuro, a slow-witted, lanky drone who stammers and throws himself to the ground on a regular basis. Utsuro is considered disgusting because of his ability to control insects, and as a result he's grown up to be a timid person who everyone uses as a convenient punching bag. This seems especially harsh in the bee universe where the insects he manipulates are extremely useful, capable of spying, assassination and healing fatal-looking wounds.

Utsuro is an unusual type of otome game character as the protagonist is the one in control of their relationship, forcing him to do unpleasant things at her beck and call. Women who are tired of the typically overpowering male love interests will probably find his route extremely interesting; indeed, it was seeing a picture of Kaguya dominating Utsuro which first brought the series to my attention. In practice the experience was more harrowing than I expected with Kaguya often irritated by Utsuro's lack of confidence; what had originally seemed like a cute masochistic kink often turned into full blown cruelty. Much of the abuse Kaguya hands out to him appears to stem from her frustration at being bullied by Sumeragi. Dwelling upon this makes Utsuro's route seem even sadder; still, he's a sweetie and if you can sit through the difficult scenes where he's made to suffer it eventually pays off with the cutest - and happiest - ending in the entire series. 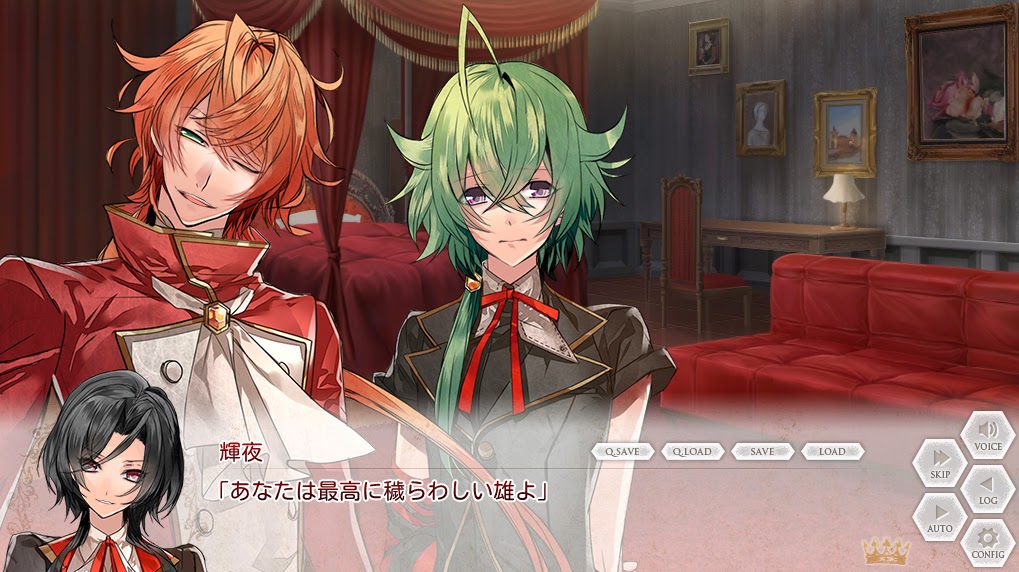 The third and final drone is Rin, the youngest-looking of the trio. His lovely voice notwithstanding, Rin wasn't my type from the beginning and I didn't feel any more affection towards him after completing his angsty story. Compared to the others he had a large amount of decent-looking illustrations - but then he made the grave mistake of attacking my favourite character. I'm not sure that I can ever forgive him.

Like Utsuro, Rin is a kind, self-sacrificing person at heart who keeps trying to do the best for Kaguya. Unlike Utsuro, he has a maddening tendency to try to hide things and and be annoying in order to protect his princess. I can't stand this kind of behaviour at all. Hunting for all of Rin's alternate endings was the most tedious part of my quest for 100% completion.

Speaking of overprotective guys, one twist in Kaguya-hen is that you can interact more with Menou's three drones and talk to them properly without chivalry getting in the way. It's so nice to be able to speak to Hakuou and not have him hide important plot points to protect you; I finally began to appreciate him a little more after getting to know him from another perspective. Being threatened by Ruby has its own charm, too. 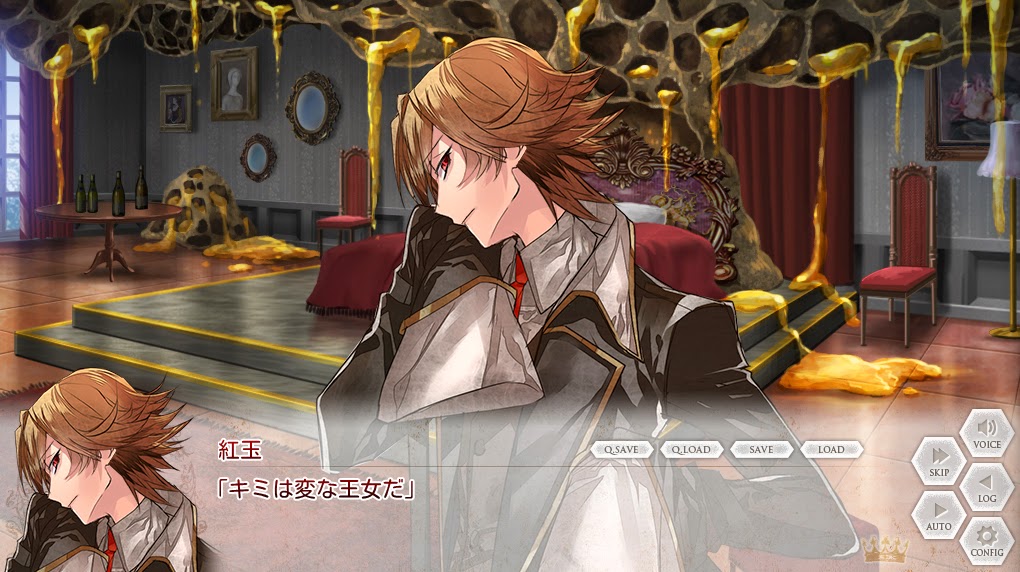 Ultimately, none of the relationships in the Jooubachi No Oubou games are presented as being equal or healthy (Ruby and Utsuro came closest at times). This is a dreadful series full of cruelty and pain. Yet while it's nowhere near as well-written, there are occasional moments which remind me of the strange social dynamics in Yoshinaga Fumi's superb Oooku manga. The male bees tend to be bigger, stronger and more world-wise than the two princesses but the hive will only choose a female as its queen, so the drones have to resort to cunning manipulation if they want to seize power themselves.

The guys in Jooubachi No Oubou all have a dark side that the heroine has to get used to, and Kaguya's are quirkier than Menou's right from the beginning. It's interesting how vastly my opinion of the male characters changed over the course of the game. At the start, based on the promotional material and how they appeared in Menou's demo, my preferences were as follows.

After playing both games, there were some major changes based on the revelations I'd experienced. Hakuou was dead last after Menou-hen but recovered considerable ground after the revelations in Kaguya-hen made more sense of his character:

I am probably evil for liking Sumeragi more than Utsuro - and it's potentially worrying that I can apparently forgive cannibalism, mutilation, bullying and murder much more readily than betrayal of trust and overprotectiveness.

While the drones weren't good people, interacting with Ruby, Utsuro and Sumeragi was fun and that's all I ask for in a game. 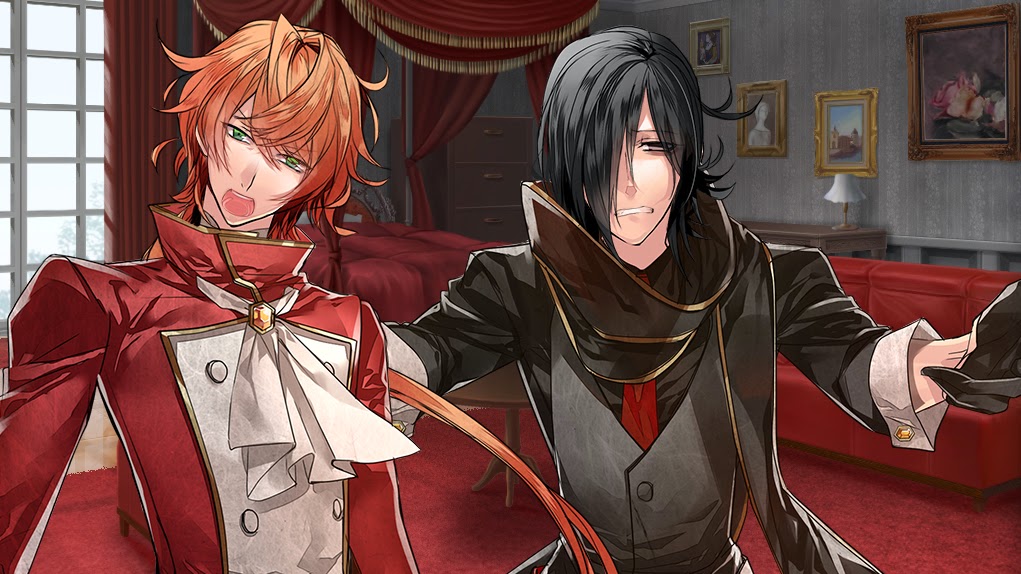 So, that's the end of the Jooubachi series for me aside from the remaining situation CDs and the short story which will be sent to buyers of both games in a few months. I'm glad that I played it; while it was sick, twisted and unpleasant, the incredible seiyuu and beautiful designs made it worth the time spent.

I'm going to spend my time enjoying a happier game next!