News roundup: Sengoku Basara Judge End is back on the air tomorrow

The Judge End news is at the end of this post so that I can hide the (very minor) spoilers from the main page of the blog.

Capcom have announced that they'll be holding a 40-minute Sengoku Basara panel with creators Kobayashi 'KobaP' Hiroyuki and Yamamoto 'YamamotoD' Makoto at Tokyo Game Show on Saturday 20th September 2014 at 15:00 Japan time. They're asking fans to submit questions on Twitter and their website until the 16th of the month. Some of the fans who participate in the social media activity throughout September will be selected to win Capcom-related prizes as shown on the website - please note that the prizes will usually only be shipped to Japanese addresses even though anyone can go ahead and submit a question.

Personally, I think that the staff are likely to give a separate presentation for the media on the 18th or 19th September with details of upcoming merchandise and events. While this is just my speculation, we're long overdue for a proper Basara Matsuri event announcement and they don't usually circulate the details of their press events to the general public in advance. Whether they're going to announce a new game of some kind is anyone's guess given how unpredictable these things have been historically, but it seems likely we'll get some kind of news about the series on top of the public Q&A session. I'm looking forward to it.

Capcom teams up with the Inazuma Rock Festival

T.M.Revolution's Nishikawa Takanori regularly participates in a music event called the Inazuma Rock Fes in Shiga Prefecture and this year, for the first time he'll be getting some extra support from 'Masamune-kun' and 'Yukimura-kun', a pair of mascot characters based on the Sengoku Basara series. The Sengoku Basara songs are often performed at the event so the collaboration makes a little sense.

The press release explains that the mascots will be appearing as dancers alongside the event's mascot character Tabo-kun (a caricature of Nishikawa himself) and his band formed of fellow mascots Inappii (the mascot of Inazawa City in Aichi) and Wataru (representing the bridge between Honshuu and Shikoku). Their performance will be on the Ryuujin stage on 13th September 2014 between 15:50 and 16:10. KobaP tweeted to say he was going to show up too. 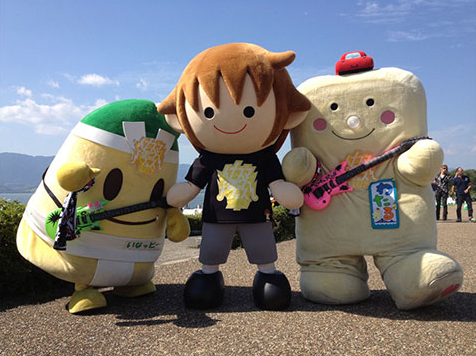 Sadly there are no pictures showing what the Sengoku Basara mascots will look like, yet. I'm hoping they'll be similar to Jumbo Xavi-kun!

Lollipops printed with pictures of the series' four leads, priced at ¥400 and due for release in September 2014. 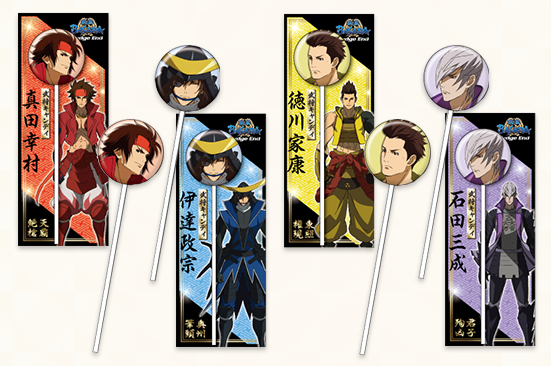 A ¥350 clear file, released in September. There's also a magnet with the same illustration, priced at ¥400 and due in late October 2014. 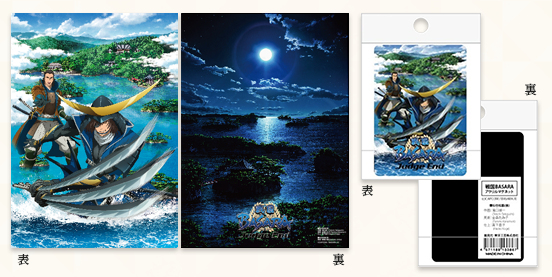 The magnet and clear file are limited to Miyagi Prefecture and they're decorated with a brand new illustration. The picture shows Masamune and Kojuurou in front of the scenery of Matsushima, one of the parts of Japan most celebrated for its natural beauty. Matsushima has very strong links to the real Date Masamune so this is an appropriate tie-in; I'm glad that the series' tradition of creating promotional illustrations for local areas has continued after the switch in animation studios.

Amazon Japan has an exclusive oversized Yukimura badge on offer for customers who purchase Sengoku Basara Judge End on DVD or Blu-ray, and it recently added a preview picture to the listings. 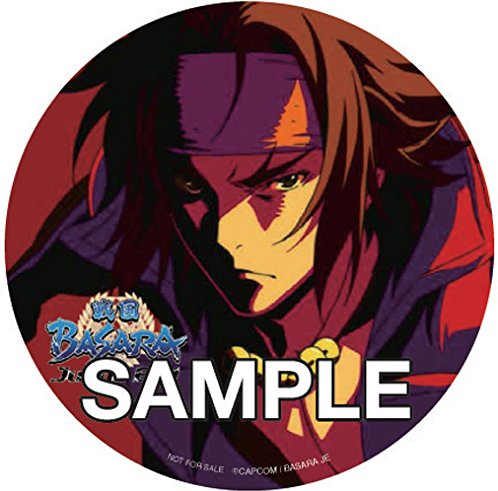 Now I'm even more certain that the three remaining volumes will come with additional exclusive badges.

Just in case last week's break in the schedule was enough to make people forget about Sengoku Basara Judge End, Animate TV have posted their usual preview gallery for tomorrow's episode. I don't believe we ever had a summary for episode nine before so here's the vague description promised by the article:

A great fissure was created in Sekigahara, in the place where Tokugawa Ieyasu and Ishida Mitsunari once fought, and as time passed that crack came to symbolise the two halves of the land of Hinomoto. The pair's promised place is now the site of the battle upon which everything is at stake. To be able to carve out a life he can call his own; to do battle with his destined rival; for the sake of revenge or to create a world of bonds... Everyone involved faces a decisive battle, so that each of them can move forwards in their own way.
at 3:33:00 pm