News roundup: We can expect a lot of news this week; here's what's been announced so far

There will be another batch of Sengoku Basara: Sanada Yukimura-den news this week

The preview bulletin for Weekly Famitsu magazine confirms that this Thursday's issue will include another article about the upcoming game. We can expect new details about chapter eight, which is confirmed to be the Osaka Winter Siege, and the secret backstory chapters related to it. We'll find out more about the 'Sanadamaru' fortress and its incredible destructive power, and Sarutobi Sasuke will also be involved. Finally, we're promised additional DLC information.

PSN preorders are coming (or already here, if you can read Chinese)

The Chinese version of Sengoku Basara: Sanada Yukimura-den is already available for preorder from the Asian PlayStation Stores. It's RM190 in the Malaysian store and HK$368 in Hong Kong. Preloading will commence up to two days before the release date on 25th August 2016. Customers who preorder will receive a PS4 custom theme and the 'White Cross' preorder-exclusive costume for Yukimura. 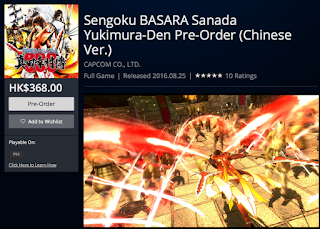 I expect to see the Japanese version appearing on the store later this week combined with press releases from various gaming websites.

Capcom's marketing team have been ensuring the game pops up in all kinds of unexpected places lately, from a feature about what modern businessmen can learn from the Sanada clan on Lifehacker Japan to a candid article about what makes the Sanada men so popular with women on Rocket News.

It's been reported that a 15-minute PS3 trial version of the game will be included in the newest batch of PlayStation Plus benefits from 3rd August until 6th September 2016. The trial will apparently run from the game's release date through to 6th December 2016. I was a lot more excited about it until I clicked the link and read all of those extra details...

Based in Japan? Capcom is looking for a small group of reviewers to test the game

As with Sengoku Basara 4 Sumeragi, Capcom has posted an offer for fan reviewers. From all of those who sign up before 8th August 2016, thirty people will be selected to receive an advance copy of Sengoku Basara: Sanada Yukimura-den on the understanding that they'll test it ahead of the release date and send their detailed impressions back to Capcom. The three best feedback reports will earn the reviewers a mention on My Capcom and priority for future review campaigns.

(Bend the rules and pick me, Capcom, pick me! I wish I could participate, hahaha.) 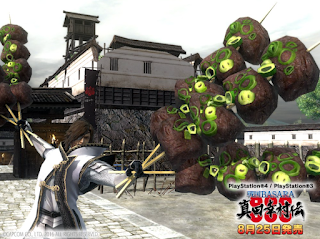 And more recently, Nobuyuki's special weapon Doyou No Ushi was shown. It's shaped like grilled eel because in the real world, it's auspicious to eat eel on the day of the ox, Doyou No Ushi. 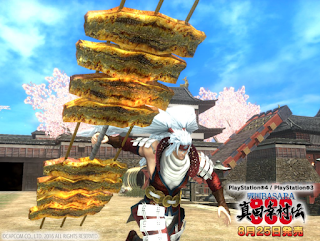 A store-exclusive Sanada Yukimura-den fan and towel is announced

Used book specialist Furuhon Ichiba will be making some additional merchandise available alongside Sengoku Basara: Sanada Yukimura-den when it's released in a few weeks. 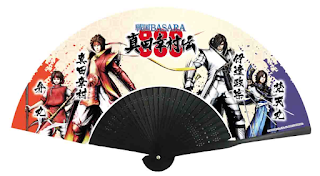 The exclusive Sanada Yukimura-den cotton towel is illustrated with a sumi-e effect. It will also cost ¥1,080:

The coloured version of the cover illustration for the new DJCD: Sengoku Basara -Nekketsu! Yose Raji- release I mentioned previously has now been added to various shop listings. It's certainly cute! 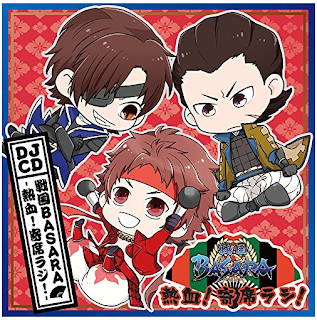 The latest chapter of Sengoku Basara: DOKUGAN led to a few tweets which revealed that the Uesugi clan made their post-apocalyptic fantasy debut in chapter seven of the crazy new manga. Even more interestingly, the artist chose to depict Kenshin without any headwear (and actually using kanji). I can't wait to pick the manga up in due course and find out exactly what's been going on.

Visitors to the Capcom Bar in Tokyo will be able to enjoy a Yukimura-themed menu until 10th August 2016! If you've ever wanted to have an entire meal made of nothing but Yukimura-related food items, this could be your best chance. 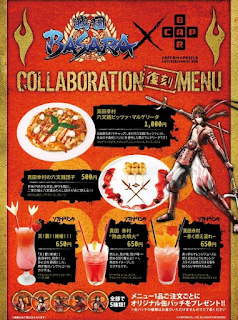 (I'm kidding, there's tons of Yukimura-related food in Japan. Though not much of it gives you Sengoku Basara badges for each item you order!)

Learn more about the new game with Capcom TV's Gor☆geous

The first episode of a new web series featuring Capcom TV's space pirate Gor☆geous was posted recently. The purpose of the show is for the presenter to learn about Sengoku Basara: Sanada Yukimura-den and share his discoveries with viewers. The first episode is about Gor☆geous being approached by NonakaP out of the blue and being dragged off to try the game out. He's made to play through the first ten Sanada Trials missions as Yukimura under the producer's watchful eye as a challenge - and fails.

Speaking of Capcom TV, the next episode (3rd August 2016 at 20:00 Japan time) will be including more footage from Sengoku Basara: Sanada Yukimura-den. They plan to feature the 'Sanada Blood' character-swapping mechanic and show Katsuie's secret backstory chapter from the main story.

Series director Yamamoto Makoto has suddenly burst back onto the scene in a big way after being absent for a while, and he's the face of a new series of behind-the-scenes documentaries titled The Action Of Sanada Yukimura-den. YamamotoD is accompanied by motion capture actor Koga Wataru, and the two of them discuss the challenges of creating the game's outlandish moves with human actors. Koga is a veteran, having collaborated on the series with YamamotoD ever since Sengoku Basara 2 Eiyuu Gaiden (HEROES).

There's an interview page to go with the videos here - you can scroll through the videos with the left/right arrows to see some more pictures. Text is available for seven clips even though only three have been posted so far, so I guess we can expect accompanying videos about Nobuyuki, Masayuki, Benmaru and Bontenmaru before too long.

Here are a few miscellaneous notes I jotted down:
The first clip is a general overview of how they create the motion capture and moves for the game.


There are some production sketches detailing Yukimura's new moves on screen at one point, and they confirm that in the story he'll be using the Hinokaku ('Scarlet Horns') outfit for chapters two through to seven, the Kurenai ('Crimson') outfit for chapters eight and nine, and the flashy Fushichou ('Phoenix') outfit for chapter ten along with the avant-title and ending sequences. So Yukimura will have the three costumes we've already seen as his standard outfits. The video also shows that the controls are similar to previous games as expected (e.g. Basara moves triggered with Circle).

There are also clips dedicated to creating the look and moves of Sanada Yukimura (Sugihara Akira), who does an admirable job of attempting all of those aerial moves without actually being able to fly like Yukimura:


As well as Date Masamune (Tanaka Hiroto), who had the challenge of manipulating all of those swords for the motion capture sessions:


This is a rare opportunity to see behind-the-scenes content from the Sengoku Basara games!

I'll be posting after Capcom TV and Weekly Famitsu reveal the latest tidbits tomorrow at some point. And at some point, I'll catch up on all of the comments! Sorry for the delay!
at 1:19:00 am