It's taken me longer than I'd like to post this due to real life commitments, but here's a round-up of what I've seen fans who were lucky enough to be able to attend the event talking about on social media this weekend. My current sources are fan reports and the media articles from 4Gamer, Famitsu, Gamer, Dengeki and WWS Channel.

There aren't many pictures available yet, though I enjoyed this blog entry from singer Akita Chisato which shows her posing with some of the other performers (and KobaP) wearing a stage outfit which resembles Maria's clothing. Akita sings the vocal version of Maria's theme.

Anyway, I should focus on the news - not there's very much.

First and foremost, it's been officially confirmed that the next major announcement about the new characters for Sengoku Basara: Sanada Yukimura-den will take place in April 2016. Several of the attendees speculated about whether there were going to be more newcomers than the already-announced Sanada Masayuki and Sanada Nobuyuki, Yukimura's father and elder brother. Personally, if there are additional characters I strongly suspect they'll be unplayable for now to keep the focus on the Sanada family.

Speaking of the mysterious newcomers, several people were excited to hear Yukimura calling his father 'oyaji-sama' and his brother 'aniue' (a somewhat formal way to say 'older brother'). A lot of people were surprised about the first of those word choices. One fan theorised that Nobuyuki might use 'chichiue' (a more formal way to say 'father') to address Masayuki, though this nothing more than speculation at the moment. In any case, the Yukimura fans were going crazy about this tiny scrap of new information.

There's a new promotional video for the game, though it's not yet available online. A few jumbled comments about it reveal that:
I can attest to how difficult it is to enjoy a new video and simultaneously remember all of my observations for several hours at a boisterous event, so it's not surprising that the fan reports aren't very detailed. Hopefully it won't be too long before the video is available from the official website so we can check it out properly.

The last piece of news about the new game is that the theme song for Sengoku Basara: Sanada Yukimura-den is to be COMMITTED RED by T.M.Revolution. The lyrics of the song are said to be themed around Yukimura this time.

A double a-side single will be released with both COMMITTED RED and the Kidou Senshi Gundam EXTREME VS-FORCE theme song Inherit the Force. The release date is 6th April 2016, even though the game isn't being released until summer. The first press CD+DVD version (ESCL-4611~4612) will cost ¥1,667 before tax and contain both songs along with their music videos. 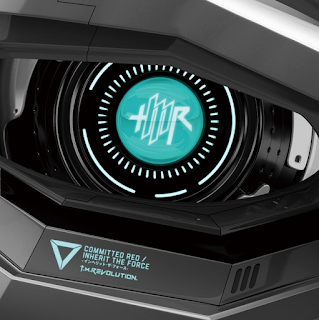 The standard CD version (ESCL-4613) will cost ¥1,111 before tax and contain both songs along with their 'Re:boot' versions. I love that both cover designs have a different theme inspired by the two games. 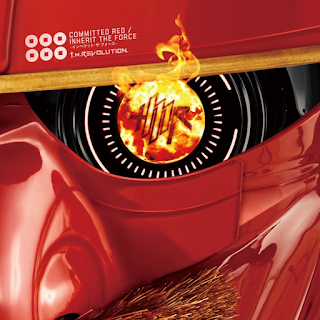 The fan reports mostly focus on the emotional impact of the seiyuu performances - it's important to remember that the main purpose of this event was the series' tenth anniversary celebration. The usual Sengoku Drama Emaki dialogue readings featured many popular scenes from Sengoku Basara 2 and Sengoku Basara 2 Eiyuu Gaiden (HEROES) as a treat for long time fans, and many of the talk segments had the actors and performers looking back over the past ten years. Genda Tesshou (Takeda Shingen) reportedly complained that he wanted to be able to speak English like Masamune in the series. He wanted to be able to say things like "I'll be back!" - apparently imagining Oyakata-sama acting like this made Morita Masakazu (Maeda Keiji) very excited.

In more amusing news, it seems that seiyuu Nakai Kazuya (Date Masamune) was having an exceptionally busy day. After participating in a broadcast earlier in the day, he attended a Gintama Matsuri event elsewhere in Tokyo then rushed to Basara Matsuri. But then he had to return to the other venue in the centre of town for a second Gintama Matsuri event! I'm curious about how much of the performance he was actually present for in the end; many fans have commented with sympathy after learning about his tough schedule.

Although the information about the game was disappointingly scarce, I'm even more surprised at the lack of any big merchandise announcements or crazy tie-ins aside from the song. That's very unusual for a Basara Matsuri and I wonder what KobaP actually talked about during his news bulletin segment since the media reports confirm that there were no big reveals.

The next possibility for some updates is the Basara Club newsletter which is supposed to include an interview with the staff, so I'm looking forward to receiving that soon. Even if they're holding the character information back until April, there's a chance that they'll reveal some more details about the gameplay when that newsletter arrives, right?

Update: The DVD recording of the event is already available for preorder through the Ace Shop along with a few leftover items from the merchandise booth. It's priced at ¥8,000 (plus ¥600 postage) and is tentatively scheduled for release in late June 2016.

The two-disc DVD set will contain the live vocal performances this time with the sole exception of T.M.Revolution's mini-concert. It's expected to include 140 minutes of footage from each of the two performances. Bonus content has yet to be confirmed. 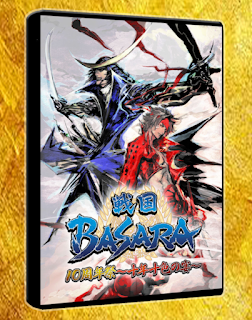 Are all Sengoku Basara discs going to be released through that shop from now on? It's terribly inconvenient for people outside Japan. Of course I'm going to buy it regardless...
at 12:29:00 am