The release of the Sengoku Basara 10th Anniversary Warrior Themes Vocal Collection CD is just ten days away now, and Avex have obligingly uploaded a preview video with clips from some of the songs. I rather like it...


Edit: The official site is now live too with lyrics and samples of the full list of songs.

As I mentioned on Twitter last week, the 21st January 2016 issue of Weekly Famitsu magazine didn't include any new coverage about the upcoming Sengoku Basara: Sanada Yukimura-den game. Instead, KobaP participated in a two-page interview about game tie-ins which looked back at some of the memorable collaborations over the history of the Sengoku Basara series.

KobaP mentioned that KobaP won't have all that many collaborations (in comparison, Sengoku Basara 4 Sumeragi had a lot) but they have some interesting things planned. He noted that he really wants to show off the fighting styles and voice actors for the new characters Sanada Masayuki and Nobuyuki.

Coupled with his comments in mid-December I strongly suspect that at least one of the two new Sanada clan members will be playable in the new game; possibly both of them. 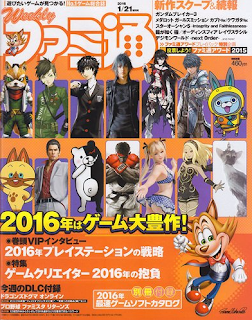 The usual pattern for new information is that Weekly Famitsu breaks it first then Dengeki PlayStation covers it the week after; if that holds true then I would guess we'll hear more on 21st January. However, this is purely speculation and nothing is stopping Capcom from suddenly releasing new information at any time.

The latest Sengoku Basara crossover is with Monster Hunter Explore

Hot on the heels of KobaP's interview, news broke the next day about a new collaboration with iOS/Android title Monster Hunter Explore. Fans of the game will be able to obtain special in-game equipment based on Sengoku Basara between 14th January and 29th January 2016. 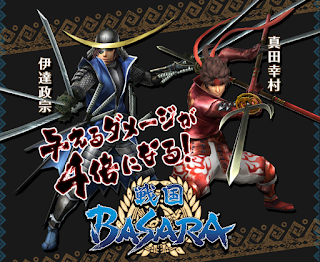 There will be four different three-piece armour sets available for player characters. The Azure Dragon's Armour (Blademaster) and Azure Dragon's Haori (Gunner) sets are lightning elemental while the Akazonae are fire. The armour sets resemble the costumes of Date Masamune and Sanada Yukimura from Sengoku Basara, of course. 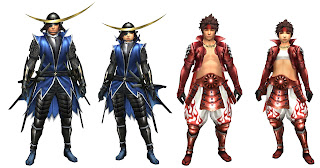 It will also be possible to obtain four weapons. There are one-sword and six-sword versions of Masamune's Kagehide blade, as well as dual and juumonji versions of Yukimura's Shura spears.

(Please forgive any translation issues as I'm not too familiar with Monster Hunter conventions. The juumonji versions of the spears look more like Yukimura's Shakubou to me, but I'm sticking to the naming on the official site for now.)

The Butai Sengoku Basara 4 Sumeragi stage play is starting its run in less than two weeks too, and they've been regularly updating their website with pictures of the cast members in costume. Larger versions can be found on Twitter and Facebook. There are also a few brief video clips with interviews with the actors for Masamune, Yukimura and Motochika.

Speaking of the stage play series, the DVD release of Butai Sengoku Basara 4 has had a few problems as they have been unable to keep up with demand; even people who ordered as soon as the listing went live are still waiting for their copies. The Ace Shop staff have been very apologetic. I suppose that this means the release has been a success, even if fans are still waiting to actually see the show.
at 3:57:00 pm