The results of the first official online Basa-ranking survey

The results from the first online Basa-ranking poll have now been revealed. They asked the fans to pick which of the series' box art illustrations they liked the most and quite a lot of people voted to produce the following list.

You can download the smartphone lock screen images based on the winning image here. Mitsunari and Ieyasu don't appear on many of the designs so perhaps this win can be attributed to a combination of their appeal and the fact that Sengoku Basara 3 did so well; the Battle of Sekigahara is a very popular theme, after all!

The website suggests that we can all look forward to another Basa-ranking soon. Let's hope we don't have to wait too long to share our opinions about something else.

The cover illustration for the third (and final) volume of Yoshihara Motoki's Sengoku Basara 4 manga adaptation has now been revealed ahead of its release next week and it's another stunning picture. Sakon and Katsuie didn't get their own covers so they're sharing this one with their allies in the background. I hope that Yoshihara will return to the series for more adaptations in future. 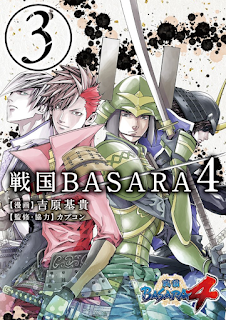 In other book-related news, today is the release day of Sengoku Basara Rival Fortune-Telling from Wani Books. Capcom published a preview to mark the occasion and it shows the way that the information is presented to fit the 'rivals' theme. I'm tempted to say that it's almost as good as a mini art book if you like Yupon's cute illustrations - even if you can't read the text.

A footnote adds that there's a special bonus if you purchase the book from Animate; while stocks last it will come with an oversized clear bookmark.

While this isn't exactly a surprise to anyone who has ever been following Basara Matsuri event news, Capcom recently made the big announcement is that musician T.M.Revolution will be attending the Sengoku Basara 10th Anniversary Matsuri ~Feast of Ten Years, Ten Shades~ event in March 2016 as a performer guest. He will be present on both Saturday and Sunday.

Even if it was expected from the moment the event was first announced, this is great news. It's going to be a great celebration of the series!

CafeReo has posted information about a new batch of 80x65mm Capcom x B-side Label stickers and they're already up for preorder. Kojuurou, Sasuke, Keiji, Motochika and Motonari are joining the product line for ¥400 before tax apiece. 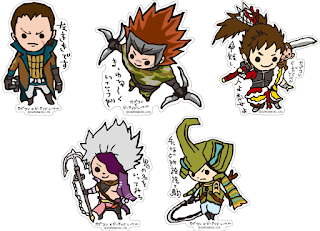 The four designs used for the original stickers are returning too for the Capcom x B-side Label Sticker L range. The 'L' versions are larger at (approximately) 110x100mm in size and cost ¥1,000 each before tax. 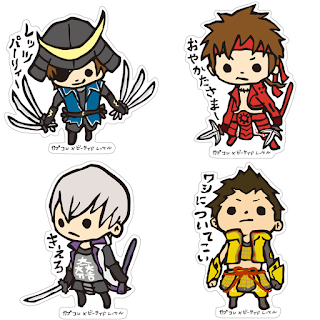 Packs containing all of the sticker designs are also available for those who want the full sets.

Remember the three drama CDs announced at Tokyo Game Show 2015? We now have the full release details. The story outlines and character lists are as described in my original TGS 2015 post.

The first disc will be released on 27th January 2016. It's titled Drama Yose CD Sengoku Basara -Date Masamune & Sanada Yukimura- and the preliminary cover artwork is shown below. They're using the Judge End art style again for this comical food-themed illustration: 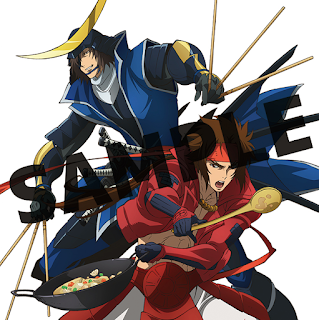