The Jump Festa presentations finished several hours ago and, as feared, nothing much was announced after all despite KobaP's hint about 'the week after next' a fortnight ago. Mercifully Gamer sent a reporter along to provide a full breakdown of Saturday's panel so I don't have to scavenge the details from various Twitter accounts this time.

The reporter noted that the presentation managed to attract a large number of fans in spite of it being a year since Sengoku Basara 4 was released. After series producer Kobayashi 'KobaP' Hiroyuki came on stage and introduced the game with one of its promotional videos, they held one of the usual challenges where players from the audience had to compete to try to defeat the most enemies within three minutes at Sekigahara. The reporter seemed thoroughly impressed with Katsuie, and remarked that the crowd cheered with amazement when someone picked Sourin.

Once all of the fighting was over, KobaP began his news updates by telling the crowd about the upcoming Tales of Zestiria collaboration. It apparently drew a positive reaction from the crowd which the reporter put down to the similarities between the audiences for both games; the Tales series, like Sengoku Basara, seems to attract a lot of female gamers.

There was also mention of a 'Sengoku Basara 4 x Capcom Challenge Park' event involving the Date Cavalry in Aichi's Aeon Mall Okazaki. This will be held between 7th January and 30th April 2015 but there wasn't much more information in the report.

Next came the first information about the activities that are planned for Basara Matsuri. There will be the usual Sengoku Drama Emaki (live dialogue performances by the seiyuu), a seiyuu talk corner, KobaP's latest announcements, a 'variety' corner (this is usually something comical featuring both the seiyuu and the stage play actors) and a mini live concert from T.M. Revolution. Previous news reports have suggested that T.M. Revolution will be performing the Sengoku Basara 4 opening theme Count ZERO for the first time at a Basara Matsuri event as part of the setlist.

In addition, visitors to February's Basara Matsuri event will have the opportunity to buy randomly-packed 'initial charms' for ¥500. These depict popular warriors in their alternate outfits from Sengoku Basara 4 along with a character from their name. Each charm is made from acrylic and approximately 5cm long. There are two different sets available: 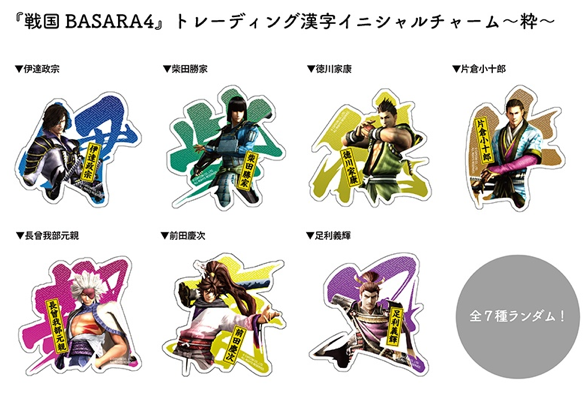 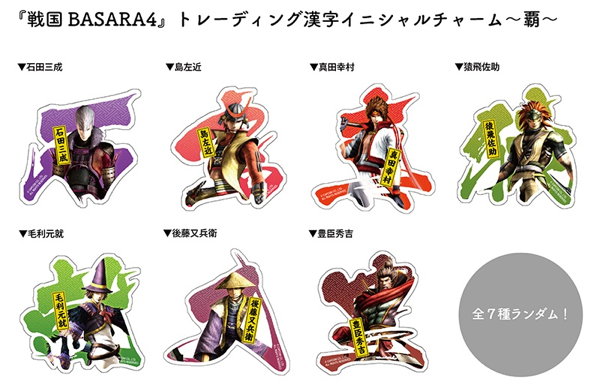 The presentation closed with KobaP telling the crowd that he's been promoting Sengoku Basara 4 all year long now since its release back in January. He urged people to wait until next year for more about the series' tenth anniversary and the next title, and joked that he wasn't able to say anything at the moment. And that was all.

Well, it's nowhere near as exciting as a game (or guest) announcement would have been, but at least the new charms look cool. I can't believe that Basara Matsuri is taking place in less than six weeks!
at 3:37:00 pm