It's almost time for the promised Sengoku Basara presentations at Jump Festa this weekend!

Capcom posted an update last night to advise that the start time will now be 13:30 - ten minutes earlier than previously stated. The presentations are still scheduled to last just half an hour each.

In addition, there's been a last minute announcement which confirms that seiyuu Okamoto Nobuhiko (Shibata Katsuie) will be joining KobaP on stage for the Sunday show. This is also being reported all over the gaming press and on the Basara Matsuri website so I hope that KobaP has some interesting news to share with us all.

(If his hinted game announcement ends up being the upcoming Tales of Zestiria collaboration we already know about, I will cry.)

A preview image arrives for the final Judge End keychain

I'm not sure why it took VAP so long to add the sample picture to their site this time, but they've finally revealed how the bonus keychain from the first press version of the final DVD/Blu-ray volume of Sengoku Basara Judge End will look. 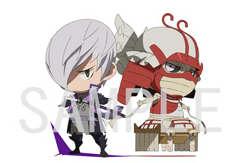 I'm not feeling well at the moment so some delirium may be contributing to this post, but what if KobaP really is announcing the next game this weekend? And what if the reason Katsuie's seiyuu is accompanying him on Sunday is because there will be an Oda theme to the game?

What if that means they're going back to their roots as part of the tenth anniversary celebrations, and bringing back Nouhime and Ranmaru (and dare I hope, giving the classic characters who were only partially finished in Sengoku Basara 3 Utage proper upgrades and stories of their own)?

Well, it could easily just be that Okamoto was the only one of the more popular seiyuu who happened to be free that weekend - they used Kojuurou's seiyuu to announce a few things at Kyomaf last year even though he's not all that significant in Sengoku Basara 4. The staff have said before that Sakon is popular all by himself whereas Katsuie needs more support.