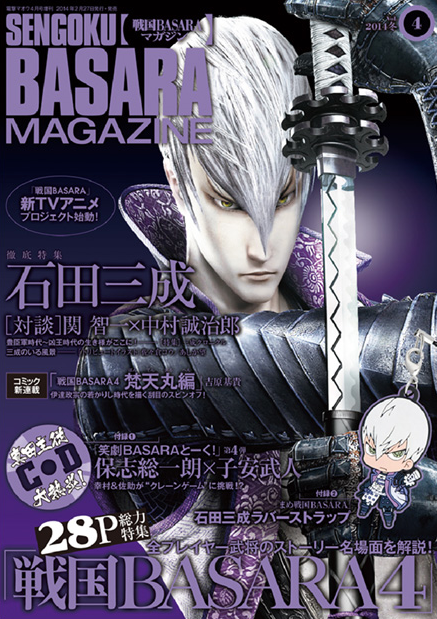 I don't think it's unfair to call this fourth issue the least interesting volume of Sengoku Basara Magazine so far, primarily because its release comes long after most readers will have picked up their copies of Sengoku Basara 4. There's very little new information left to reveal about the latest game that hasn't also appeared in Weekly Famitsu, Dengeki Playstation and the various books which have been published, and it's apparently still too early for Capcom to share any news about the upcoming stage play or anime adaptation too. I'm hoping that will change next month after the Anime Japan event takes place but there's no way to know for sure.

Anyway, the magazine was released on 27th February 2014 for the usual price of ¥2,400. At the time of this review it is still available for order internationally through Amazon Japan, Yesasia, CD Japan and Manga Oh. All of the previous issues sold out reasonably quickly (the prices for used copies of the first issue are ridiculous) so it's best to place an order swiftly if you plan on adding this to your collection someday.

Ishida Mitsunari is the fourth warrior to feature on the magazine's cover and Mame Sengoku Basara rubber strap. Like Masamune last year, he's received a new CG illustration - I hope that the other cast members (along with Yukimura and Ieyasu who missed out) will receive new artwork in the coming months now the game has been released!

The bonus talk CD is Showgeki Basara Talk! Yukimura & Sasuke No Maki Vol. 2 with seiyuu Hoshi Souichirou and Koyasu Takehito. I had a quick listen as I worked earlier and they were both adorable as they navigated topics about the Sengoku Basara 4 characters; Koyasu muttered that he liked Nouhime at one point and lamented her absence in the latest game. The popular 'Basara Challenge' segment involved Yukimura and Sasuke visiting an amusement arcade and trying out a crane game. Yukimura's tortured howls of disappointment made it very funny.

The first 28 pages of the magazine are devoted to tips and information about Sengoku Basara 4. Every single playable character gets some coverage, though since most of the space is devoted to the various story routes those with just one don't get as much attention as those with several. The gameplay tips don't include anything that hasn't already appeared in previous publications (we have to wait for the Complete Guide book for that). The article analyses each story (with occasional comments from the creators too) and small CG pictures of everyone posing in their alternate outfits provide a taster of the kind of content the Official Complete Works book will be presenting in the next few weeks.

A single page interview with series director Yamamoto Makoto and producer Kobayashi Hiroyuki ends the Sengoku Basara 4 story coverage.
A very short summary of the January Sengoku Basara 4: Basara Matsuri 2014 ~Shinshun No Utage~ event is next, then the contents page shows off the full version of the new illustration of Mitsunari used on the cover of the magazine. I like it much more than his official Sengoku Basara 4 artwork.

The big photo interview this issue is with seiyuu Seki Tomokazu and stage play actor Nakamura Seijirou, both of whom play Ishida Mitsunari. They both made mean-sounding remarks about his hair when they described their feelings on seeing Mitsunari's design for the very first time, and spoke at length about how they were interested in Shima Sakon and Sengoku Basara 4's revival of the Toyotomi army. Seki's forced-looking grins always make me laugh.

The next feature is the 'Mitsunari Chronicle', a full seven-page retrospective on his history with the series followed by a pair of beautiful two-page illustrations. Sasakura Kou drew him standing with Shima Sakon and coloured it more boldly than her usual style (I didn't recognise her work for a moment!). Ashika Nozomu opted to draw Mitsunari charging into combat backed by Hideyoshi, Hanbee and Yoshitsugu (sample). Both pictures are fantastic tributes.

The end of the Mitsunari Chronicle leads straight into a short photo report about the most recent stage play, Butai Sengoku Basara 3 Utage II: Kyouou Tanjou x Shinen No Utage ('The Birth Of The Dark King x Feast Of The Abyss'). I skipped this as I'm still waiting for the DVD version of the play and it looked as though there might be some mild spoilers. Since Mitsunari is a major part of the story it made sense to put the two articles next to one another.

The usual merchandise and news roundup is next with details of new Mame Sengoku Basara badges and cellphone cleaner straps amongst the older announcements.

It's then time for contributions from the magazine's readers, including the results from the survey in the previous issue! I feel as though the Sekigahara duo fans were voting most passionately this time...

The editor said that there were a lot of different votes even though the top pair won by a large margin.

The editor commented that Kojuurou turning his blade on Masamune and Nagamasa's death (from the anime adaptation) were present lower down in the rankings.

There will be rankings for the readers' favourite warriors, character combinations and lines in the next issue.

The rest of the magazine is mostly devoted to manga. First is the brand new Sengoku Basara 4: Bontenmaru-hen story drawn by Yoshihara Motoki, which tells the story that was hinted at in the game when Masamune and Kojuurou reflect on the time they first met. It's gorgeous - and it's not a one-shot after all, since it's only the first chapter with a second promised for the next issue of the magazine. Yoshihara posted a selection of sample pictures on Twitter to promote the magazine including these lovely shots of the young Masamune. There's a little fan service for Takeda army supporters, too. I can't wait for the continuation as the 28 pages flew by far too quickly!

Four celebratory pages of the Wan-Nyan Sengoku Basara manga come next; it apparently received enough good feedback after its one-shot debut to earn a regular place in the magazine. Kingo, Tenkai, Hanbee, Motonari, Sourin, Muneshige, Kanbee, Kenshin, Kasuga, Keiji, Magoichi, Motochika, Sakon and Katsuie all make brief appearances in this preview of what's to come in future chapters. It's a little hard to tell which of them are cats and which are dogs at times, but they're all very cute.

Once again the two individual columns written by the series' creators have been placed in between the manga chapters to break them up. KobaP's Kobayashi HiroyukiP No Kyou Mo Basara Na Hi diary has a selfie he took when he was getting ready at Sengoku Basara 4: Basara Matsuri 2014 ~Shinshun No Utage~ and talks about his emotions as the game nears its release date (he wrote the column some time before the magazine went to print, evidently). He seems positive about the future, saying that he feels that the series isn't over yet and he'd better make preparations for the upcoming ten year anniversary.

The second creator column is series director Yamamoto Makoto's usual character design interview, this time about Kuroda Kanbee. Highlights:
An advertisement for the new Mame Sengoku Basara 4 manga shows the rough line art for mame-style Katsuie, Sakon, Matabee and Shikanosuke/Oyassan together with the final page of the original Mame Sengoku Basara series where Katsuie and Sakon made their first appearances in the series. Fans are advised that the new manga will include the new characters as well as the old favourites when it begins its run in Dengeki Maoh. A side story will also feature in the next issue of Sengoku Basara Magazine.

The third manga is the climax of Satta Naoto's Sengoku Basara ~Soul Revolution~ drama CD adaptation. The story comes to an end with a generous 46-page finale and even Ieyasu gets to participate (he was excluded from the drama CD version due to failing to rank high enough in the BSR48 popularity vote).

A handful of advertisements (including one which promises a Sengoku Basara 4 manga anthology in April 2014!) fill out the last few pages of the magazine. The fifth issue of Sengoku Basara Magazine will be released in the spring and Chousokabe Motochika will appear on the cover and rubber strap. The CD will star Ookawa Tooru (Tokugawa Ieyasu) and Seki Tomokazu (Ishida Mitsunari) and there will be three manga serialisations: Mame Sengoku Basara 4 (Shucchouban), Sengoku Basara 4: Bontenmaru-hen and Wan-Nyan Sengoku Basara.

So, ultimately there wasn't much information at all in this issue aside from manga release news and a few hints about Mame Sengoku Basara merchandise. It was cruel of them to mention the anime adaptation on the front cover. I still found it a satisfying read and for Mitsunari fans it's a must-have; the Bontenmaru-hen manga is the other main attraction for those who prefer the Date army. If they invite Motochika's actors for the main interview next issue I'm curious whether seiyuu Ishino Ryuuzou will be joined by the current stage play's Aniki or a selection of the previous actors too - he's been played by so many different people! I'm still not convinced that the new one will be able to top Hamao's excellent performance...
at 11:57:00 am