I picked a terrible day to sleep in! After sorting through all of the alerts in my inbox this morning, it seems that today's Basara Club fan meetings in Tokyo coincided with the formal announcement of more details for the upcoming anime adaptation!

The title for the 'third season' of the Sengoku Basara anime has been confirmed as Sengoku Basara: Judge End, with a single piece of artwork revealed so far: 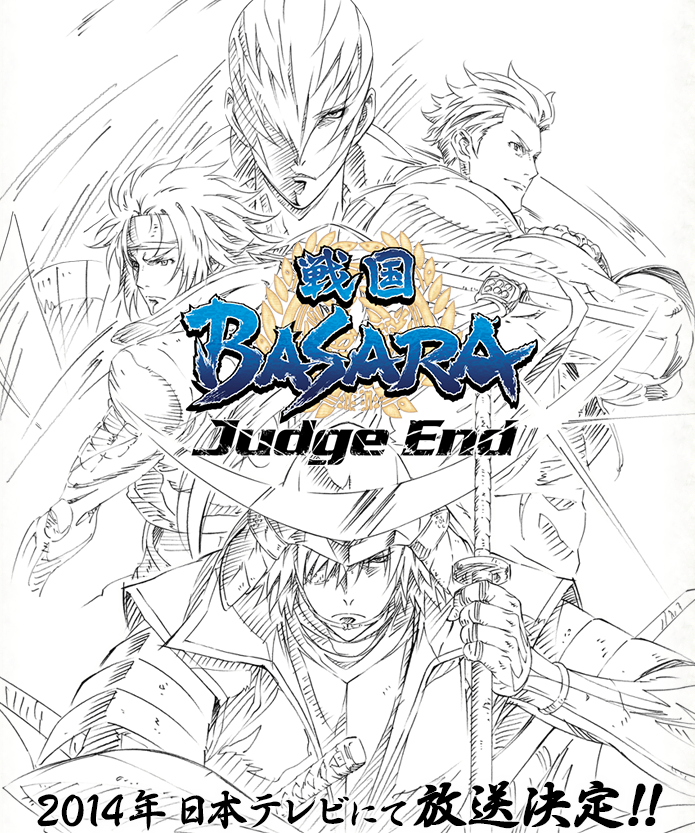 The new series will be broadcast on Nippon TV in 2014 and the animation studio has been switched from Production I.G. to Telecom Animation Film. The first four cast announcements include Date Masamune (Nakai Kazuya), Sanada Yukimura (Hoshi Souichirou), Tokugawa Ieyasu (Ookawa Tooru) and Ishida Mitsunari (Seki Tomokazu), and the story will be based on the Battle of Sekigahara from the Sengoku Basara 3 game.

It looks as though there could be be more information on Saturday 22nd March as seiyuu Nakai Kazuya is set to appear at the Anime Japan event during a Nippon TV presentation at 12:20 local time. The Twitter account for the new anime has confirmed that there will be Sengoku Basara: Judge End mugs available for attendees to purchase for ¥1,200.

Well, even though I was half expecting today's events to reveal something, I'm so glad we have a piece of artwork already! I'm anxious about the change from Production I.G. (especially after they used them so recently for the cutscenes in Sengoku Basara 4) but things look pretty good at the moment.
at 1:08:00 pm