I've been trying to take it easy this season since I came in so late that it was tough to get caught up on everything. Still, there were quite a few good shows which prevented me from watching as little as possible and easing myself in gently. It helped that I was able to watch absolutely everything I wanted on Crunchyroll alone (for once), avoiding the hassle of juggling half a dozen different streaming services with their own unique annoyances. 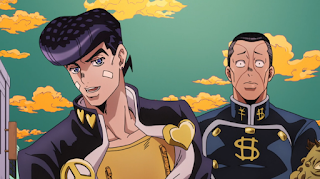 Although they started out reasonably strong I ended up dropping Touken Ranbu: Hanamaru and Magic-kyun! Renaissance due to time constraints; neither really succeeded in keeping my attention. And I wonder what happened to the promised Watashi Ga Motete Dousunda (Kiss Him, Not Me) simulcast? It never turned up. UK license-holders Anime Limited say the signed paperwork was turned over to Crunchyroll but the show remained region locked away from the UK right until the end. A pity.

It's difficult to rank individual shows for this post-season ranking. There were a lot of titles I enjoyed but my favourites changed week by week!

Yuuri!!! On Ice was amazing, a real surprise bursting with idealism and elegance. On the other hand, this year's long-running JoJo's Bizarre Adventure saga somehow kept things bonkers from start to finish and was like nothing else I've watched all year. Then there was Drifters, which I'd been looking forward to for ages and found even better than the manga. They're all completely different shows and incomparable, so the ranking is even more meaningless than usual.

Bungou Stray Dogs season 2
After reestablishing the series' setting with an interesting arc about the spooky Port Mafia, Bungou Stray Dogs went straight back to covering our heroes' present day exploits as part of an increasingly intense three-way conflict between the Armed Detective Agency, the Port Mafia and the Guild. The introductory arc helped explain Dazai's dark past and motivations, and the cruel Guild members made for interesting adversaries who forced the other two organisations to set their personal grievances aside on more than one occasion for the greater good. I never really appreciated it happening, but lead character Atsushi himself has also grown a great deal over the course of the series. Bungou Stray Dogs managed to impress me more with its second season and I'd happily lap up another batch of episodes in future.


Drifters
It was always inevitable that Drifters was going to be unfinished without running far longer than its allotted twelve episodes, so I'm not surprised or disappointed that it left the sweeping battle between Toyohisa's growing army and the forces of evil unresolved. I love the (equally-unfinished) manga and this adaptation was just great, from the thumping opening theme to the heroic end title sequence, satisfying my love of history, action and geeky jokes all in one go. This series makes all of the other 'historical warriors coming together to fight' titles seem weak in comparison. Roll on season two.


Gakuen Handsome
I don't have much to add to my first impressions post. Gakuen Handsome is stupid and looks terrible. That's deliberate, since this is a parody of BL harem games. There wasn't enough content in this short series to bother with a coherent plot, but the deadpan humour was a funny diversion and the episodes weren't long enough to outstay their welcome. A decent comedy which is very much a product of its time.


Haikyuu!! season 3
The first show I was following to finish its run after just ten episodes, Haikyuu!! pulled out all the stops and reminded me why I liked the series so much. This season tells the story of a single volleyball match against a powerhouse school nobody was really expecting our heroes to be able to beat, and it does so beautifully, with every character on both teams getting a few moments to shine as the gruelling battle wages onwards. Even the cold Tsukishima finally opens up more to his teammates and comes off all the better for it. I support the underdogs at Karasuno along with the majority of viewers, but I think the best part of this arc was that I also liked the villains: Tendou Satori's stupid facial expressions could fuel the entire Internet in reaction images for decades to come.


JoJo's Bizarre Adventure: Diamond Is Unbreakable (JoJo No Kimyou Na Bouken)
It ended! The latest series of JoJo's Bizarre Adventure really wormed its way into my life. It had a completely different feel to the earlier outings, with the high stakes questing replaced by a series of small town adventures which felt more like an episodic detective show some of the time. The creator's vivid imagination kept things interesting (and exceptionally dramatic) even during the most outwardly-mundane storylines, and as with every new JoJo series there were several characters I found particularly fun to watch, namely Okuyasu and Rohan. Jousuke himself was great too, and having his special power be more useful for healing than destruction was a clever twist; rather than overpowering his enemies like Joutarou he was forced to outsmart them by using his talents in unusual ways instead. There's still more than enough manga to adapt, so where's the confirmation that the next series is on the way?


Keijo!!!!!!!!
How did I watch this all the way through? Keijo!!!!!!!! is unashamedly the most trashy show of the season (if not the entire year). I don't like any of the characters, or the art, and the 'sport' of keijo around which the plot revolves is utterly stupid. The athletes themselves seemed just as disinterested, being constantly surprised whenever some new rule or event is mentioned despite supposedly loving the sport and studying it every day. But there's something addictive about the series' singleminded pursuit of entertainment over common sense, and the enthusiasm that the staff (and localisation team) had for making butt-related puns is worthy of respect in its own twisted way. Although I would not recommend this to anyone else, it was a fun watch as a guilty pleasure.


Uta No Prince-sama Maji Love Legend Star
This season of UtaPri starts out just as any other; the ST☆RISH boys are each forced to team up with one of their counterparts from HE★VENS to create a series of duets, which just so happens to mean each episode can focus on one new character along with one of the older ones to give everyone a decent amount of character development (the four guys from QUARTET NIGHT get their own short story early on, too). Of course, each generic-sounding duet has a story behind it, which usually involves the HE★VENS members being obnoxious and disruptive while the familiar cast try to learn to work with them. Surprisingly, the plot takes a darker turn towards the end and develops a few of the veterans (and the relationships between the boys) more than I expected; the leader of HE★VENS finally gets some proper screen time as well to make his priorities clearer to the viewer. I enjoyed Legend Star and the big climax at a major concert was pure bliss. I'll be looking forward to the next UtaPri adaptation, as always!


Yuuri!!! On Ice
I took Yuuri!!! On Ice to be a skating show first and foremost at the start, never even dreaming that the cute romance plot was ever going to be developed properly in the background without compromising the sporting action. Honestly, I was expecting it to take the form of cheesy fan service to add a dash of levity to the intense competitions in between. Wow. I was wrong. It's rare that a sport-themed title manages to drastically escalate the drama both on and off the pitch (erm, rink), and it expertly tied both sides of its story together throughout every episode. The finale was a magical celebration of sequins, passion and feelings, and if they're really working on a sequel it cannot come soon enough. I loved every single character by the end, even J.J. whose stifling overconfidence initially annoyed the heck out of me. Great show.


ALL OUT!, March Comes In Like A Lion, Nobunaga No Shinobi and Mobile Suit Gundam: Iron-Blooded Orphans are continuing into the Winter 2016 season, so even without adding any new shows I have quite a few titles on my plate. I hope I can catch up on my real life a bit more for a few days!