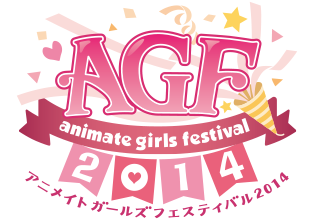 This weekend, the Animate Girls Festival 2014 (AGF) event was held in Ikebukuro's Sunshine City entertainment complex. AGF is a gaming convention solely targeted towards female fans - in other words, it's a feast of otome games and bishounen-filled anime which don't have to share billing with the big-budget mainstream games aimed at a male audience.

There are a few big brands in the otome gaming world which tend to dominate (e.g. Uta No Prince-sama, Hakuouki, Diabolik Lovers and Starry Sky) but one of the best things about female-orientated gaming is that it tends to be full of obscure titles which don't need huge budgets to generate a loyal fan base. To an outsider, the booths were probably full of similar-looking male hosts sporting colourful hair, ridiculous costumes and sexy poses, but to a fan this was as diverse a concentration of female-orientated content as you could possibly get.

The festival was split into two separate events on the 8th and 9th November 2014, each of which had a staggering amount of special merchandise, stage events and light hearted attractions on offer. With this being the event's fifth year everything was run in a professional way without too much queueing once the early morning crowd began to clear. 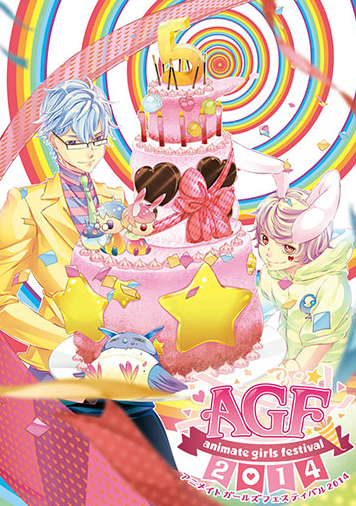 Getting in in the first place was a challenge though. I attended on the second day of the event and even though we turned up early the queue already snaked across every available inch of space in the Sunshine City area and out into the streets. It was pouring with rain for the first hour and everyone was stuck outside trying to avoid getting their costumes (and tickets) wet. 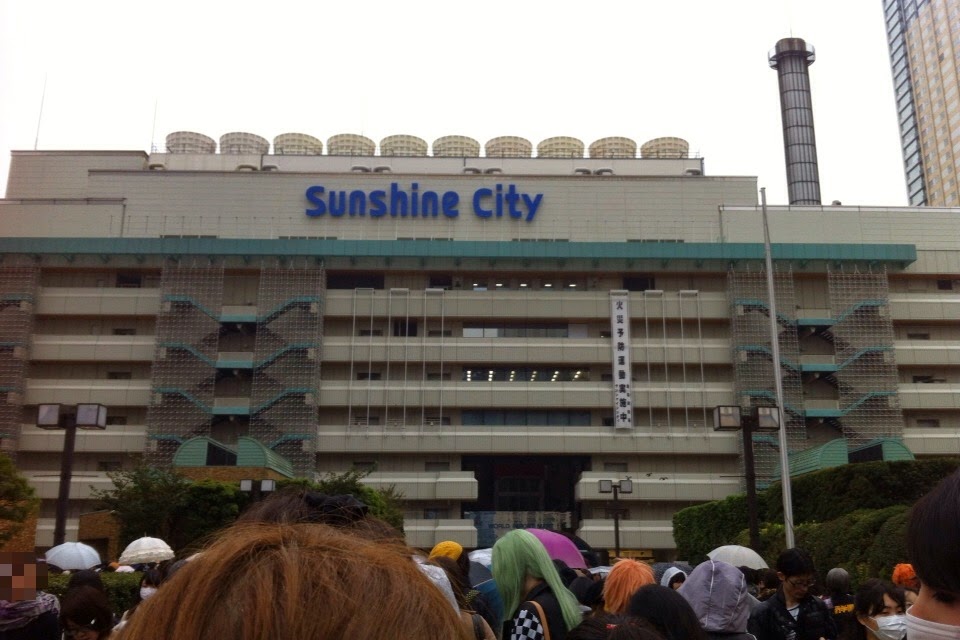 The disadvantage of the exhibition being so famous nowadays is that entry tickets for AGF 2014 sold out several months in advance - by the time I purchased mine I was forced to go with one of the bundle packs which included a special CD too, and even those were all gone long before the show opened. A small number of tickets were originally supposed to be available on the door but demand was too high. If you wanted to go on a specific date or in a group you had to plan ahead or risk disappointment. 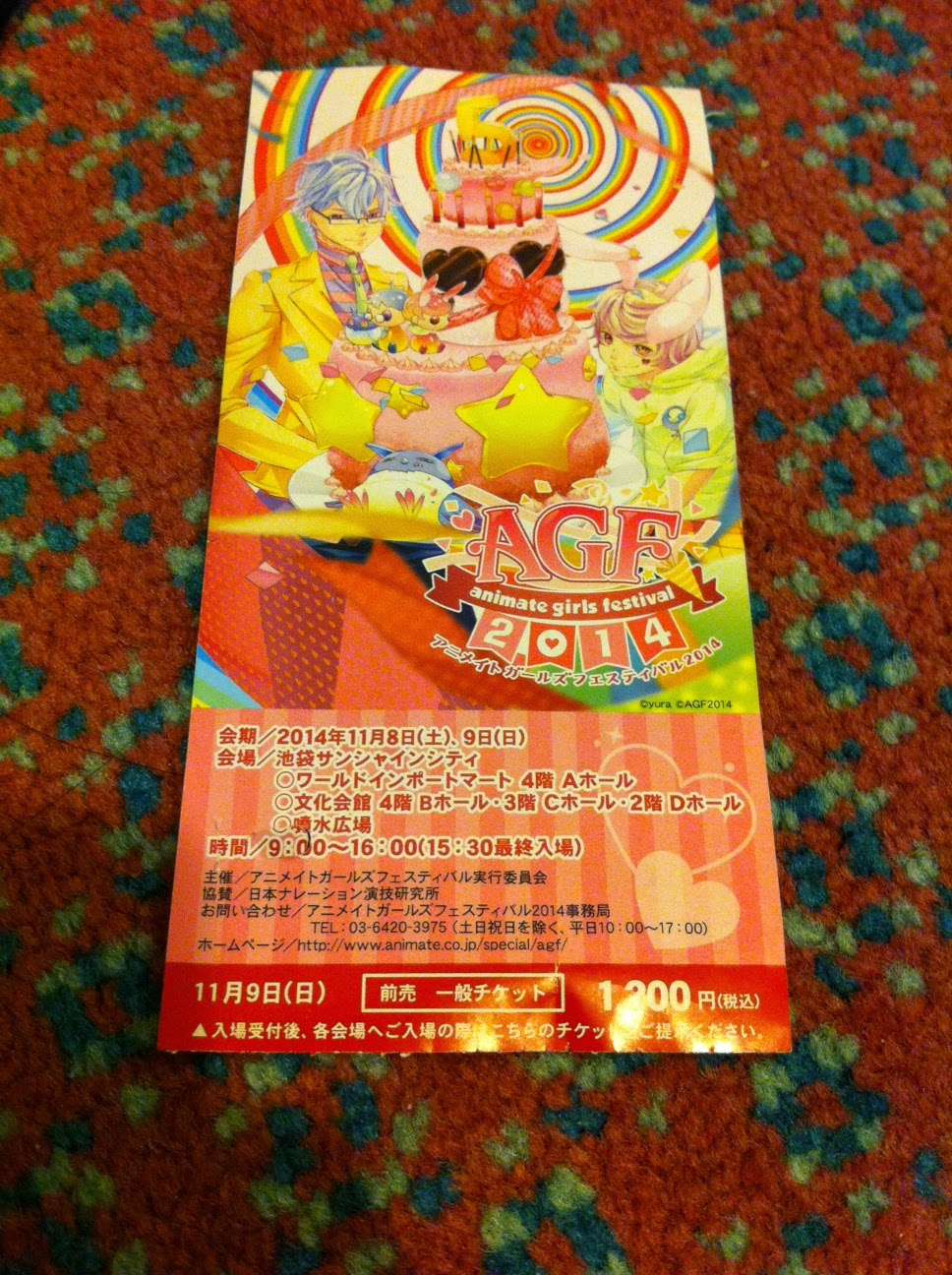 I hope they'll consider expanding the event in future; it could easily fill a few halls in Tokyo Big Sight and attract even more visitors with less crowding. 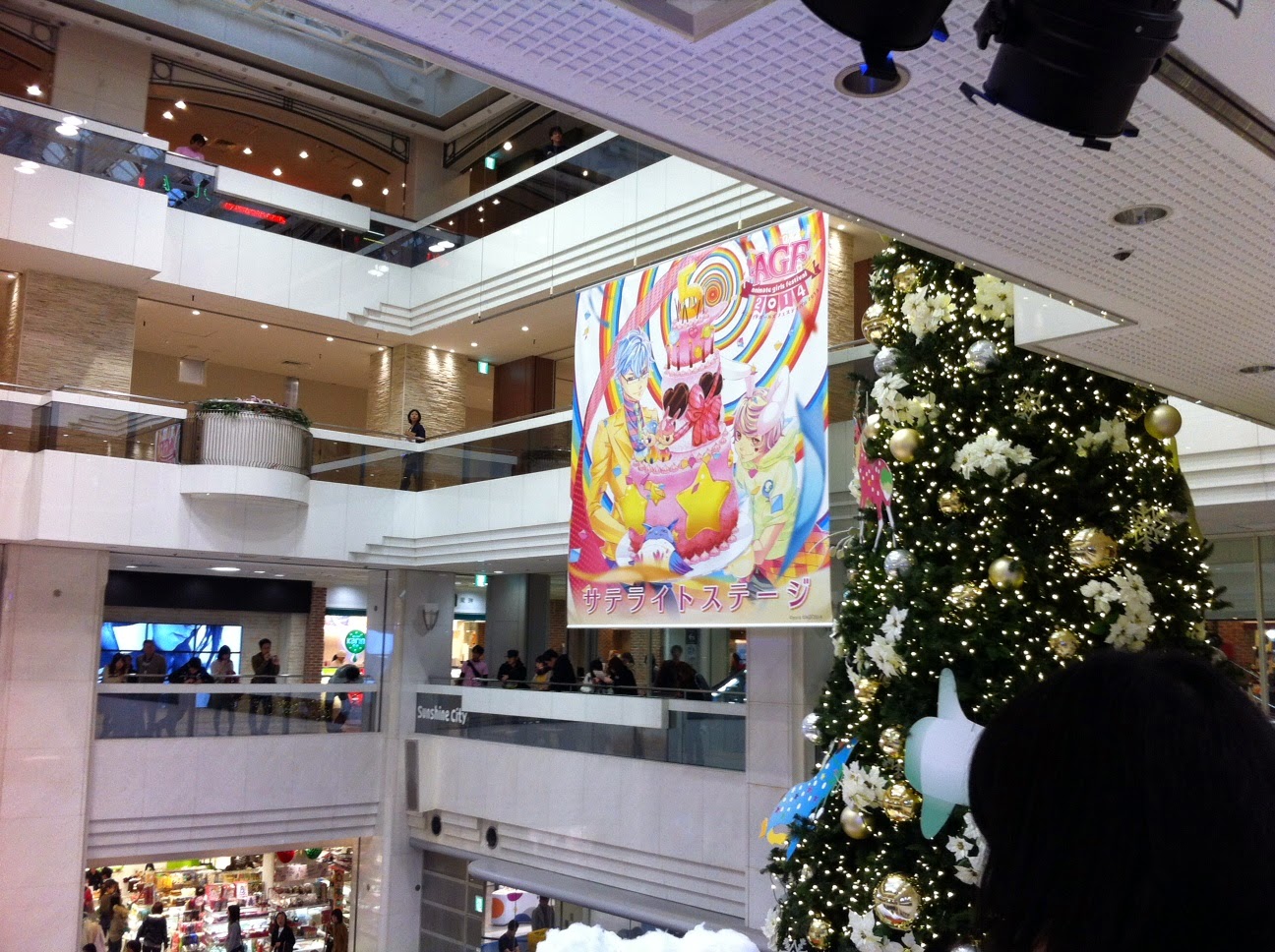 The Sunshine City complex in Ikebukuro has a number of event halls dotted throughout its buildings, all separated onto different floors. The organisers designated each hall with its own colour label and employed dozens of guards to help usher everyone into the correct areas. I ended up having to visit every hall just to see all of the titles I wanted since everything was spread out - a necessary evil, as putting popular booths such as Rejet's and the Uta No Prince-sama area close together would have caused far too much crowding. 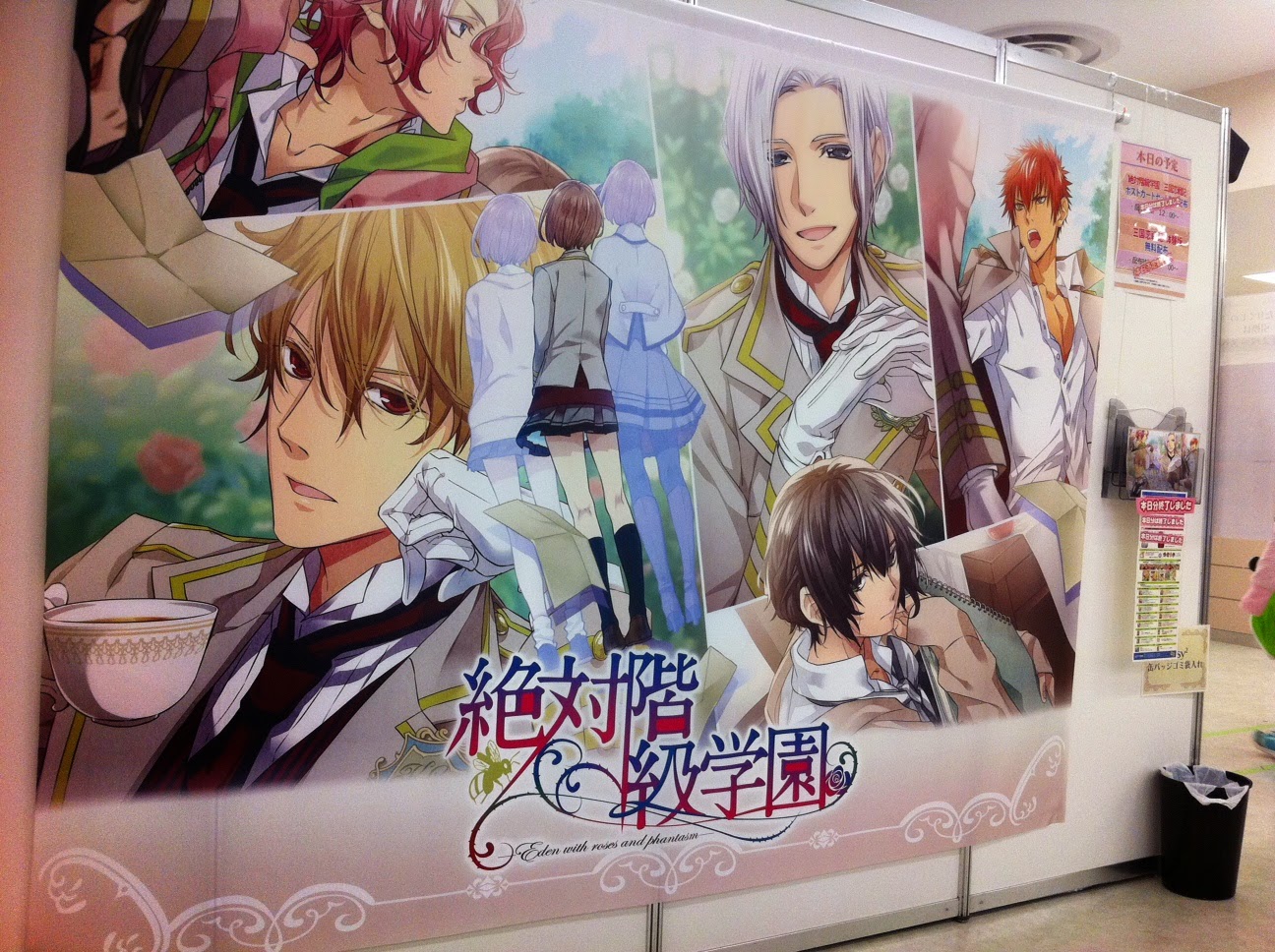 Photography isn't allowed in most areas since you might accidentally capture someone's face in your picture or block the flow of people between booths. I took the opportunity to snap a few pictures whenever it was allowed. Just imagine that there are hundreds of delighted girls on either side of the photos and you have an accurate idea of what it was like. 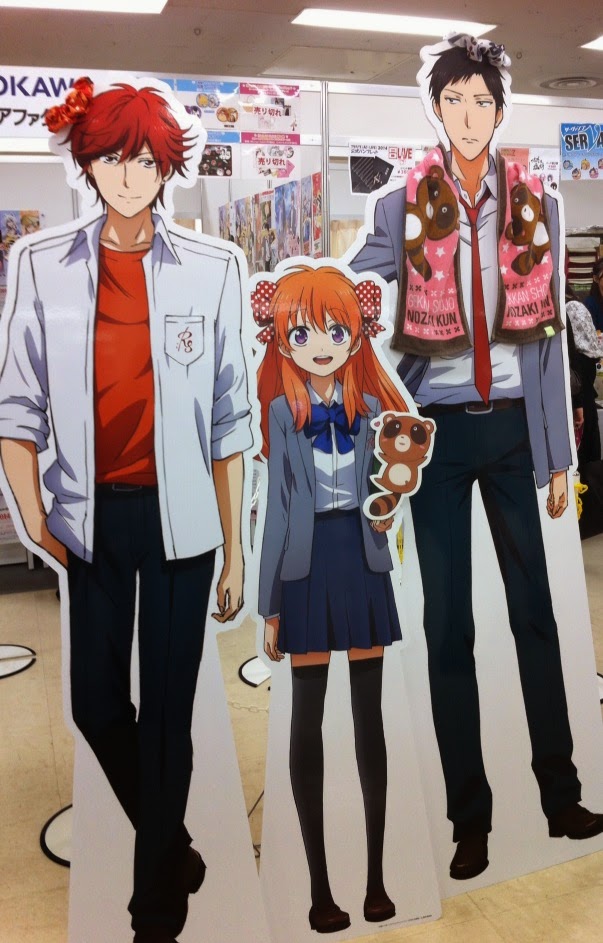 Some booths opted for cardboard standees like those pictured above, while others chose to employ beautiful cosplayers (both male and female) to attract customers for photo opportunities. I took some pictures of my friend posing with both Rei and Makoto from Free! and Okita Souji from Bakumatsu Rock. I wish I'd taken pictures of the models on their own so I could share them. As I didn't, here's a cute bear dressed up as an Attack On Titan (Shingeki No Kyojin) character instead. 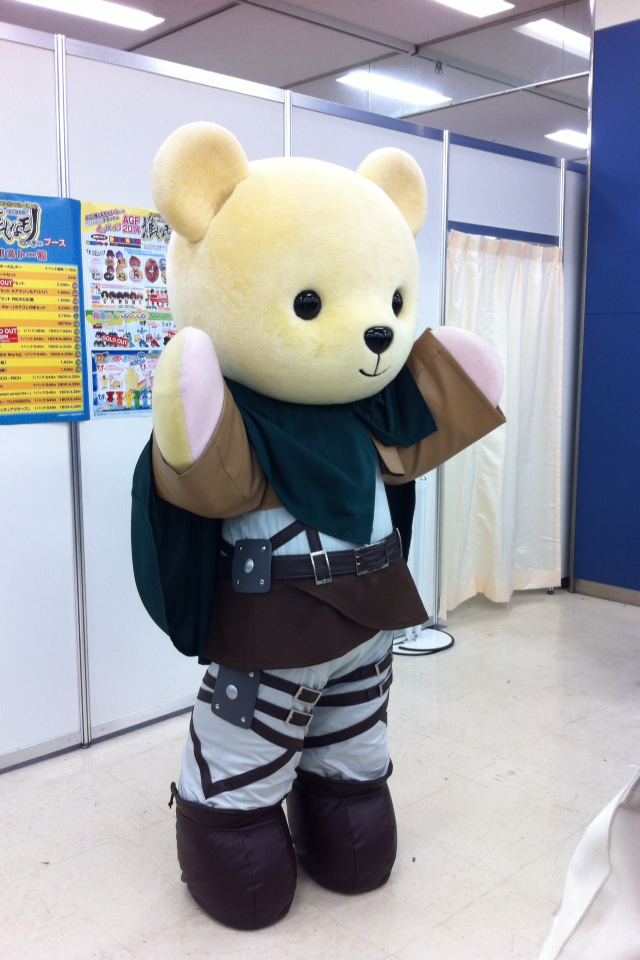 Model specialists were out in force at AGF 2014 too. MegaHouse showed off some of their latest prototypes to give attendees a sneak preview. Photography was only allowed around the older figures, so I'll have to wait a few months before taking a picture of the new Grell Sutcliff (Kuroshitsuji). 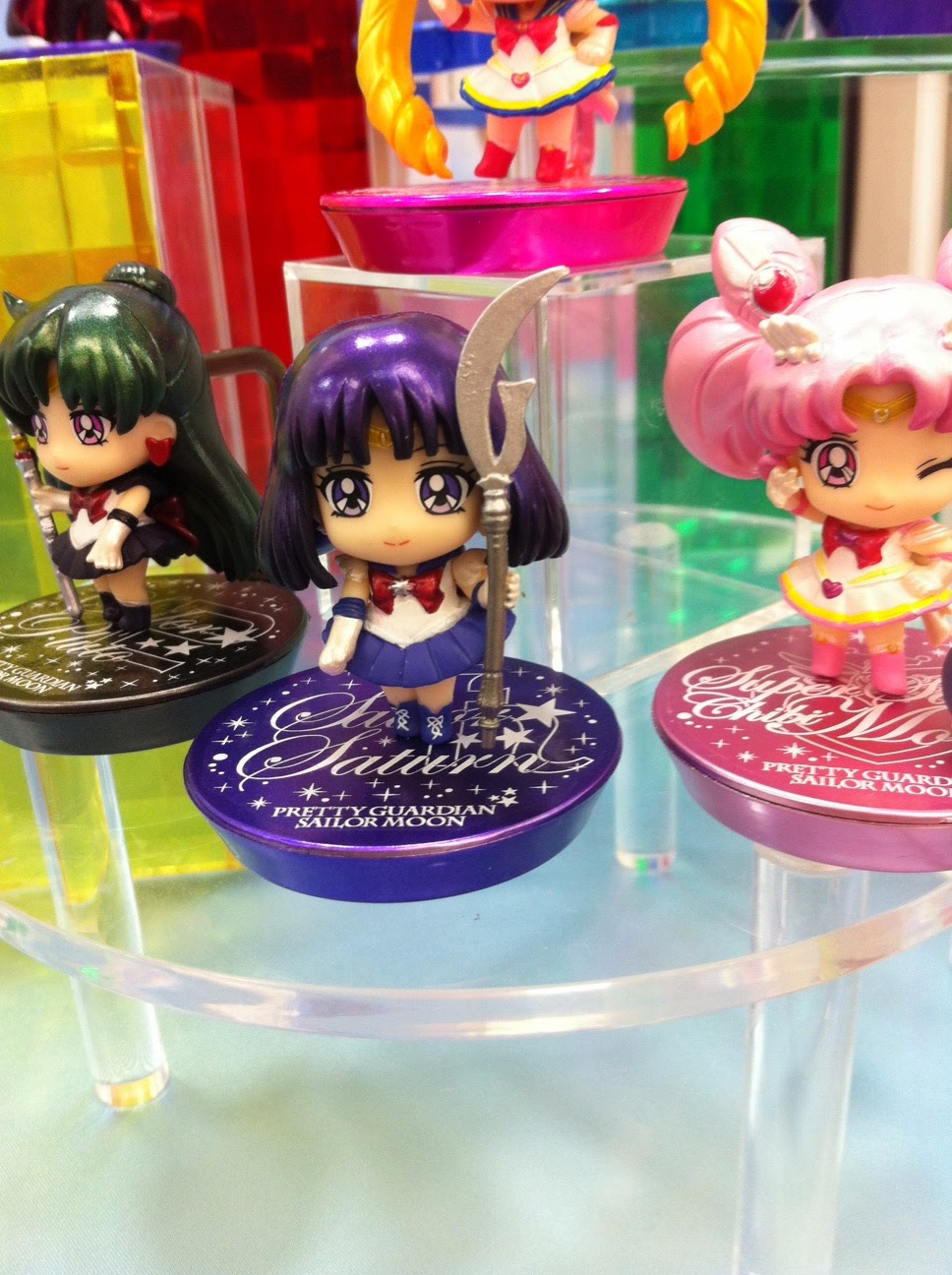 It was difficult to avoid the impression that the displays had been calculated to appeal to a female audience. 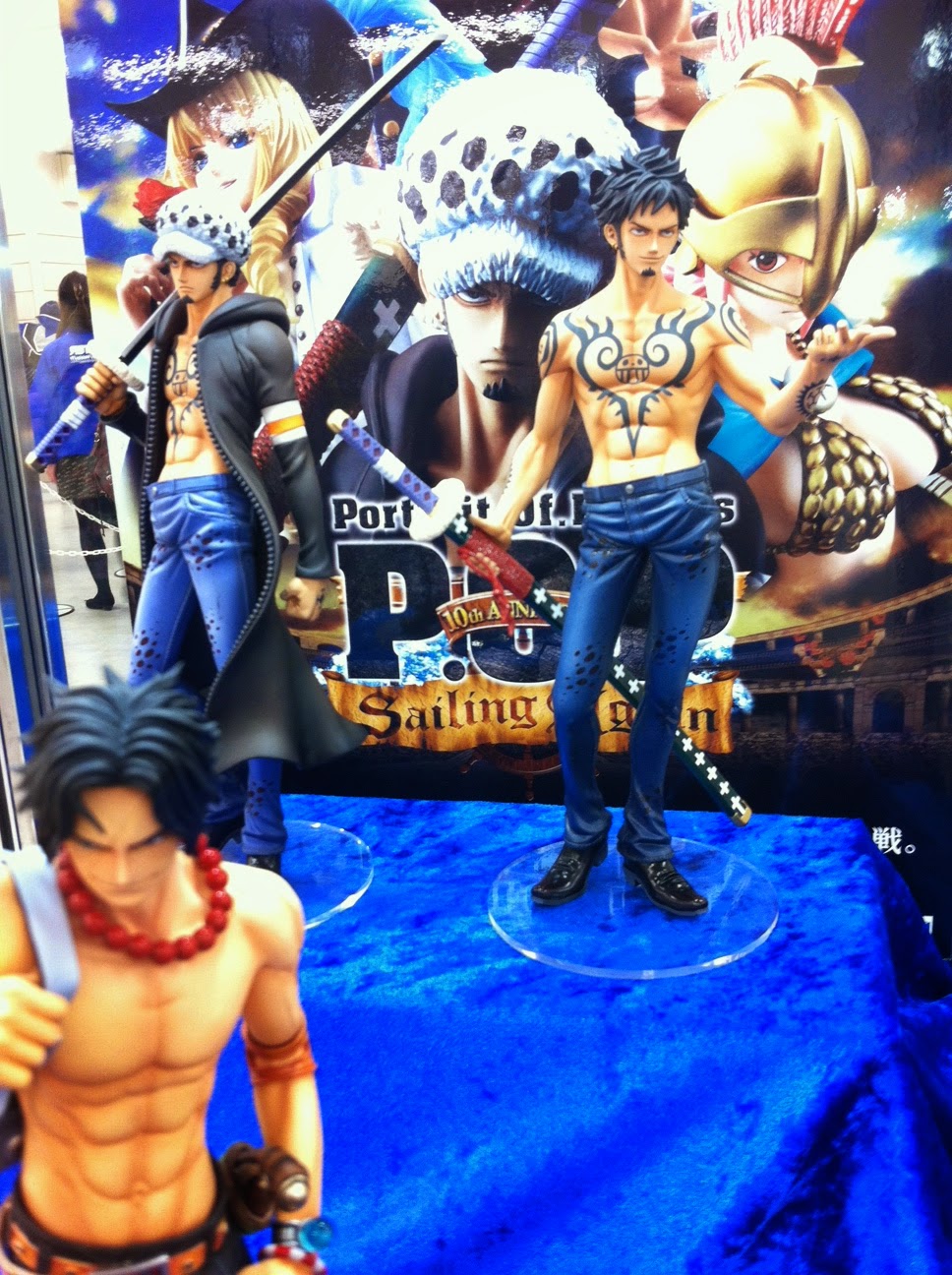 The sudden resurge of interest in Cardcaptor Sakura is fun. 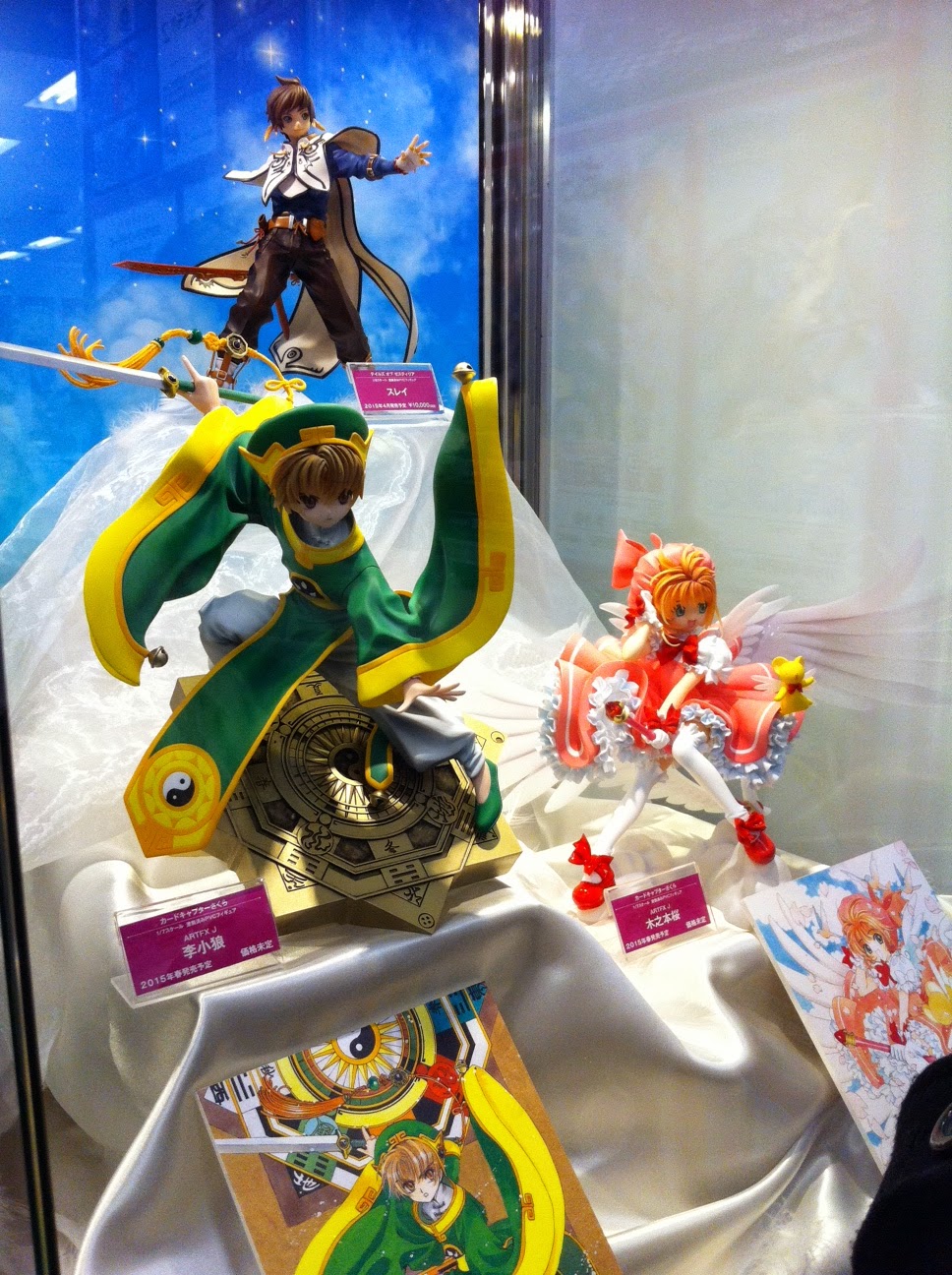 Good Smile Company let me take a picture of this beautiful prototype Nendoroid of Noiz from DRAMAtical Murder. 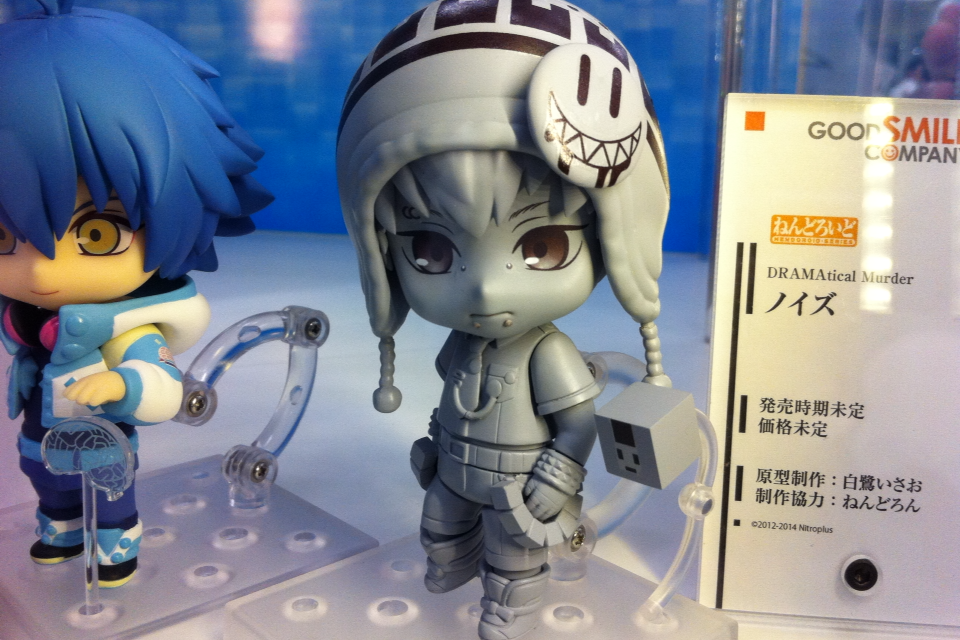 Since Animate itself is just across the road from the venue, the celebrations spilled outside of Sunshine City and into the surrounding streets as well. I took a stroll outside halfway through the day to get some air and relax. Cosplayers were posing for pictures in the small park nearby, and this cheerful lorry blared music as it drove around the area promoting the event all day long. 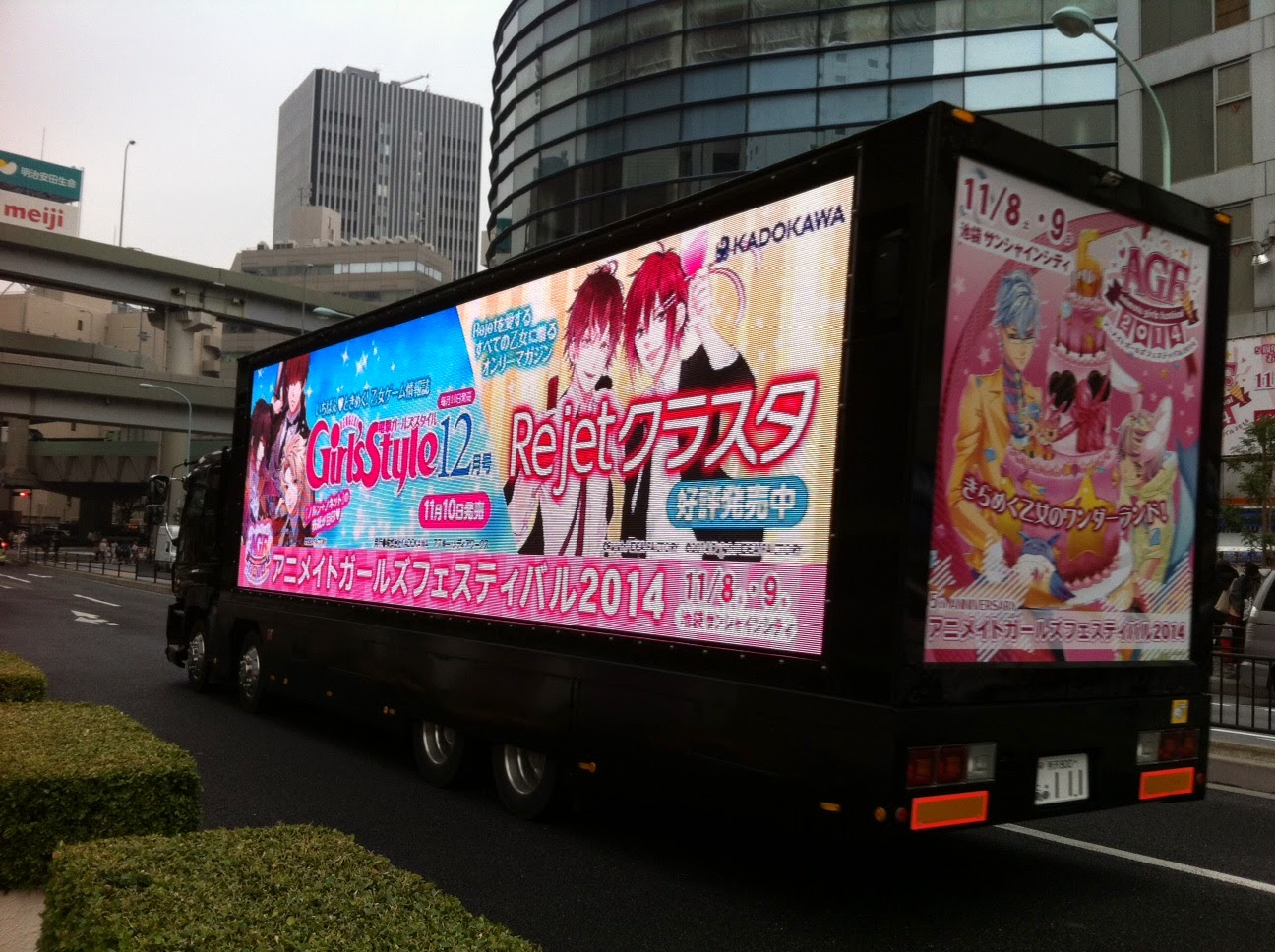 Some local otaku had parked their itasha in a line along Otome Road. Love Live! is very popular at the moment. 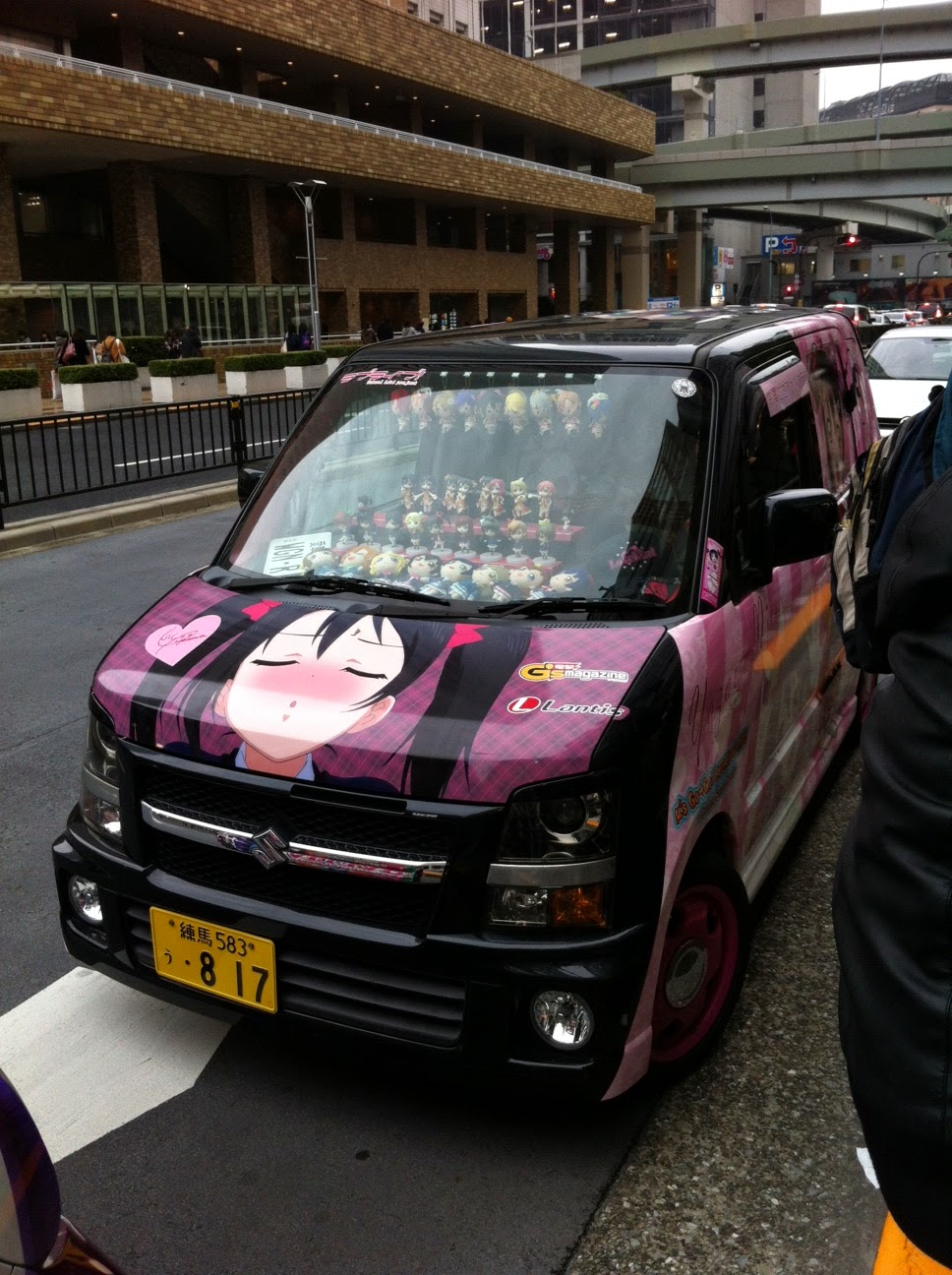 I was extra happy that I was able to visit AGF 2014 on the second day when I spotted a note on the official website that there were plans to hold a Sengoku Basara Judge End panel with Seki Tomokazu (Ishida Mitsunari) and Ookawa Tooru (Tokugawa Ieyasu). Obtaining the special tickets for the panel was extremely difficult (you had to reserve the second anime Blu-ray set at one specific branch of Animate and pay in cash before release date - a challenge when you live thousands of kilometres away from the store!) but I somehow made it, only to find that the seiyuu names had been removed from the event pages one month before AGF opened and replaced with an ominous 'to be confirmed' notice.

I have to say that the panel was planned very strangely. There were no announcements on the official Judge End website that it was happening, so you'd only know if you regularly kept up with Animate's own event listings. And by the time it was revealed it was no longer possible to buy standalone tickets for AGF any more, so you might not have been able to attend even if you were willing to travel to Tokyo and preorder the anime in time. Most people who wanted Judge End on Blu-ray or DVD would have placed their orders online already, surely, so unless this was an attempt to increase sales with the vague promise of seeing the seiyuu up close it seems very misguided.

Furthermore, I noticed several Japanese fans complaining online that the only Judge End event was being held at an festival for female gamers rather than somewhere more neutral. It's true that 99% of attendees at Sengoku Basara events seem to be female, but the handful of hardcore male fans probably wouldn't have felt very welcome amongst all of the romance games at AGF. We'll never know whether Judge End was unexpectedly popular outside of the series' usual demographic now.

Anyway, after cruelly leaving me to panic for several weeks - I'd been looking forward to seeing Seki and Ookawa, dagnabbit! - the official website finally posted an update to confirm that the panel was going ahead and that the guests would now be Ookawa and Hoshi Souichirou (Sanada Yukimura). Hoshi is adorable so I felt satisfied with the change of plans.

Given all of the negativity, I went in fully expecting to be the only person there if the panel happened at all; who goes to place a preorder for an unpopular Blu-ray/DVD at a specific Animate store in Tokyo to attend a mystery event without any confirmed guests? Thankfully, I wasn't the only one insane enough to take a leap of faith and the seating area was packed with around a hundred of my fellow otaku.

The panel felt far shorter than it was. Ookawa and Hoshi were in fine form, joking about how the audience were likely to be Sengoku Basara experts already when the MC tried to explain the original games to them. They performed a spontaneous live dialogue reading from episode 10 of the anime, which was perfect right up until the moment Ookawa decided to punctuate Ieyasu's speech by throwing a fake punch at Hoshi, complete with a silly sound effect. The two of them also talked about important scenes from the anime; Ookawa chose Tsuruhime's vision of Ieyasu's future since it revealed a darker side to a character who was usually so light and gentle, while Hoshi was interested in the first clash between Ieyasu and Yukimura where Shingen first falls ill.

Aside from some funny chit-chat and promises to see everyone again at Basara Matsuri next February, that was about it. Five lucky fans got to take home signed Judge End posters via a lottery drawing which made me very jealous! All in all, it was a fun panel. If only it had been longer than 45 minutes...

Animate Girls Festival was great fun, even if my feet won't forgive me for getting trapped in that long queue right at the start of the day. I spent far too much money at the corporate booths, so I'm thankful that the long lines for Rejet's goodies prevented me from destroying my budget even further!

Here are the Jooubachi series items I picked up (I forget to include them in the picture, but I also bought acrylic keychains of Ruby and Sumeragi). 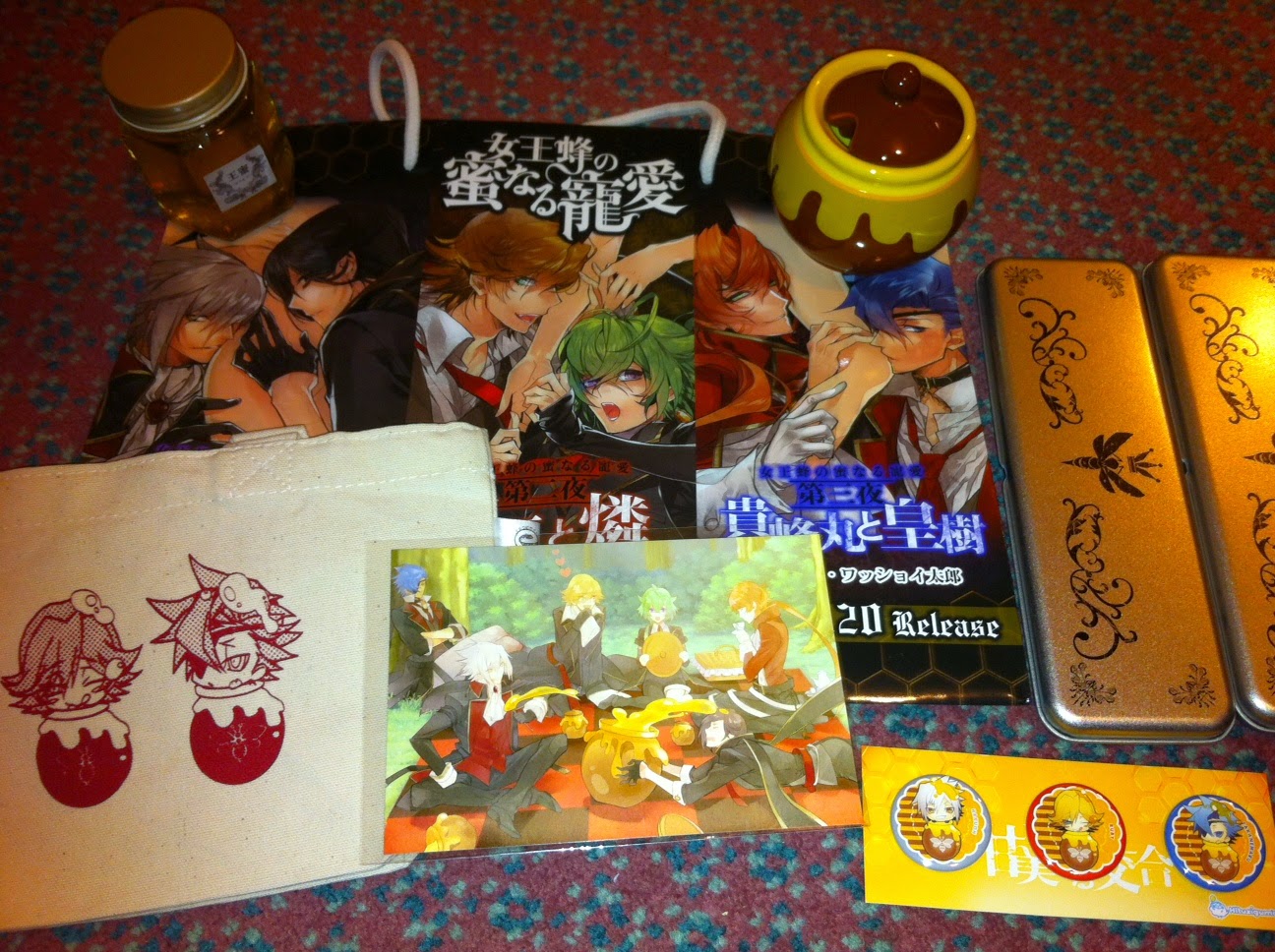 I'm not sure what I'll do with the jar of honey yet. It seems a shame to throw it away, but there's no way I can take it back to the UK with me.

The booth announced that there was going to be a novel about Hakuou and Menou (argh - that was the most annoying route in the Jooubachi No Oubou game). I hope there'll be novelisations for each of the other characters later on. There was also an announcement for a set of three 'versus' CDs called Jooubachi No Mitsunaru Chouai which I will definitely be buying, even if Ruby is partnered up with Rin for some reason and the goriness of Rin's route was a bit too much for me.

Anyway, I bought other things too! The Gekkan Shoujo Nozaki-kun goods included masking tape, a scrunchie, a clear file set, badges and stickers, mostly from a lottery. I wanted the Hori tape but I got two Kashima versions and a Nozaki instead; however, the scrunchie is the Hori version so I did well overall. The two CDs in the top right are the exclusive bundled discs which came with my group's tickets, and somehow I ended up buying a Tokyo Ghoul handkerchief. 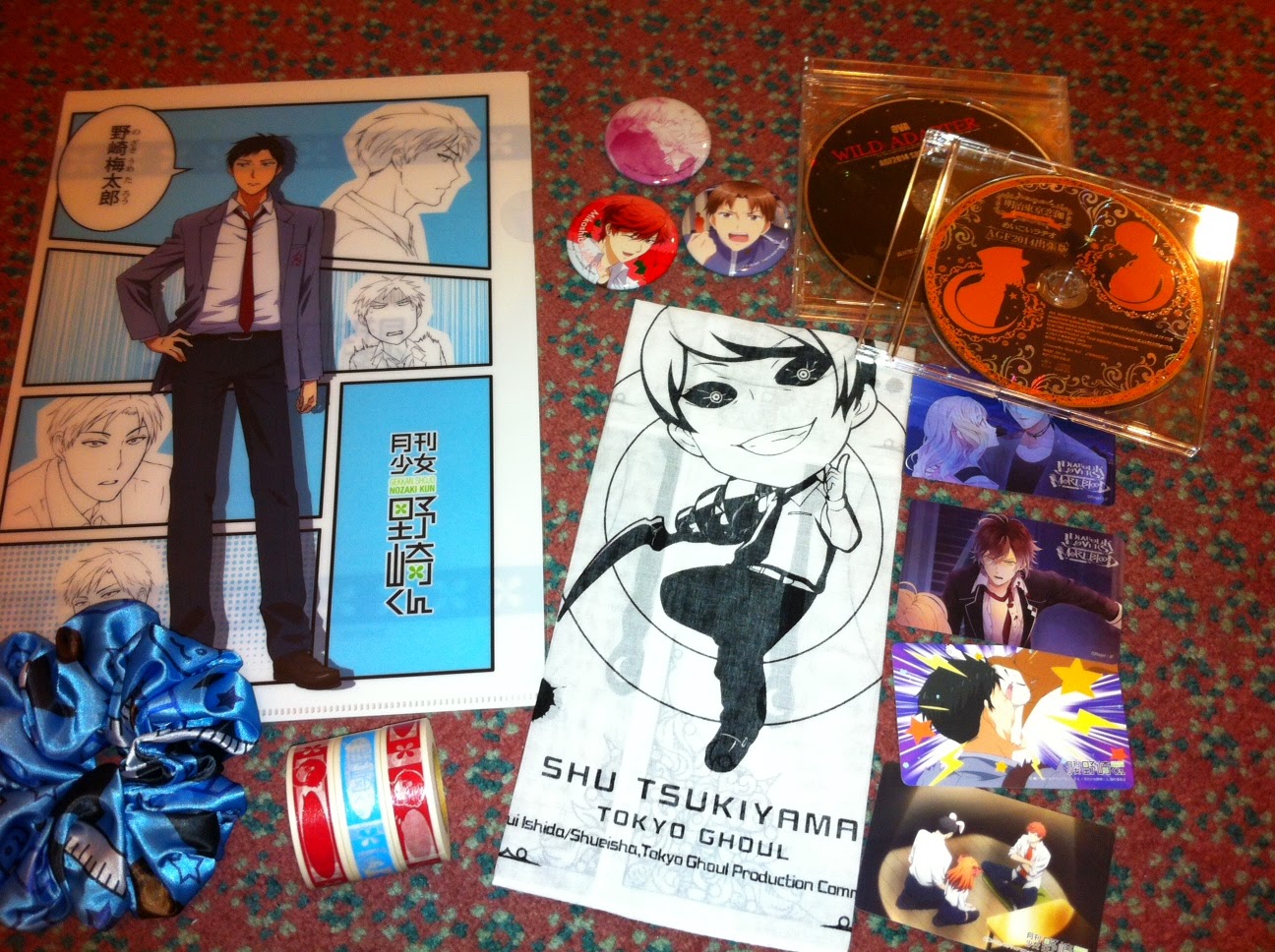 The D3 Publisher booth had some prerelease stock for the new Otoko Yukaku (Gyakuten Yoshiwara) CDs so I bought the first set with its bonus disc. They gave me postcards of the three characters too, and because I spent so much I received three chibi message cards via a lottery draw. 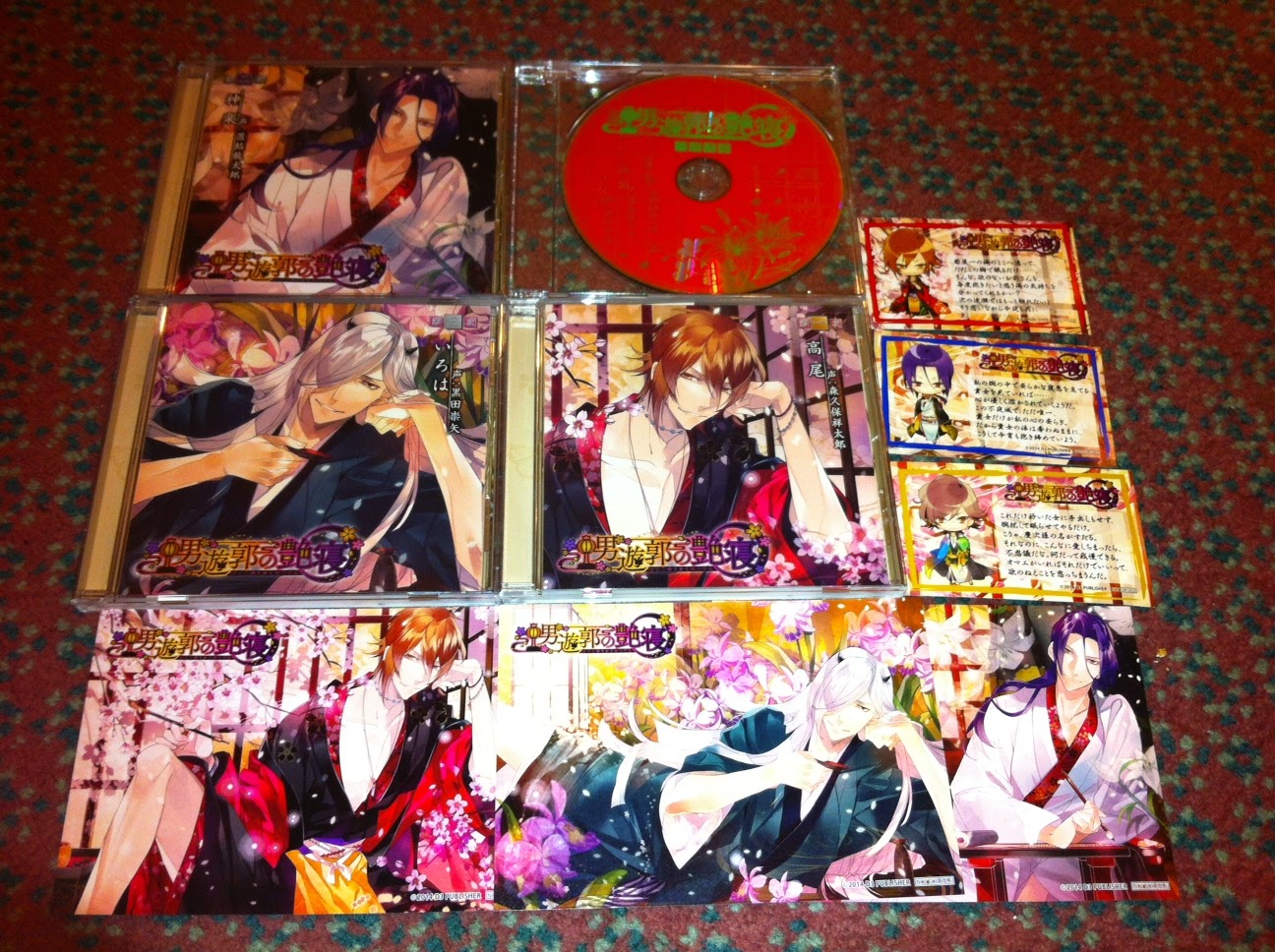 Lastly, it's impossible to leave AGF 2014 without amassing a huge collection of leaflets and promotional gifts. They're forced into your hands every time you approach a booth and there are tables of extra leaflets positioned at strategic locations too so people can find out more about titles they're interested in. This is a small sample of the stack of fliers I walked away with at the end of the day! 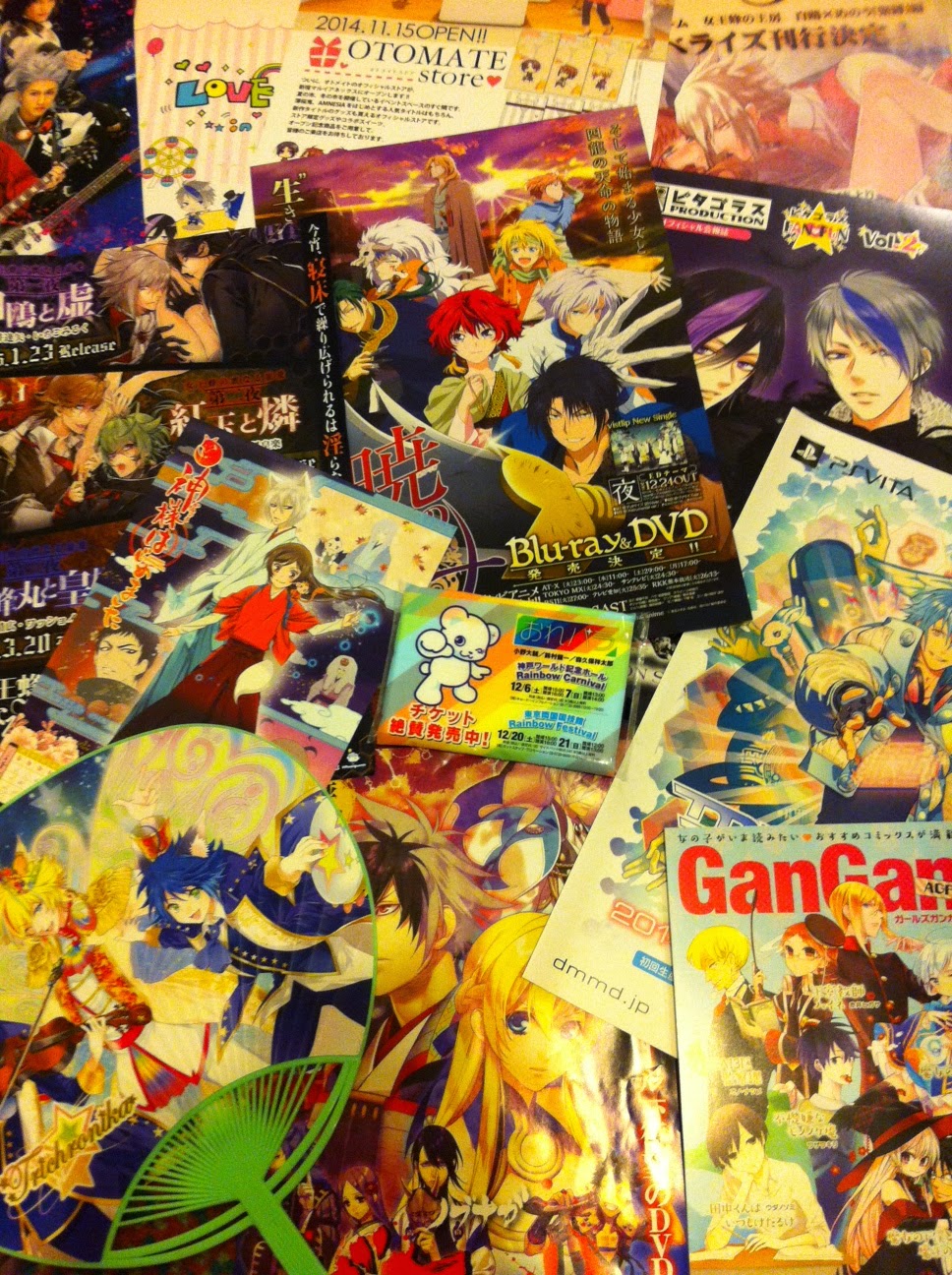 AGF 2014 was a fun day out and whether you like anime, gaming or bishounen I think it's safe to say there's something for everyone there. I wish London's MCM Expo events had this much official corporate support - back home we still seem to be debating whether women even have a place in the gaming industry at all, let alone celebrating them with a dedicated two-day event.
at 1:15:00 am