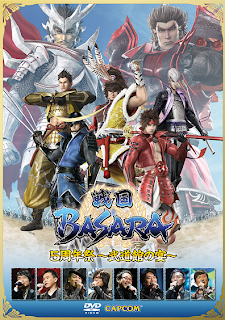 The fifth anniversary of Sengoku Basara was cause for considerable celebration; the landmark received a great deal of coverage even in the mainstream entertainment press. According to Capcom's press release at the time, Sengoku Basara 3 had sold more than 500,000 copies in Japan. Together with the warm reception to the anime and stage play spin-offs the series was showing no sign of losing its impetus.

Sengoku Basara Goshuunen ~Budoukan No Utage~ (Sengoku Basara Fifth Anniversary ~Budoukan Celebration~) was an event held at the famous Nippon Budoukan on Monday 3rd January 2011. Even with such a large venue there were two performances on that day, one in the afternoon and the other later in the evening. A rare post on the Capcom Europe blog mentioned that there were 16,000 attendees in total as well as reporters and officials. It's not surprising, then, that this has the most coverage online of all of the Sengoku Basara events. There's an excellent Livejournal post by user drkparadise which gives a summary of the event from the perspective of a member of the audience, and animercenary made a blog post with English translations for some of the content. Maybe this will mean my review will be more concise than usual.

The DVD version of the event was released on 5th August 2011 as a two-disc set costing ¥5,800. The first disc is filled with footage from the afternoon show and the second covers the evening; each disc has its own short compilation of backstage footage as well for a combined runtime of 246 minutes. As well as the two discs, the DVD case contains a 24-page colour booklet which is almost completely filled with photographs of the guests.

The list of seiyuu present for the celebration was generous:

And two familiar faces rounded out the list of personalities appearing on stage:

Live performances from T.M. Revolution, abingdon boys school and Ishikawa Chiaki are sadly absent from the DVD footage due to licensing issues.

Disc one starts off with a New Year themed introduction from Sasuke and Kasuga accompanied by footage from the anime, before an opening movie plays made up of clips of each character from the games next to their Tsuchibayashi Makoto artwork. This leads straight into a live performance of scenes from the Butai Sengoku Basara stage play. Looking back on it now, the live show was relatively unpolished and obviously had to make several compromises for the venue: the brighter lights changed the moody atmosphere completely, and they had to lip sync the performance instead of speaking their lines in person (which was rather noticeable). The actors all tried their hardest under the difficult conditions.

Once the stage play segment had finished, KobaP and T.M.Revolution's Nishikawa Takanori came on stage for a 'Special Talk Show'. They were both very excited and Nishikawa appealed to the audience to try to explain why he liked Kasuga's voluptuous anime design so much. The climax of this interview was all about the upcoming anime movie. On the DVD, this led neatly into KobaP's presentation about the latest Sengoku Basara news via a subtle cut in the video. He announced Sengoku Basara Chronicle Heroes and then went straight into other fifth anniversary news, such as the first series of gorgeous Sengoku Basara jerseys (Masamune and Yukimura themed) and a Sengoku Basara bread tie-in with Yamazaki Baking.

The seiyuu had been absent so far on the DVD version of the event, so the next performance was their Sengoku Drama Emaki - live performances of lines from the series. Nakai was almost unrecognisable dressed in his smart jacket (until I saw that he'd paired it with an old pair of jeans). I was satisfied with the large number of top quality character dialogues the staff had put together for this segment.

After the live dialogues had finished the seiyuu were all introduced and allowed to wish the audience a happy new year in character to start their talk show, 'Bushou De Ichimon Ittou'. KobaP asked them all to respond to a different Oda Nobunaga line from the anime. Nakahara's was the first and also the best; he deliberately butchered one of Nobunaga's most famous lines by saying, "No sacrificial pawn comes before me, no sacrificial pawn comes after me; I'm Sunday Mouri of the Church of Zabii!". I had to pause the video to give myself enough time to stop laughing. After that grand opening most of the other attempts subsequently fell flat (with amusing mockery from the rest of the seiyuu on stage). Nakai's response came last and set up a challenge to Nobunaga, which was met by the man himself when Wakamoto Norio came on stage as the surprise guest.

A very short discussion panel gave way to the ending ceremony featuring the seiyuu saying goodbye as their characters, then there was a very short finale which showed the music guests who had been cut from the rest of the footage. Nishikawa lapped up the fan applause, shaking his hips at everyone and showing off his intricate battle-themed performance outfit.

Thirteen minutes of backstage clips finished off the first disc. These were the usual silly messages from the cast filmed while other people were on stage and some short scenes of the stage play performance filmed from the side of the venue to give it a different perspective. There are even some illicitly-filmed moments where you can hear 'crosswise' being performed live in the background. I love the backstage footage even though it doesn't last long; it makes it easy to imagine how nerve-wracking standing on that enormous stage must be. Especially for the seiyuu, whose job doesn't usually require them to be the centre of attention like this.

One of the stranger - though not unwelcome - aspects of this DVD release comes from both events on the day being very similar. Usually this means that one will be present in its entirety while the other is reduced to a highlights reel, but for the Budoukan No Utage DVD set they've made a rare exception and included all of the permitted footage from both the afternoon and evening shows. This means that viewers are treated to a second, near-identical version of the whole event on disc two.

The introduction and stage play performance were largely the same as before. The stage play felt more polished in the evening for some reason and the lighting seemed more atmospheric; I'm not sure whether this was just down to better camera angles on the DVD recording or if they actually made some changes between the two shows.

The unscripted evening 'Special Talk Show' between KobaP and Nishikawa was almost a continuation of the earlier chat session, with a return to Nishikawa explaining the appeal of Kasuga's character design (including hand motions). KobaP's news corner simply repeated the information from the afternoon event. There's no need to watch it again unless you enjoy watching KobaP talk dressed in formal attire.

I've found with stage events that the later shows tend to be more polished than the first ones, so I was amused by Hoshi's mistakes during the Sengoku Drama Emaki drama readings. First he said Kojuurou's name incorrectly and handled it very gracefully by apologising in character without missing a beat, then later on he turned up a little late to start off a four-way dialogue from Battle Heroes. This tiny delay made the spirited exchange with Morita at the start of the scene even funnier.

In the evening version of the 'Bushou De Ichimon Ittou' corner, the seiyuu guests were asked to respond to lines from Toyotomi Hideyoshi. Their responses were pretty terrible until the end when Okiayu appeared singing a rousing song a cappella with his deep voice. Later on in the backstage footage it's revealed that he was performing all of his lines for the segment live backstage (I thought they were prerecorded clips from the anime). He was also grinning at the responses Hideyoshi received from the other seiyuu.

The remainder of the footage was very similar to that on the first disc.

Because large amounts of the event were removed the pacing of the DVD footage was strange; it felt as though the stage play cast could have appeared on stage more and the two surprise guests hardly had any time to speak. Compared to the more recent Basara Matsuri recordings I have to say that this one is one of the most skippable if you're collecting live event DVDs on a limited budget. It's like a 'best of' compilation CD without much unique material to set it apart.

Still, it was terrific to see the huge number of fans gathered in the Budoukan seating all to celebrate the Sengoku Basara series. I hope that the next milestone in the series will be even more impressive.